Lytic and Lysogenic Life cycle of a phage 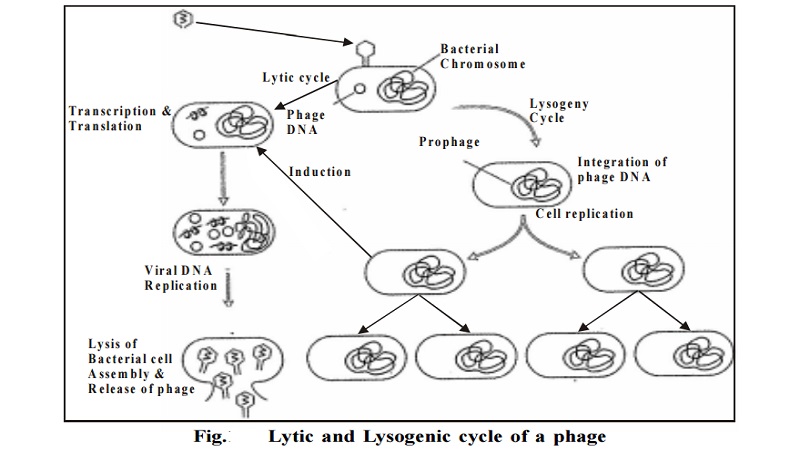 Intra cellular multiplication of the phage ends in the lysis of the host bacterium and the release of progeny virions. Replication of a virulent phage takes place in the following stages. 1. Adsorption 2.Penetration 3.Synthesis of phage components 4.Assembly 5.Maturation 6.Release of progeny phage particles

Life cycle of a phage

Intra cellular multiplication of the phage ends in the lysis of the host bacterium and the release of progeny virions. Replication of a virulent phage takes place in the following stages.

The attachment of the phage to the surface of a susceptible bacterium by means of its tail is called adsorption. Host specificity of the phage is determined in the adsorption stage of the cycle itself. Artificial injection by direct injection of phage DNA can be achieved even in strains of bacteria that are not susceptible to the phage. The infection of a bacterium by the naked phage nucleic acid is known as transfection.

The process of penetration resembles injection through a syringe. The phage DNA is injected into the bacterial cell through the hollow core. After penetration the empty head and the tail of the phage remain outside the bacterium as the shell.

During this stage synthesis of bacterial protein, DNA, and RNA ceases. On the other hand, phage DNA, head protein and tail protein are synthesized separately in the bacterial cell. The DNA is compactly ' packaged' inside the polyhedron head and finally the tail structures are added.

The assembly of phage components into mature infectious phage particle is known as (5) Maturation.

Release of phages typically takes place by the lysis of the bacterial cell. During the replication of phages, the bacterial cell wall is weakened and it assumes a spherical shape and finally burst or lyse. Mature daughter phages are released.

The prophage confers certain new properties on the bacterium. This is called lysogenic conversion or phage conversion. An example is toxin production by the Diptheria bacillus which is determined by the presence of prophage beta. The elimination of prophage abolishes the toxigenicity of the bacillus.