All blood cell types, including lymphocytes, are derived from hematopoietic stem cells (HSC). By definition a stem cell must be capable of both self-renewal and differentiation.

All blood cell types, including lymphocytes, are derived from hematopoietic stem cells (HSC). By definition a stem cell must be capable of both self-renewal and differentiation. Self-renewal is the ability to give rise to at least two daughter cells at the same stage of de-velopment as the parent. Differentiation is the orderly sequence of events that leads to cell maturation, resulting in the progressive loss of self-renewal capacity and an increasingly restricted lineage potential. This is associated with the silencing or activation of given genes such as cytokine receptors, signal transduction molecules, or transcription factors. Hematopoietic stem cells give rise to a common lymphoid progenitor cell, which expresses upregulated interleukin-7 (IL-7) receptor and a variety of membrane markers (CD34 is the most characteristic marker of the common lymphoid progenitor cell). This progenitor cell gives rise to all lymphoid lineages—T lymphocytes, B lymphocytes, natural killer (NK) cells, and dendritic cells (DC).

B. Cytokines in Lymphocyte Ontogeny

The self-renewal capacity of the stem cells is dependent on growth factors such as GM-CSF, G-CSF, IL-3, and IL-5. Expression of CD132, the IL-2R common γ(γ c) subunit (shared by the membrane bound receptors for IL-2, IL-4, IL-7, IL-9, and IL-15), is a phenotypic marker for the common lymphoid progenitor cells. Progenitor cells that express both c and the IL-7 receptor (IL-7R) have lost the capacity for myeloid differentiation and are restricted to the lymphoid lineage.

These receptors, however, are not just differentiation markers; they are required for lymphoid cell differentiation. This was made clear by the study of patients with c-gene de-ficiency . These patients had defects in T-, B-, and NK-cell development and suffered from X-linked severe combined immunodeficiency.

The lack of differentiation of lymphocytes in patients with γc-gene deficiency is ex-plained by the fact that IL-7, produced by bone marrow stromal cells and by thymic ep-ithelial cells, delivers a signal needed for the differentiation of pre–B cells and for the pro-liferation of double negative thymocytes. Not surprisingly, disruption of the IL-7R eliminates all lymphoid development. NK-cell development is also affected because it is critically dependent on IL-15, one of the many cytokines that shares common structural units with the IL-2 receptor, in this case both the common γc subunit and the chain (CD122).

A balance of activating and inhibitory signals mediated by lymphocyte membrane mark-ers controls the immune system. Signals transmitted by the ligation of antigen receptors on T and B cells may induce cellular migration, proliferation, differentiation, anergy, or apoptosis. Several factors that influence the outcome include antigen concentration, bind-ing avidity, duration of antigen recognition, association with costimulatory molecules or cytokines, and the developmental stage of the lymphocyte. In addition to the antigen receptors, other lymphocyte membrane markers also serve as receptors capable of delivering activation or inhibition signals to the cell. While the presence of inhibitory recep-tors was first recognized in NK cells and subsets of T cells (see Sec. VII.B), inhibitory receptors are also found on subsets of B cells, monocytes, macrophages, and dendritic cells.

Lymphocytes start to differentiate into separate lineages early in fetal life (Fig. 10.1). In hu-mans, the embryonic yolk sac of the developing embryo is the first hematopoietic structure that forms stem cells, which develop into leukocytes, erythrocytes, and thrombocytes. The fetal liver receives stem cells from the yolk sac at the 6th week of gestation and begins hematopoietic activity at that point in time, reflected by the finding of NK cells in the fetal liver prior to formation of the thymic rudiment. In the 12th week a minor contribution is made to the production of blood cells by the spleen. 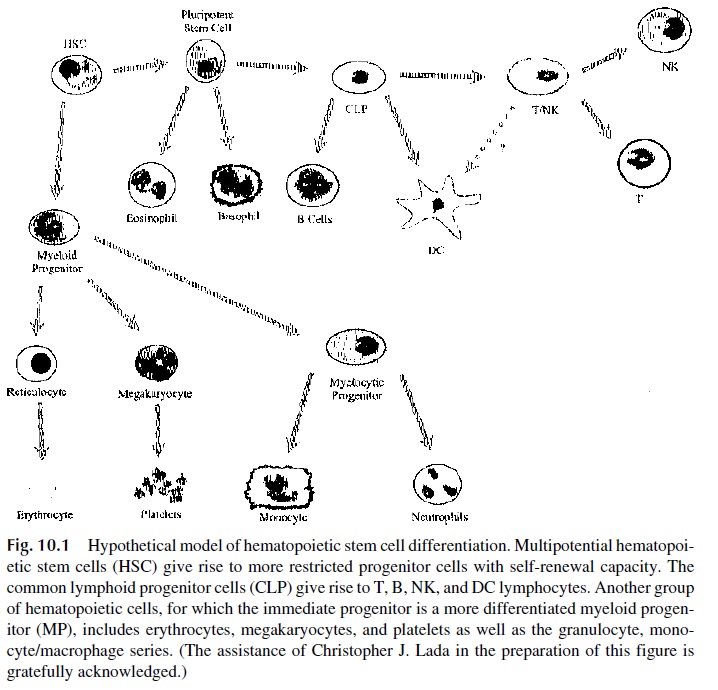 At 20 weeks of gestation, the thymus, lymph node, and bone marrow begin hematopoietic activity. The bone marrow becomes the sole hematopoietic center after 38 weeks. At that time, differentiated T and B lymphocytes are present in the circulation. In the adult, T cells represent 55–84% of the circulating peripheral blood lymphocytes, B cells 6–25%, and NK cells 5–27%.