Approaches to the Study of Lymphocyte Diversity and Ontogeny

Lymphocyte type, maturation stage, and activation state are now routinely identified by the presence or absence of certain markers expressed on the cell membrane.

APPROACHES TO THE STUDY OF LYMPHOCYTE DIVERSITY AND ONTOGENY

Lymphocyte type, maturation stage, and activation state are now routinely identified by the presence or absence of certain markers expressed on the cell membrane. Approximately half of the membrane markers on leukocytes are members of the immunoglobulin gene su-perfamily . The functions of the proteins included in this superfamily are di-verse: immune recognition, embryonic development, cell adhesion, signal transduction, and receptors for growth factors. The notable feature of these proteins is the presence of one of more immunoglobulin-like domains. These domains—approximately 100 amino acids in length—are characterized by a common fold formed between two antiparallel sheets stabilized by a disulfide bond. The result is a conserved structural platform that allows for the display of unique determinants required for specific ligand-binding.

The identification of cell surface markers is accomplished through the use of mono-clonal antibodies. The development of this innovative technology resulted in a Nobel Prize and has been invaluable in the study of immunology as well as many other areas of biology.

1. The Production of Monoclonal Antibodies

In the 1970s Kohler and Milstein conceived the groundbreaking procedure for the produc-tion of monoclonal antibodies. They fused malignant plasma cells with antibody producing B lymphocytes. This fusion produced hybrid cells or hybridomas that could proliferate like transformed cells and produce the specific antibody from the parental B cell. The process, summarized in Fig. 10.2, involves two cell populations and three major steps: fusion, se-lection, and screening. 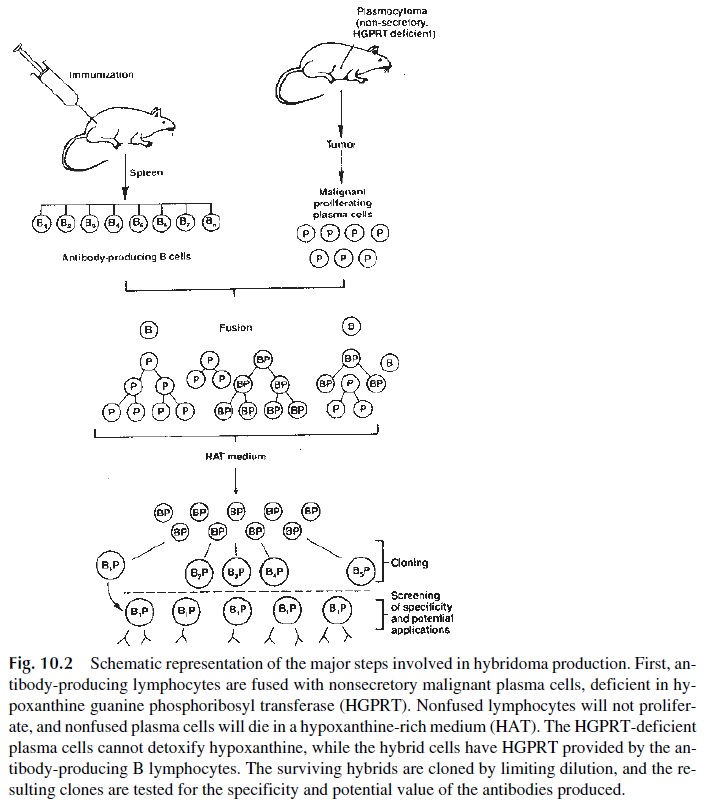 ·              A malignant plasma cell line of mouse or rat origin, unable to secrete immunoglob-ulins and deficient in a critical enzyme that allows cells to synthesize purines from hypoxanthine (hypoxanthine guanine phosphoribosyl transferase, HG-PRT).

·              A suspension of spleen cells obtained from a normal mouse or rat harvested at the peak of an induced immune response. The spleen cell suspension will contain a large number of B-lymphocyte clones, each clone producing a single anti-body against one given epitope.

The two cell populations are fused, usually by incubation in the presence of polyethylene glycol. The fused B lymphocyte will provide the resulting hybridoma with the capacity to produce a specific antibody and the capacity to produce HGRPT; the fused plasmocy-toma cell will provide the hybridoma with the capacity to proliferate indefinitely. In con-trast, nonfused B cells will die after a few rounds of replication. To eliminate nonfused, HGPRT-deficient, malignant plasmocytoma cells, the mixture of fused and nonfused cells is grown in a medium (HAT) containing hypoxanthine and aminopterine (which blocks the remaining intracellular pathways for the synthesis of purines). Under those conditions, only fused cells able to utilize hypoxanthine for the synthesis of purines will survive.

A lengthy screening process follows, the aim of which is to select from the large number of hybrids produced by fusion those clones that produce antibody against anti-gens of interest. This “cloning” process involves the preparation of limiting dilutions or cell sorting of the hybridomas. Single cells are seeded into individual receptacles con-taining tissue culture medium and allowed to grow into clones producing antibody of a single specificity (monoclonal antibody). Monoclonal antibodies generated in this process have a wide range of uses, including basic research, diagnostic purposes, and therapeutic protocols.

Hundreds of monoclonal antibodies identifying different membrane markers on lympho-cytes and other cell types have been generated. These cell surface antigens are complex molecules expressing many different epitopes. Accordingly, monoclonal antibodies raised in different laboratories often recognize slightly different parts of the same molecule. His-torically each laboratory would identify a molecule by a unique name, often the name of the monoclonal antibody recognizing the molecule or antigen. Soon the field became rather complicated, as each cell surface molecule was known in the literature by several different names. As a consequence, the World Health Organization (WHO) sponsored workshops in order to establish a standardized nomenclature for the molecules found on the surface of leukocytes.

The participants of the workshops, held periodically, evaluate newly developed mon-oclonal antibodies, verify which cellular antigen they recognize, and assign uniform desig-nations to these molecules. A given cellular antigen recognized by novel monoclonal anti-bodies is designated by the initials CD, for clusters of differentiation (a designation that recognizes the fact that each marker has multiple antigenic determinants), followed by a number. The numerical designations are assigned based partly on the order of discovery, and partly on the ontogenic order of appearance. For instance, the monoclonal antibody rec-ognizing what, at the time, was considered ontogenetically as the most primitive T lym- phocyte membrane marker, was designated as CD1, and the T lymphocytes expressing it are known as CD1+ .

Technical progress in molecular genetics has resulted in the cloning and sequencing of im-munoglobulin genes, TcR genes, as well as genes coding for other cellular antigens. Often the genes are cloned and sequenced before the function of the molecule they code is de-fined. The role of various cellular antigens and cytokines in the development of an immune response and lymphocyte ontogeny has been greatly enhanced by the genetic manipulation of experimental animals. Transgenic animals express the genes of another species (most commonly human genes are inserted into the germline of mice), whereas “knockout” mice have a specific gene disrupted or deleted. The cross breeding of transgenic and knockout mice has generated animals that express only the human form of a given gene. Sophisti-cated experimental systems have been developed using these animals to dissect the com-plexities of the immune system such as ontogeny, education, and tolerance.