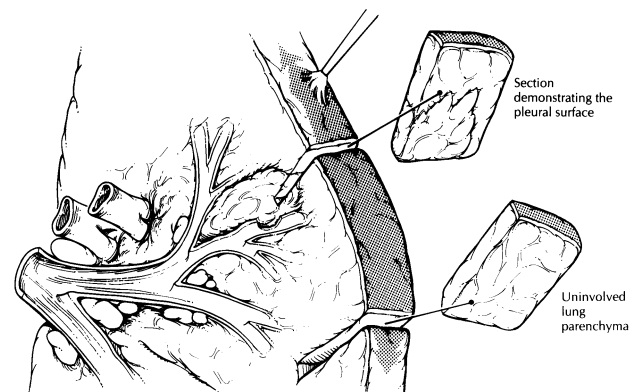 The largest lung specimens consist of lobecto-mies and pneumonectomies. These procedures are usually done to remove neoplasms, although pneumonectomies for non-neoplastic lung dis-ease are encountered in some medical centers performing lung transplantations. When a tumor directly invades beyond the pleura, these specimens may also include an en bloc resection of the involved adjacent structures (e.g., chest wall, left atrium, or diaphragm).

Weigh, measure, and anatomically orient the specimen while it is fresh. One quick and easy way to orient the specimen is to inspect the struc-tures at the lung hilum. On the left side the pul-monary artery is situated superior to the airway, while on the right side it is situated anterior to the airway. Also, the right side has three lobes, whereas the left side has two and a prominent lingular segment. Carefully inspect the pleural surfaces. Look for the presence of pleural retrac-tion, because this finding suggests the presence of an underlying neoplasm. Palpate the intact specimen: Is the tumor located centrally or pe-ripherally? Which lobe of the lung appears to be involved? Does the tumor extend across a fis-sure to involve more than one lobe?

The lung may be processed in either the fresh or the fixed state. If immediate dissection of the specimen is not required, it is best to fix the speci-men in distention. Infuse formalin directly into the large airways, and submerge the entire speci-men in formalin for overnight fixation. Take care not to overdistend the lung.

If you remember each of the five basic compo-nents of the lung (airways, lymph nodes, vessels, parenchyma, and pleura), then your description and dissection can be carried out in a simple and systematic fashion. Many proximal lung tumors arise from the airways, and so we find it most helpful to start the dissection with the airways. Begin by removing the bronchial and vascular margins as shave sections. Next, expose the bron-chial mucosa by opening the large airways out to the subsegmental branches with small scissors. Carefully examine the mucosa of the airways, because subtle changes in the appearance of the mucosa may indicate a premalignant lesion. Similarly, open the large pulmonary vessels and evaluate them for invasion by tumor.

By dissecting the larger airways, you have op-portunely exposed the regional lymph nodes, and these should be sampled at this time. Direct the search for lymph nodes to the soft tissues at the hilum and to the lung parenchyma immedi-ately surrounding the airways. Lymph nodes are often easily visualized by their black (anthracotic) pigmentation. It is generally not necessary to fur-ther designate these peribronchial lymph nodes. The status of the various mediastinal lymph node groups is crucial to the staging of lung tumors. These lymph node groups are usually separately submitted and labeled by the surgeon, although pneumonectomies may be accompanied by at-tached hilar lymph nodes. Such lymph nodes should be identified by their location in the hilum of the lung and specifically designated “hilar lymph nodes.”

Section the lung parenchyma in the plane that best reveals the pathologic process and its relationship to the surrounding structures of the lung. For proximal lung tumors, this relationship can best be demonstrated by sectioning the lung along the plane of the involved airways. As illus-trated, this can be accomplished by first placing probes into the airways that have already been partially opened and then using these probes to help guide your knife through the lung paren-chyma. In this manner, one can determine the origin and size of proximal tumors and evalu-ate the lung parenchyma distal to the tumor. The remaining lung parenchyma can then be sec-tioned at 1-cm intervals. For peripherally located tumors, a site of origin from an airway may not be apparent. In these instances, serial sections through the tumor perpendicular to the closest segmental bronchus may best reveal the relation-ships of the tumor to the pleura, to the surround-ing lung parenchyma, and to the small airways.

For non-neoplastic lung diseases, section the specimen in a manner that best correlates with the radiographic studies. For example, thin serial sections of the fixed specimen in the transverse plane can be used to arrive at a one-to-one cor-relation between changes identified in computed tomography scans and the pathology. In the de-scription of these large lung specimens, do not lose sight of the systematic approach that in-cludes descriptions of all five basic components of the lung.

For specimens that harbor a neoplasm, the major aims of tissue sampling for histology are to document the tumor type, the origin of the tumor, the extent of the tumor (local and metastatic), and the adequacy of tumor resection. To assess tumor type, submit four sections of tumor, both from the center of the tumor and from the inter-face of the tumor with the surrounding lung tissue. Make every effort to demonstrate the rela-tionship of the tumor to an associated airway. For more proximal tumors with an apparent en-dobronchial component, take sections along the involved airway to include both tumor and bron-chus. For peripheral lesions, a site of origin from a small airway may not be apparent. In these cases, take sections through the tumor in a plane perpendicular to the airways. Document tumor extension to or through the pleura with sections taken at right angles to the pleura in areas of retraction. Similarly, take sections of tumor extension into the pulmonary vessels, hilar soft tissues, and chest wall. Submit all lymph nodes identified in the hilar and peribronchial regions. If the specimen also contains a portion of chest wall, take sections and margins from all of the attached structures (parietal pleura, skin, soft tissues, and ribs), as if this block were its own specimen. Finally, submit sections of non-neoplastic lung from each lobe, including sections taken distal to the tumor for documentation of an obstructive pneumonic process.

For diffuse non-neoplastic processes, submit representative sections of lung parenchyma from each lobe as well as sections of proximal airways. If a focal lesion is encountered, section it in the manner described above for a neoplasm. 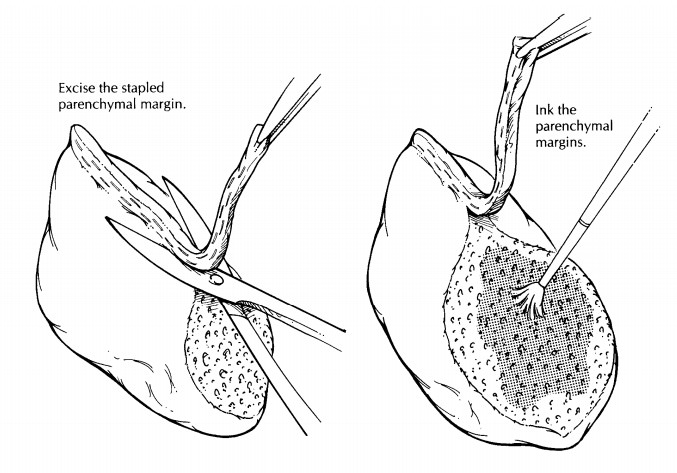 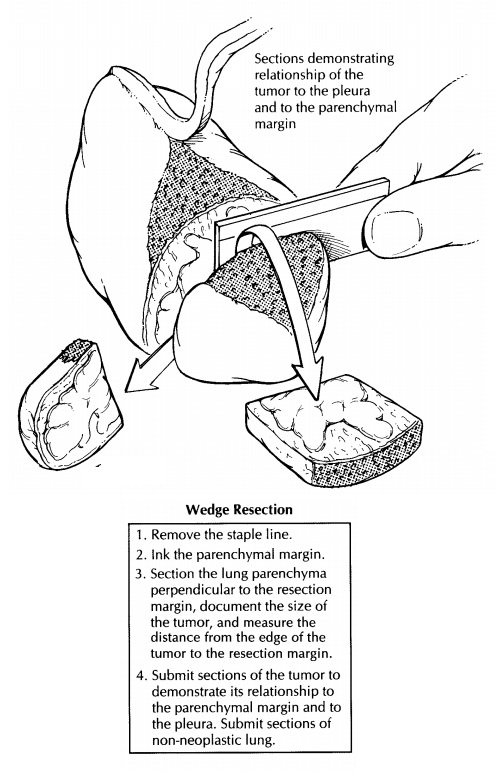 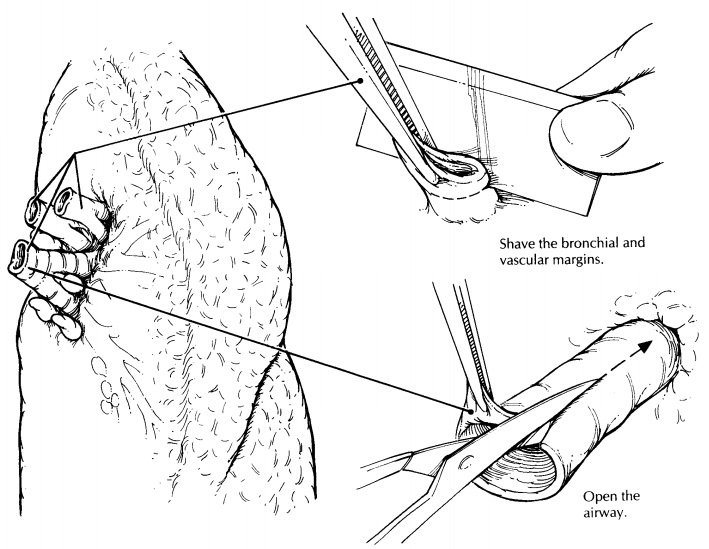 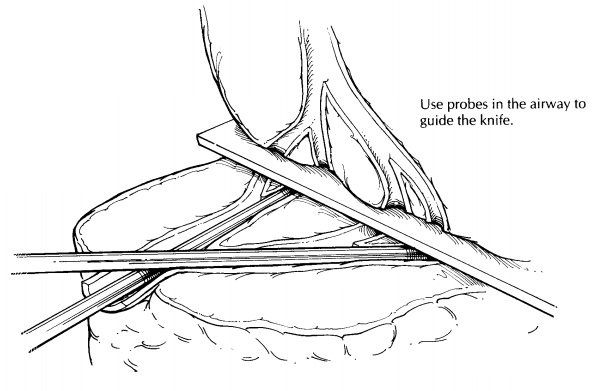 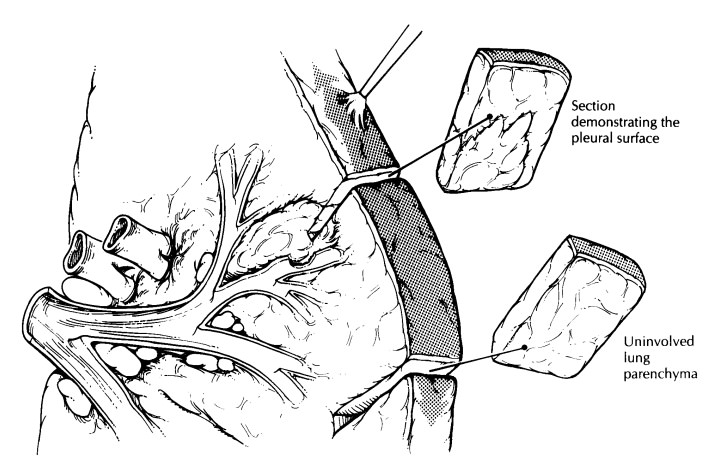 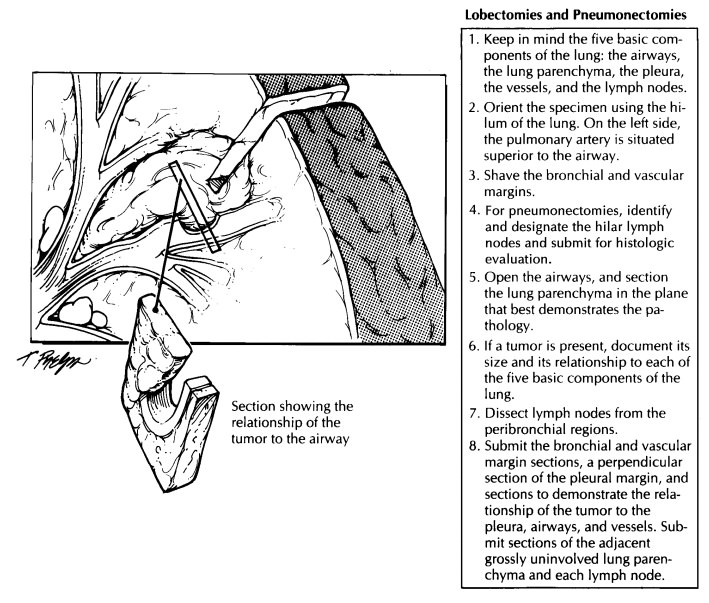