Does anyone know the importance of lubrication and cooling systems in an engine?

The lubrication and cooling system of an internal- combustion engine is very important. If the lubricating system should fail, not only will the engine stop, but many of the parts are likely to be damage beyond repair. Coolant protects your engine from freezing or overheating.

What lubrication system does for an engine?

1.     The job of the lubrication system is to distribute oil to the moving parts to reduce friction between surfaces which rub against each other.

3.       The pump is driven by a worm gear off the main exhaust valve cam shaft.

5.     Small holes in the feed line allow the oil to drip inside the crankcase.

6.     The oil drips onto the pistons as they move in the cylinders, lubricating the surface between the piston and cylinder.

7.     The oil then runs down inside the crankcase to the main bearings holding the crankshaft.

8.     Oil is picked up and splashed onto the bearings to lubricate these surfaces.

9.     Along the outside of the bottom of the crankcase is a collection tube which gathers up the used oil and returns it to the oil pump to be circulated again.

Ø Internal oil leak (blow-by) will result in blue smoke at the tale pipe.

Ø As it circulates through the engine, the oil picks up metal particles and carbon, and brings them back down to the pan.

Ø When heavy loads are imposed on the bearings, the oil helps to cushion the load.

Ø Viscosity is a measure of oil’s resistance to flow.

Ø A low viscosity oil is thin and flows easily

Ø A high viscosity oil is thick and flows slowly.

Ø As oil heats up it becomes more viscous (Becomes thin)

Proper lubrication of an engine is a complex process.

Motor oil must perform many functions under many different operating conditions. The primary functions of oil are listed below:

1. Provide a barrier between moving parts to reduce friction, heat buildup, and wear.

2. Disperse heat. Friction from moving parts and combustion of fuel produce heat that must be carried away.

3. Absorb and suspend dirt and other particles. Dirt and carbon particles need to be carried by the oil to the oil filter where they can be trapped.

4. Neutralize acids that can build up and destroy polished metal surfaces.

5. Coat all engine parts. Oil should have the ability to leave a protective coating on all parts when the engine is turned off to prevent rust and corrosion.

6.  Resist sludge and varnish buildup. Oil must be able to endure extreme heat without changing in physical properties or breaking down.

What the cooling system does for an engine.

1.     Although gasoline engines have improved a lot, they are still not very efficient at turning chemical energy into mechanical power.

2.     Most of the energy in the gasoline (perhaps 70%) is converted into heat, and it is the job of the cooling system to take care of that heat. In fact, the cooling system on a car driving down the freeway dissipates enough heat to heat two average-sized houses!

4.     The engine in your car runs best at a fairly high temperature.

6.     So another important job of the cooling system is to allow the engine to heat up as quickly as possible, and then to keep the engine at a constant temperature. 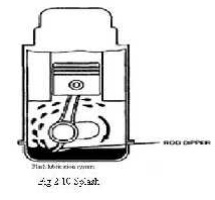 The splash system is no longer used in automotive engines. It is widely used in small four-cycle engines for lawn mowers, outboard marine operation, and so on. In the splash lubricating system , oil is splashed up from the oil pan or oil trays in the lower part of the crankcase. The oil is thrown upward as droplets or fine mist and provides adequate lubrication to valve mechanisms, piston pins, cylinder walls, and piston rings.

In the engine, dippers on the connecting-rod bearing caps enter the oil pan with each crankshaft revolution to produce the oil splash. A passage is drilled in each connecting rod from the dipper to the bearing to ensure lubrication. This system is too uncertain for automotive applications. One reason is that the level of oil in the crankcase will vary greatly the amount of lubrication received by the engine. A high level results in excess lubrication and oil consumption and a slightly low level results in inadequate lubrication and failure of the engine.

Combination of Splash and Force Feed: 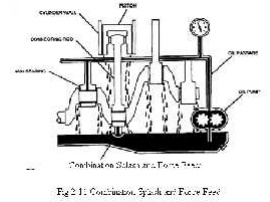 In a combination splash and force feed , oil is delivered to some parts by means of splashing and other parts through oil passages under pressure from the oil

pump. The oil from the pump enters the oil galleries.

From the oil  galleries,  it  flows  to  the main  bearings and camshaft

At very high speeds these oil streams are powerful enough to  strike the   dippers   directly.   This   causes  a   much   heavier   splash  so  that adequate lubrication of the pistons and the connecting-rod bearings is provided at higher speeds. If a combination system is used on an overhead valve engine, the upper valve train is lubricated by pressure from the pump. 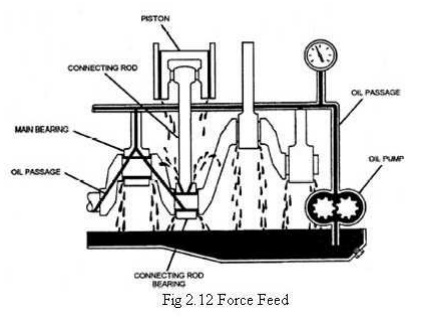