•        The carburetor worrks on Bernoulli's principle: the faster air mo ves, the lower its static pressure, and the higher its dynamic pressure.

•        The throttle (accelerator) linkage does not directly control the flow of liquid fuel. Instead, it actuates carburetor mechanisms which meter the flow of air being pulled into the engine.

•        The speed of this fl ow, and therefore its pressure, determines the a mount of fuel drawn into the airstream.

•        When carburetors are used in aircraft with piston engines, speci al designs and features are needed to prevent fuel starvation during inverted flight. Later en gines used an early form of fuel injection kn own as a pressure carburetor. 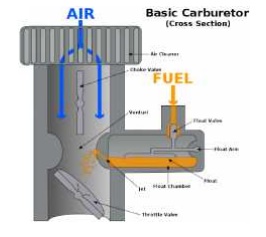 Ø    Fuel injection is a system for admitting fuel into an internal combustio n engine.

Ø The primary differe nce between carburetors and fuel injection is that fuel injection atomizes the fuel by forcibly pumping it through a small nozz le under high pressure, while a carburetor relies on suction created by intake air accele rated through aVenturi tube to draw the fuel into the airstream.

Ø Fuel is transported from the fuel tank (via fuel lines) and pressuri sed using fuel pump(s). Maintaining the corr ect fuel pressure is done by a fuel pressure regulator.

Ø Often a fuel rail is u sed to divide the fuel supply into the requir ed number of cylinders. The fuel injector injects liquid fuel into the intake air.

Ø When signalled by the engine control unit the fuel injector opens and sprays the pressurised fuel into the engine.

Ø The duration that the injector is open (called the pulse width) is proportional to the amount of fuel delivered.

Ø Depending on the system design, the timing of when injector opens is either relative each individual cylinder (for a sequential fuel injection system), or injectors for multiple cylinders may be signalled to open at the same time (in a batch fire system).

Ø Multiport fuel injection injects fuel into the intake ports just upstream of each cylinder's intake valve, rather than at a central point within an intake manifold.

Ø The intake is only slightly wet, and typical fuel pressure runs between 40-60 psi.