The first internal-combustion engine, according to our modern ideas, was that of Robert Street, patented in England in 1794.

The first internal-combustion engine, according to our modern ideas, was that of Robert Street, patented in England in 1794. In this the bottom of a cylinder was heated by fire and a small quantity of tar or turpentine was projected into the hot part of the cylinder, forming a vapor. The rising of the piston sucked in a quantity of air to form the explosion mixture and also flame for ignition. The cycle was that which was used later by Lenoir in the first commercially successful engine. About 1800 Phillippe Lebon patented in France an engine using compressed air, compressed gas and electricity for ignition. Some authorities believe that his early death retarded the development of the internal-combustion engine half a century, as all of the features mentioned are necessary to the highly efficient engines of today, though they did not come into use for three-quarters of a century after his death.

The well-known Otto engine was invented by Dr. Nicholas Otto, of Germany, and was patented in this country in 1877. It follows the cycle that has been described by Beau de Rochas , now known as the four-cycle, or sometimes as the Otto cycle. The engine was first known as the Otto-Silent, to distinguish it from the free-piston engine, which was rather noisy. It immediately established the internal-combustion engine on a firm footing, and the engines of the four-cycle type sold today show merely minor improvements.

The development of the Diesel engine for oil began about 1894. As has been stated, this engine is similar to the Brayton. Air is compressed to about 500 pounds pressure and oil is sprayed into this highly compressed air. It burns spontaneously at nearly constant pressure, which is followed by a long expansion. The extremely high temperature of the air previous to the injection of the fuel, and the high temperature maintained during this injection, together with the long expansion, give the engine the highest efficiency of any thermal motor. The development of the Diesel engine has been so recent that it is not necessary to elaborate upon it. At this time, it is being manufactured in all of the European countries and in America, and there is a tendency on the part of many of the American manufacturers who are bringing out new engines to adopt the features of the Diesel. The gas turbine is as yet in the experimental stage. A number have been built and are of course, extremely interesting. The success of the steam turbine has encouraged many to believe that the gas turbine will achieve similar success. Nothing of recent development can be said to encourage this view. The difficulties in the way of successful gas turbines are very great, and while some turbines have been designed and run, none of them has shown an efficiency at all comparable to that of ordinary four-cycle engines.

The Concept of IC Engine

The internal   combustion   engine (ICE) is   an engine where the combustion of a fuel (normally  a fossil  fuel)  occurs  with  an oxidizer  (usually  air) in  a combustion chamber that is an integral part of the working fluid flow circuit.

The most significant improvement offered by the Concept IC Engine:

Ø The most significance of IC engine in Day to day life, It is a lightweight and reasonably compact way to get power from fuel.

Ø It is also significantly safer and more efficient than the engine it replaced - steam.

Ø Small, lightweight IC engines made personal transportation possible. It transformed how we built cities and did business. 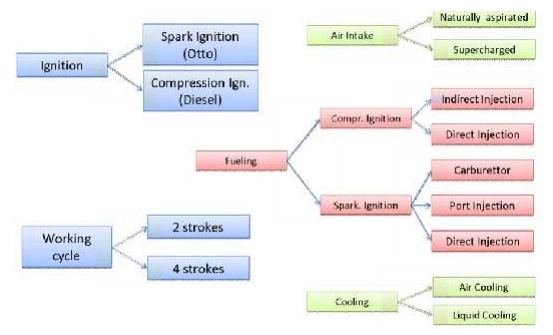