An IPv4 address is a 32-bit address that uniquely and universally defines the connection of a device (for example, a computer or a router) to the Internet. IPv4 addresses are unique.

There are two prevalent notations to show an IPv4 address: binary notation and dotted decimal notation.

To make the IPv4 address more compact and easier to read, Internet addresses are usually written in decimal form with a decimal point (dot) separating the bytes. The following is the dotted-decimal notation of the above address:

We replace each group of 8 bits with its equivalent decimal number and add dots for separation.

We replace each decimal number with its binary equivalent.

Find the error, if any, in the following IPv4 addresses.

b)There can be no more than four numbers in an IPv4 address.

d)A mixture of binary notation and dotted-decimal notation is not allowed.

Find the class of each address.

a)The first bit is O. This is a class A address.

One problem with classful addressing is that each class is divided into a fixed number of blocks with each block having a fixed size as shown in Table 3.1.

In classful addressing, an IP address in class A, B, or C is divided into netid and hostid.

Although  the  length  of  the  netid  and  hostid  (in  bits)  is  predetermined  in  classful addressing, we can also use a mask (also called the default mask), a 32-bit number made of contiguous Is followed by contiguous as. The masks for classes A, B, and C are shown in Table 3.2. The concept does not apply to classes D and E

The mask can help us to find the netid and the hostid. For example, the mask for a class A address has eight 1s, which means the first 8 bits of any address in class A define the netid; the next 24 bits define the hostid. The last column of Table 3.2 shows the mask in the form /n where n can be 8, 16, or 24 in classful addressing. This notation is also called slash notation orClassless Interdomain Routing (CIDR) notation. The notation is used in classless addressing,

If an organization was granted a large block in class A or B, it could divide the addresses

into several contiguous groups and assign each group to smaller networks (called subnets). Subnetting increases the number of Is in the mask.

The flaws in classful addressing scheme combined with the fast growth of the Internet led to the near depletion of the available addresses. Yet the number of devices on the Internet is much less than the 232 address space. We have run out of class A and B addresses, and a class C block is too small for most midsize organizations. One solution that has alleviated the problem is the idea of classless addressing.

To overcome address depletion and give more organizations access to the Internet, classless addressing was designed and implemented. In this scheme, there are no classes, but the addresses are still granted in blocks.

1. The addresses in a block must be contiguous, one after another.

3. The first address must be evenly divisible by the number of addresses.

Figure 3.3 shows a block of addresses, in both binary and dotted-decimal notation, granted to a small business that needs 16 addresses.

A better way to define a block of addresses is to select any address in the block and the mask. As we discussed before, a mask is a 32-bit number in which the n leftmost bits are 1s and the 32 - n rightmost bits are 0s. However, in classless addressing the mask for a block can take any value from 0 to 32. It is very convenient to give just the value of n preceded by a slash.

A block of addresses is granted to a small organization. We know that one of the addresses is 205.16.37.39/28. What is the first address in the block?

Find the last address for the block in Example 3.6.

Number of Addresses: The number of addresses in the block is the difference between the lastand first address. It can easily be found using the formula 232- n.

Find the number of addresses in Example 3.6.

a. The first address

b. The last address

c. The number of addresses

a. The first address can be found by ANDing the given addresses with the mask. ANDing here is done bit by bit. The result of ANDing 2 bits is 1 if both bits are Is; the result is 0 otherwise.

b. The last address can be found by ORing the given addresses with the complement of the mask. ORing here is done bit by bit. The result of ORing 2 bits is 0 if both bits are 0s; the result is 1 otherwise. The complement of a number is found by changing each 1 to 0 and each 0 to 1.

c. The number of addresses can be found by complementing the mask, interpreting it as a decimal number, and adding 1 to it.

A very important concept in IP addressing is the network address. When an organization

An IP address can define only two levels of hierarchy when not subnetted. The n leftmost bits of the address x.y.z.tJn define the network (organization network); the 32 – n rightmost bits define the particular host (computer or router) to the network. The two common terms are prefix and suffix. The part of the address that defines the network is called the prefix; the part that defines the host is called the suffix. Figure 3.6 shows the hierarchical structure of an IPv4 address.

The prefix is common to all addresses in the network; the suffix changes from one device to another. Each address in the block can be considered as a two-level hierarchical structure: the leftmost n bits (prefix) define the network; the rightmost 32 - n bits define the host.

Note that applying the mask of the network, /26 to any of the addresses gives us the network address 17.12.14.0/26. We leave this proof to the reader. We can say that through subnetting, we have three levels of hierarchy. Note that in our example, the subnet prefix length can differ for the subnets as shown in Figure 3.8.

regional ISP into smaller blocks and assign each one to a different organization. Finally, an organization can divide the received block and make several subnets out of it.

The next issue in classless addressing is address allocation. The ultimate responsibility of address allocation is given to a global authority called the Internet Corporation for Assigned Names and Addresses (ICANN). However, ICANN does not normally allocate addresses to individual organizations. It assigns a large block of addresses to an ISP. Each ISP, in turn, divides its assigned block into smaller subblocks and grants the subblocks to its customers. In other words, an ISP receives one large block to be distributed to its Internet users. This is called address aggregation: many blocks of addresses are aggregated in one block and granted to one ISP.

An ISP is granted a block of addresses starting with 190.100.0.0/16 (65,536 addresses). The ISP needs to distribute these addresses to three groups of customers as follows:

Design the subblocks and find out how many addresses are still available after these allocations. 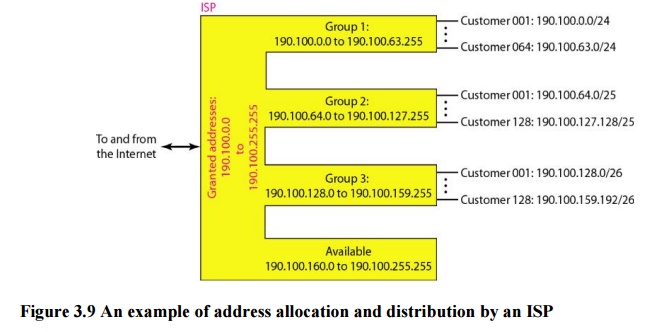 Number of allocated addresses by the ISP: 40,960