Unicast, Multicast, and Broadcast: A message can be unicast, multicast, or broadcast.

A message can be unicast, multicast, or broadcast.

A multicast packet starts from the source S1 and goes to all destinations that belong to group G1. In multicasting, when a router receives a packet, it may forward it through several of its interfaces. 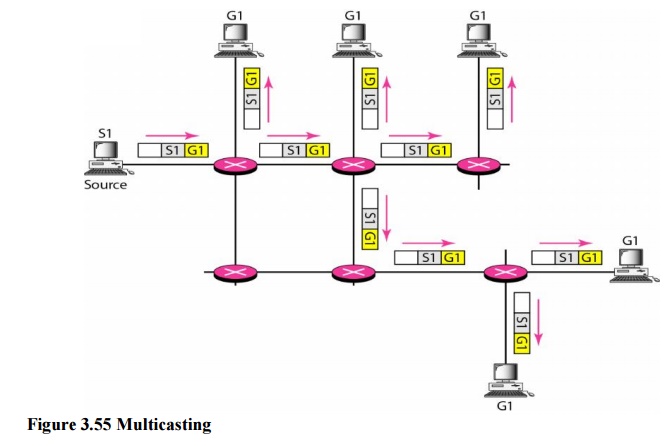 In broadcast communication, the relationship between the source and the destination is one-to-all. There is only one source, but all the other hosts are the destinations. The Internet does not explicitly support broadcasting because of the huge amount of traffic it would create and because of the bandwidth it would need. Imagine the traffic generated in the Internet if one person wanted to send a message to everyone else connected to the Internet.

Multicasting starts with one single packet from the source that is duplicated by the routers. The destination address in each packet is the same for all duplicates. Note that only one single copy of the packet travels between any two routers.

In multiple unicasting, several packets start from the source. If there are five destinations, for example, the source sends five packets, each with a different unicast destination address. Note that there may be multiple copies traveling between two routers. 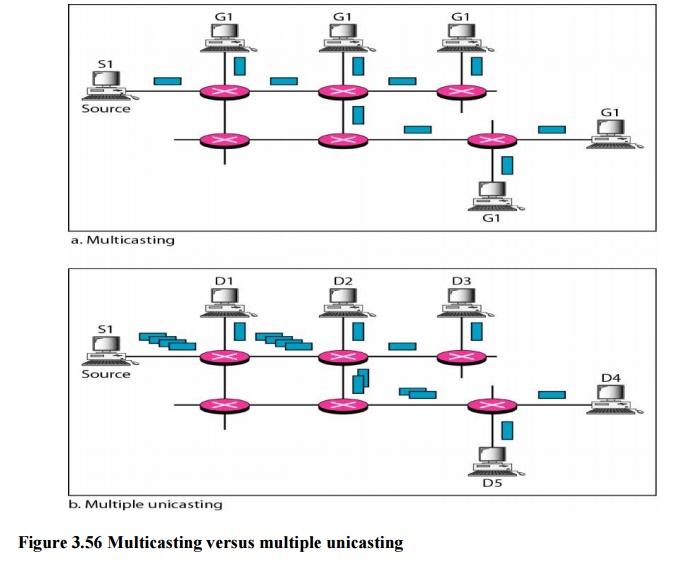 Multicasting has many applications today such as access to distributed databases, information dissemination, teleconferencing, and distance learning.

Businesses often need to send information to their customers. If the nature of the information is the same for each customer, it can be multicast. In this way a business can send one message that can reach many customers. For example, a software update can be sent to all purchasers of a particular software package.

The process of optimal interdomain routing eventually results in the finding of the shortest path tree. The root of the tree is the source, and the leaves are the potential destinations. The path from the root to each destination is the shortest path. However, the number of trees and the formation of the trees in unicast and multicast routing are different. 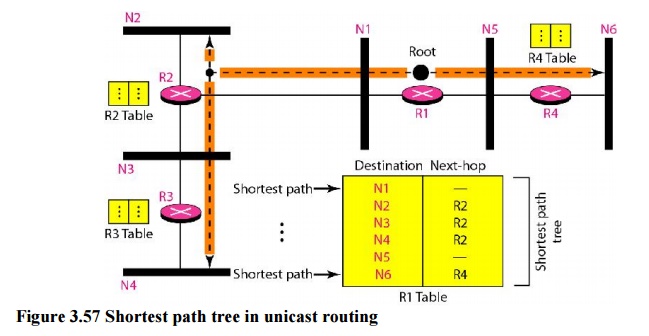 Multicast Routing: When a router receives a multicast packet, the situation is different fromwhen it receives a unicast packet. A multicast packet may have destinations in more than one network. Forwarding of a single packet to members of a group requires a shortest path tree. If we have n groups, we may need n shortest path trees. We can imagine the complexity of multicast routing. Two approaches have been used to solve the problem: source-based trees and group-shared trees.

a. Source-Based Tree: In the source-based tree approach, each router needs to have one shortestpath tree for each group. The shortest path tree for a group defines the next hop for each network that has loyal member(s) for that group. Five groups in the domain: GI, G2, G3, G4, and G5.

b. Group-Shared Tree:. In the group-shared tree approach, instead of each router havingmshortest path trees, only one designated router, called the center core, or rendezvous router, takes the responsibility of distributing multicast traffic. The core has m shortest path trees in its routing table. The rest of the routers in the domain have none. If a router receives a multicast packet, it encapsulates the packet in a unicast packet and sends it to the core router. The core router removes the multicast packet from its capsule, and consults its routing table to route the packet.

Multicast link state routing uses the source-based tree approach. links. For multicast routing, a node needs to revise the interpretation of state. A node advertises every group which has any loyal member on the link. Here the meaning of state is "what groups are active on this link." The information about the group comes from IGMP. Each router running IGMP solicits the hosts on the link to find out the membership status.

MOSPF Multicast Open Shortest Path First (MOSPF) protocol is an extension of theOSPF protocol that uses multicast link state routing to create source-based trees. The protocol requires a new link state update packet to associate the unicast address of a host with the group address or addresses the host is sponsoring. This packet is called the group-membership LSA.

Multicast distance vector routing uses source-based trees, but the router never actually makes a routing table. When a router receives a multicast packet, it forwards the packet as though it is consulting a routing table.

DVMRP The Distance Vector Multicast Routing Protocol (DVMRP) is animplementation of multicast distance vector routing. It is a source-based routing protocol, based on RIP.

The Core-Based Tree (CBT) protocol is a group-shared protocol that uses a core as the root of the tree. The autonomous system is divided into regions, and a core (center router or rendezvous router) is chosen for each region.

The Core-Based Tree (CBT) is a group-shared tree, center-based protocol using one tree per group. One of the routers in the tree is called the core. A packet is sent from the source to members of the group following this procedure:

a)        The source, which may or may not be part of the tree, encapsulates the multicast packet inside a unicast packet with the unicast destination address of the core and sends it to the core. This part of delivery is done using a unicast address; the only recipient is the core router.

b)       The core decapsulates the unicast packet and forwards it to all interested intetfaces.

c)        Each router that receives the multicast packet, in tum, forwards it to all interested interfaces.

PIM-DM is used when there is a possibility that each router is involved in multicasting (dense mode). In this environment, the use of a protocol that broadcasts the packet is justified because almost all routers are involved in the process. PIM-DM is a source-based tree routing protocol that uses RPF and pruning and grafting strategies for multicasting. Its operation is like that of DVMRP.

PIM-SM is used when there is a slight possibility that each router is involved in multicasting (sparse mode). In this environment, the use of a protocol that broadcasts the packet is not justified; a protocol such as CBT that uses a group-shared tree is more appropriate. PIM-SM is used in a sparse multicast environment such as a WAN. PIM-SM is a group-shared tree routing protocol that has a rendezvous point (RP) as the source of the tree.