A routing table can be either static or dynamic. A static table is one with manual entries.

A router receives a packet from a network and passes it to another network. A router is usually attached to several networks. One approach is to assign a cost for passing through a network. We call this cost a metric. However, the metric assigned to each network depends on the type of protocol. Some simple protocols, such as the Routing Information Protocol (RIP), treat all networks as equals. The cost of passing through a network is the same; it is one hop

count. So if a packet passes through 10 networks to reach the destination, the total cost is 10 hop counts. 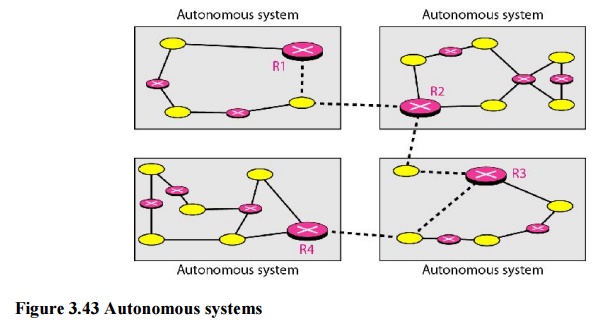 Several intradomain and interdomain routing protocols are in use.

In distance vector routing, the least-cost route between any two nodes is the route with minimum distance. In this protocol, as the name implies, each node maintains a vector (table) of minimum distances to every node. The table at each node also guides the packets to the desired node by showing the next stop in the route (next-hop routing).

The table for node A shows how we can reach any node from this node. For example, our least cost to reach node E is 6. The route passes through C.

The tables in Figure 3.45 are stable; each node knows how to reach any other node and the cost. At the beginning, however, this is not the case. Each node can know only the distance between itself and its immediate neighbors, those directly connected to it. So for the moment, we assume that each node can send a message to the immediate neighbors and find the distance between itself and these neighbors. The distance for any entry that is not a neighbor is marked as infinite (unreachable).

When a node receives a two-column table from a neighbor, it needs to update its routing table. Updating takes three steps:

3. The receiving node needs to compare each row of its old table with the corresponding row of the modified version of the received table.

a)        If the next-node entry is different, the receiving node chooses the row with the smaller cost. If there is a tie, the old one is kept.

b)       If the next-node entry is the same, the receiving node chooses the new row. For example, suppose node C has previously advertised a route to node X with distance 3.

A problem with distance vector routing is instability, which means that a network using this protocol can become unstable. To understand the problem, let us look at the scenario depicted.

Defining Infinity The first obvious solution is to redefine infinity to a smaller number, such as100. For our previous scenario, the system will be stable in less than 20 update s. As a matter of fact, most implementations of the distance vector protocol define the distance between each node to be I and define 16 as infinity. However, this means that the distance vector routing cannot be used in large systems. The size of the network, in each direction, cannot exceed 15 hops.

Split Horizon Another solution is called split horizon. In this strategy, instead of flooding thetable through each interface, each node sends only part of its table through each interface. If, according to its table, node B thinks that the optimum route to reach X is via A, it does not need to advertise this piece of information to A; the information has corne from A (A already knows). Taking information from node A, modifying it, and sending it back to node A creates the confusion. In our scenario, node B eliminates the last line of its routing table before it sends it to A. In this case, node A keeps the value of infinity as the distance to X.

The figure shows a simple domain with five nodes. Each node uses the same topology to create a routing table, but the routing table for each node is unique because the calculations are based on different interpretations of the topology. This is analogous to a city map. While each person may have the same map, each needs to take a different route to reach her specific destination

In link state routing, four sets of actions are required to ensure that each node has therouting table showing the least-cost node to every other node.

a) Creation of the states of the links by each node, called the link state packet (LSP).

b)Dissemination of LSPs to every other router, called flooding, in an efficient and  reliable way.

c) Formation of a shortest path tree for each node.

d)Calculation of a routing table based on the shortest path tree.

In OSPF terminology, a connection is called a link. Four types of links have been defined: point-to-point, transient, stub, and virtual.

A point-to-point link connects two routers without any other host or router in between. In other words, the purpose of the link (network) is just to connect the two routers. An example of this type of link is two routers connected by a telephone line or a T line. There is no need to assign a network address to this type of link. Graphically, the routers are represented by nodes, and the link is represented by a bidirectional edge connecting the nodes. The metrics, which are usually the same, are shown at the two ends, one for each direction. In other words, each router has only one neighbor at the other side of the link.

Distance vector and link state routing are both intradomain routing protocols. They can be used inside an autonomous system, but not between autonomous systems. These two protocols are not suitable for interdomain routing mostly because of scalability. Both of these routing protocols become intractable when the domain of operation becomes large. Distance vector routing is subject to instability if there are more than a few hops in the domain of operation. Link state routing needs a huge amount of resources to calculate routing tables. It also creates heavy traffic because of flooding. There is a need for a third routing protocol which we call path vector routing.

At the beginning, each speaker node can know only the reach ability of nodes inside its autonomous system 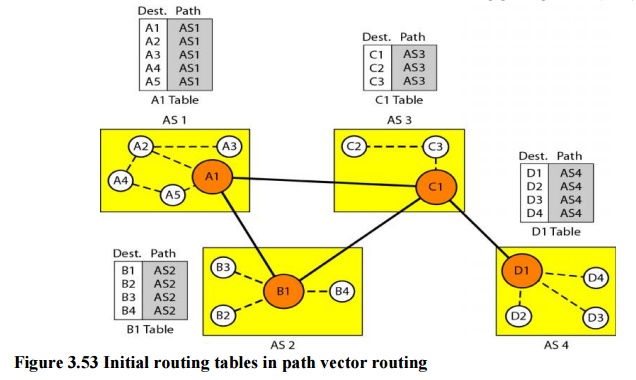