The life cycle of bees: From the zygote stage up to attaining the adultreproductive active stage, the stages that are passed are known as the life cycle of a bee. There are four stages e.g. ( a) egg (b) larva (c) pupa and (d) adult.

The life cycle of bees: From the zygote stage up to attaining the adultreproductive active stage, the stages that are passed are known as the life cycle of a bee. There are four stages e.g. ( a) egg (b) larva (c) pupa and (d) adult.

Egg: The queen and the king meet in the air in flying condition then when thequeen collect sperms from the king and return to the comb, the king dies. The queen lays eggs in fixed egg chamber and one egg is laid in each chamber. The eggs are very small in size and some are fertilized and some are unfertilized. In the chamber the eggs are developed into larvae.

Larvae: They are small and white in colour. During this time the workers feed"Royal Jelly" to the larvae of the male and queen chamber. Royal Jelly is a very nutritious food. On the other hand, the larvae of the general chambers are fed half digested "Bee Bread" made of pollen grains and honey. The opening of the chambers is covered by wax within a few days. Within it the larvae develop into pupae. The larval stage lasts up to 4-7 days. 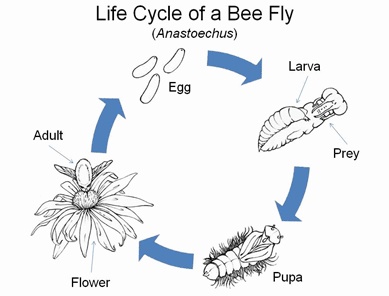 Pupae: A covering is formed all around the pupa, within which the pupa isdeveloped into an adult bee, which. comes out of the chamber by cutting the cover (closed by wax). Male or king bees from unfertilized egg, and queen and numerous worker bees come from fertilized eggs: From the egg stage up to the adult, 24 days is needed for the king and 15 days for the queen.

New queen: In a comb one or more than one queen bees are born. On the lowerpart of the comb, the finger like elongated chamber contains fertilized eggs. which give birth to future the queen, which grows very quickly due to feeding of nutritious liquid royal jelly by the workers during the larval stage. The queen, by coming out of the chamber, flies about in the air for meeting the king. By this time, the sperms from the king is collected and stored in the sperm sac within the body of the queen. After that the queen according to her wishes whether she fertilizes her egg or not. Generally the old queen kills the pupae of the future new queen by stinging. Sometimes when the comb becomes very big or due to some reason, when a new comb is to be produced, the old queen leaves the old comb with some workers in swarms and produce new comb. This swarms of workers consists of about 25;000-30,000 bees. On the other hand in old combs, new queen and new and old workers and the king continues to live. In this way, thousands of new combs are produced in a natural way. Generally each comb contains more than 55,000 bees.

Honey: The thick, dense, gummy. sweet. heavy liquid which is available in thecomb is known as honey. The worker bees collect nectar; a kind of juice from the flowers, the water of which is eliminated in the stomach of the bees and then it becomes honey.

Wax: The white, solid substance which is utilized in the construction of thehoney comb is called wax. The wax is produced by the substances secreted from the wax gland present in the worker bee.