The bee is a social insect belonging to the class Insecta and phylum Arthropoda. It does a great help to human being by producing wax and honey and pollinating the plants.

The bee is a social insect belonging to the class Insecta and phylum Arthropoda. It does a great help to human being by producing wax and honey and pollinating the plants. The bees, in groups collect honey from flower to flower and store in their comb. Men collect these honeys and wax from the honeycomb and use it .in different ways. But it is dangerous to collect honey and wax from the comb 'as the bees are capable to attack by stings located in their abdomen.

In a hive or in the residence of bees these are three kinds ofbees having different structure and function.

These three kinds of bees live together in the hive and do their own work independently:

a) Queen bee: The queen is larger than the other bees. Laying eggs is the onlyfunction of the queen and she lays about 1500 eggs per day. Their life span is of three years. Each hive contains only one active queen bee. If any new queen is born in the hive, the old queen kills her by stinging.

b) Male or king bees: In a hive there may be a few male bees which take partin reproduction only. They are sting less and they do not collect honey.

c) Worker bees: As a matter of fact, they are female bees but they are sterileand do not lay eggs. Their function is to collect honey, to look after the king, queen and larvae and to defend the hive from the enemies by stinging, to do overall supervision of the combs. They clean the chambers of the comb and produce new chambers by secreting wax from the body. Adult workers collect honey, pollen grains from the flowers to flowers and store in the comb. The workers pollinate flowers indirectly when they roam about at the time of collecting honey and pollen grains. Due to pollination by bees, it is possible to produce many crops. and the production of many crops increases by 20-25%.

The life cycle of bees:

From the zygote stage up to attaining the adultreproductive active stage, the stages that are passed are known as the life cycle of a bee. There are four stages e.g. ( a) egg (b) larva (c) pupa and (d) adult.

Egg: The queen and the king meet in the air in flying condition then when thequeen collect sperms from the king and return to the comb, the king dies. The queen lays eggs in fixed egg chamber and one egg is laid in each chamber. The eggs are very small in size and some are fertilized and some are unfertilized. In the chamber the eggs are developed into larvae.

Larvae: They are small and white in colour. During this time the workers feed"Royal Jelly" to the larvae of the male and queen chamber. Royal Jelly is a very nutritious food. On the other hand, the larvae of the general chambers are fed half digested "Bee Bread" made of pollen grains and honey. The opening of the chambers is covered by wax within a few days. Within it the larvae develop into pupae. The larval stage lasts up to 4-7 days.

Pupae: A covering is formed all around the pupa, within which the pupa isdeveloped into an adult bee, which. comes out of the chamber by cutting the cover (closed by wax). Male or king bees from unfertilized egg, and queen and numerous worker bees come from fertilized eggs: From the egg stage up to the adult, 24 days is needed for the king and 15 days for the queen.

New queen: In a comb one or more than one queen bees are born. On the lowerpart of the comb, the finger like elongated chamber contains fertilized eggs. which give birth to future the queen, which grows very quickly due to feeding of nutritious liquid royal jelly by the workers during the larval stage. The queen, by coming out of the chamber, flies about in the air for meeting the king. By this time, the sperms from the king is collected and stored in the sperm sac within the body of the queen. After that the queen according to her wishes whether she fertilizes her egg or not. Generally the old queen kills the pupae of the future new queen by stinging. Sometimes when the comb becomes very big or due to some reason, when a new comb is to be produced, the old queen leaves the old comb with some workers in swarms and produce new comb. This swarms of workers consists of about 25;000-30,000 bees. On the other hand in old combs, new queen and new and old workers and the king continues to live. In this way, thousands of new combs are produced in a natural way. Generally each comb contains more than 55,000 bees.

Honey: The thick, dense, gummy. sweet. heavy liquid which is available in thecomb is known as honey. The worker bees collect nectar; a kind of juice from the flowers, the water of which is eliminated in the stomach of the bees and then it becomes honey.

Wax: The white, solid substance which is utilized in the construction of thehoney comb is called wax. The wax is produced by the substances secreted from the wax gland present in the worker bee.

The economic importance of bees:

d)      Maintains the balance of environment

a)        It is used from ancient times as nutritious, blood increasilljg and strength giving food

b)      In industries and in making furniture wax is used

c)        In research laboratory and handicraft, wax is used.

d)  Many people earn their livelihood by being connected with apiculture, wax and honey business.

e)   Foreign exchange may be earned by exporting honey and wax.

f)     The housewives may bring financial solvency in domestic life by artificial bee culture in the house with less labour.

The method of artificial bee culture and collection of honey:

Through ancient method, honey was collected from the combs in forests. In this method smokes drive out the bees from the comb, and honey and wax are collected. In this way the honey collectors collect wax and honey from the Sundarbans. But the number of naturally made honeycomb is decreasing gradually. This is why the bees are cultured artificially nowaday. Like many countries in the world, bee culture is being practiced in our country as well. By this method, scientifically the wax and honey are procured very easily.

The artificial method of bee culture:

A sort of simple comb box is discovered for bee culture in Bangladesh. The upper surface of this comb box is opened and within it long sticks are hung. There is an arrangement for covering the upper portion, so that the rainwater may not enter into it in the rainy season. The comb box is kept within the house or in the mustard field above the ground level. At times of box placement some honey is scattered within the box, the smell of which attracts the bees that enters the box through some fixed aperture and due to natural and inborn tendency the bees start to produce comb and collect honey. In this way artificially, bee culture is practiced. If the comb is kept near the naturally made honeycomb, the newly born bees easily form the nest (comb) there. 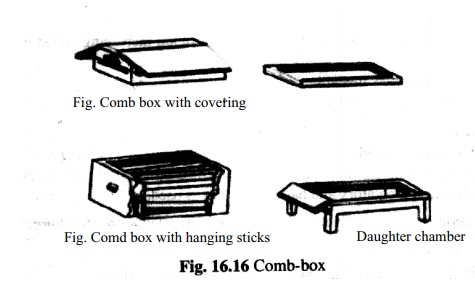 Honey collection: In ancient method the honey filled honeycomb is smoked,and the honey and wax is collected. At present with the help of special type of instrument honey is extracted. In this way the artificial comb is not damaged and therefore it can be used more than once.