Culture of silk worms or sericulture

What is silk: The silk clothes that we use are made of fibers or silk threadsproduced from the secretion of saUvary glands of silk moth.

Culture of silk worms or sericulture

What is silk: The silk clothes that we use are made of fibers or silk threadsproduced from the secretion of saUvary glands of silk moth. The silk worm is included in the phylum-Arthropoda, class-Insecta and order-Lepidortera. The juice secreted by the salivary gland of silk worm, coming in contact with the air form the silk fibers which are very fine long, elastic and bright. Silk clothes are regarded as most beautiful and valuable clothes in the world. Different species of silk moth produces silk of different qualities. They ore as follows:

(a) Mulberry silkworm: Produce silk of the highest quality.

(c) Tasar silkworm: Produce a type of silk known as Tasar. Of all these silk fibers, silk produced by the mulberry silk worms is of the best quality.

History of sericulture : Silk was discovered in China about 2000 years beforethe birth of jesus Christ. From that time the Chinese had the monopoly to produce silk and silken clothes secretly. Two European monks about 500 years after the birth of Christ learned the technique of producing silk and sent some eggs of silk worms to Europe. It is from that time that the silk cultivation started in Europe. At present, countries like Japan, China, -Italy, Russia, India Brazil etc produce silk and silk clothes of the highest standard and earn a larg amount of foreign currency by exporting those. In Bangladesh too, silkworm of different species are reared. In Mymansingh, Tangail, Rajshahi, Rangpur Dinajpur and Bogra silkworm is cultivated. The climate and soil of Rajshahi is favourable for producing mulberry plants and so the mulberry silk worm is widely cultivated there.

Characteristics of silk fibers and economic importance of silk worms

i.               As the silk fibers can retain some moisture, the clothes made of silk can be used in both the winter and summer seasons.

ii.               The silk is non-conductor of electricity, and therefore can be used as an insulator covering of electric wires.

v.               The silken clothes manufactured in Bangladesh play a vital role in solving problems of clothing.

vi.               Many people are employed in silk producing factories and mills and the problem of unemployment is solved to some extent.

vii.               The housewives can earn money in the house in return of less labour and less capital through the culture of silk worm.

viii.               The oil secreted from the body of pupae and their remains are useful as poultry feed. The dead pupae are also used as manure.

Method of silk culture: What is sericulture? With the aim of producing silkfiber and manufacturing silken clothes the overall process of rearing of the silk worm scientifically and to collect silk fibers from their cocoon is known as sericulture. Commercially its cultivation is very profitable.

The life cycle of mulberry silk worms: The life of an animal from zygote tosexually mature adult stage through gradual development is known as its life cycle. The stages of life cycle of animal rotate in a cycle. In the life history of all the species of silkworm in general, there are four stages which rotate in cycles e.g. ( a) egg (b) larva (c) pupa and (d) adult

1. Egg collection: The male and female silk moths mate soon after emergingfrom the pupal case. The egg is fertilized in the body of the female and the zygote is formed. Immediately after that the male worm dies and the female worm starts to lay eggs. The female worm is allowed to lay eggs, for the purpose with a piece of paper spread in a basket. The eggs become attached on the paper of the basket with the help of a kind of sticky secretion secreted from the body of the female moth. A single female may lay 300 - 500 eggs at a time. The eggs look like mustard grains or small beads, yellowish in colour. The larva or polo hatches out from the eggs within 8 - 10 days in summer and it may take a little more time if the temperature is less.

2. Larva: The larva is narrow, small and brownish in colour. On the head thereis a pair of small sensory appendage and on the thoracic region there are three pairs of segmented legs with claws. The claws are used to hold the mulberry leaves at the time of eating. There are five pairs of un-segmented pralegs on the abdomen of the larva. They help in locomotion. The larval stage is the active stage which lasts 20-25 days in summer. The larvae are supplied with pieces of tender leaves of mulberry and they grow larger gradually. They shed their cuticle four times. The adult larva grows about 60mm long and if more mulberry leaves are supplied to them the body growth becomes more satisfactory. From large larvae large cocoons are produced which yield better type of silk. At the end of the larval stage the pupal stage starts. 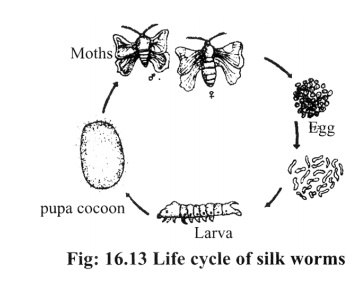 3. Pupa : At the end of larval stage the silkworm stops eating leaves and their body shrinks. When the larva forms cocoons round the body by winding the head within the cocoons, they stay and form the pupae, from the juice secreted by the salivary glands of which the fibers come out. The fibers come in contact with the air and harden to form egg shaped cocoons which takes 3 - 4 days. The pupa then is transformed into adult moths. At this stage they do not eat anything and remain inactive. After 8 - 10 days the pupal stage is over and the moths come out by cutting one end of the cocoon.

4. Adult Moth: The adult moth has a pair of long plumose Antenna on thehead. They have three pairs of legs in the thorax and two pairs of wings on the dorsal side, but the moth cannot fly well. The male moth survives generally one day and female 3-4 days. After laying eggs the female moth dies. From the seed store of Bangladesh Sericulture Development Board improved quality silk cocoons are available and high quality disease free and healthy seeds can be collected if required.

Disease of silkworm and treatment: T.he larvae of silkworms may beattacked by some diseases. These diseases are caused by the attack of various kinds of parasites like virus, bacteria, fungi etc. Pebrin is caused by a type of protozoa. Due to attack of this disease small black spots appear on the body of the larvae which die due to ill nutrition.

1.       To control this disease, the attacked larvae should be removed.

2.        In suitable germ killing solution the eggs should be kept for few minutes and then in pure water.

A short ,description of the process of collecting silk: This process is completed in a few steps:

i.               After the formation of cocoons, they are to be kept at a certain temperature This will kill the pupae. Otherwise the pupae would come out within a few days by cutting the cocoon and thereby destroy the continuity of the fibers.

The  present  condition  of  silk  cultivation  and  its  possible  prospects  in Bangladesh:

Silk Development Board has been established in Bangladesh in 1978. This board takes the responsibility of  ( a) mulberry plant cultivation, (b) cocoon  production and (e) the weaving of clothes. 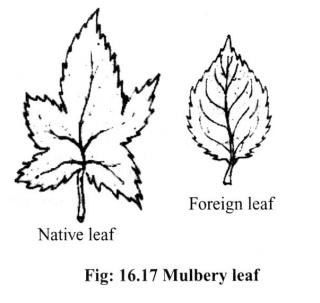