The Regulating Act of 1773 imposed on the court of Directors the legal obligation of informing all revenue transactions of the Company servants to the British Treasury.

The Regulating Act of 1773 imposed on the court of Directors the legal obligation of informing all revenue transactions of the Company servants to the British Treasury. 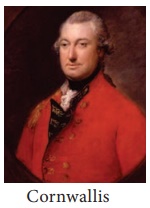 The Governor and Council consisting of the Commander-in-Chief and two counsellors sat as a Board of Revenue which discussed revenue matters. The Pitt India Act of 1784 separated the civil and military establishments in India.

Governor-General Cornwallis, himself a big landlord, wanted to create landlords after the British model in India. Cornwallis came to a settlement with the revenue farmers. This resulted in the creation of a new type of middlemen, called zamindars, reducing the cultivators to the position of mere tenants. This settlement that Cornwallis made with the zamindars of Bengal, Bihar and Orissa in 1793, in pursuance of the instruction from the Directors, is called the Permanent Settlement. ‘Settlement’ refers to the assessment and fixing of the quantum of land revenue to be paid by each zamindar to the government. For Bengal, Bihar and Orissa, this was fixed permanently. Thus the zamindars who were originally tax collectors acquired hereditary rights over the land assigned by the government. The zamindars pocketed whatever they collected over and above the settlement.

The first quarter of the nineteenth century was a formative period in the land revenue history of the Madras Province. First after a great deal of deliberations Permanent Settlement was adopted. The districts of Chengalpattu, Salem and Dindigul were divided into a number of mittahs and sold to the highest bidders. Most of the purchasers, after fleecing the peasants, failed in the course of a year or two. The experiment was therefore abandoned. Then the Board of Revenue tried a system of village leases.

Mahalwari was introduced in 1833 during the period of William Bentinck. Under the system the revenue settlement was made with the proprietor of the estate but the land revenue was collected from individual cultivators

Under the Village Lease system the assessment of each village was to be fixed for a period of three years based on the actual collections over a series of past years. In districts where mirasi rights existed, the mirasdar was made responsible for the rent collections. In districts where the mirasi rights did not exist, an arrangement was made with the village headman. This system failed due to various reasons such as bad monsoons, low price of grains and the short period of lease. When crops failed entire villages defaulted and fled without paying the revenue. The government had to seek the help of the district collectors to bring back the peasants to the village.

By 1814 the Court of Directors had decided to introduce the ryotwari system. This was a system formulated by Governor Thomas Munro. Under this system the ryot, an Anglicization by the British in India of the Arabic word ra'īyah, meaning a peasant or cultivator, was the proprietor and tax payer of the land. The government dealt with him directly without the intervention of any middlemen. The peasant was entitled to possession of land so long as he paid the land revenue. Apart from eviction, default could result in attachment of livestock, household property and personal belongings. The government assessed the revenue of each cultivated field. The revenue assessment was reviewed once in thirty years, taking into account the changes in grain prices, marketing opportunities, irrigation facilities and the like. The ryotwari system introduced the concept of private property in land. The individual holders were registered and issued pattas. They were permitted to sell, lease, mortgage or transfer the right over land.

Thomas Munro: Munro arrived Madras in 1780. In the first 12 years he was engaged in Mysore War as soldier. He worked in the

Baramahal (Salem district) from 1792- 1799 and Kanara from 1799-1800. He was collector of Ceded Districts: Kadapa, Kurnool, Chittoor, Anantapur. It was during this period that he conceived the idea of Ryotwari Settlement. In 1820 he became Governor of Madras Presidency and served for seven years. In 1822 he officially enforced the Ryotwari System in Madras. During his governorship, he gave attention to education and regarded any expenditure on it as an investment. He also emphasized the need for Indianization of the services. He died of Cholera at Pattikonda (Karnool district) in July 1827. A very popular governor, people constructed shrines in his honour, and named their children after him. His statue was erected at Madras in 1839 by public subscription.