Efforts at Safety and Developmental Measures

Pindaris were freebooters composed of both Muslim and Hindu bands.

Efforts at Safety and Developmental Measures

Pindaris were freebooters composed of both Muslim and Hindu bands. The Subsidiary Alliance of the Company had led to the disbandment of thousands of soldiers and most of them joined them and swelled their numbers in central India. The British proclaimed Pindari War. But it turned out to be a war against Marathas and the outcome of this prolonged war (1811 to 1818) was that the whole of Central India came under British rule. 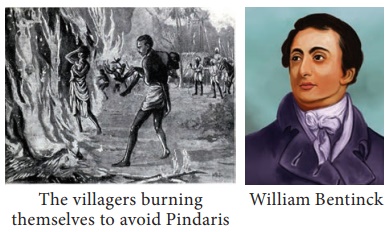 The Thugs were robbers operating between Delhi and Agra from the fourteenth century. They were bound together by oaths and ritual and murdered unsuspecting travellers in the name of the goddess Kali. Bentinck placed William Sleeman in charge of the operation to eliminate the Thuggee menace. Between 1831 and 1837 more than three thousand Thugs were convicted. Five hundred became approvers. By 1860 the problem of thuggee had ceased to exist. 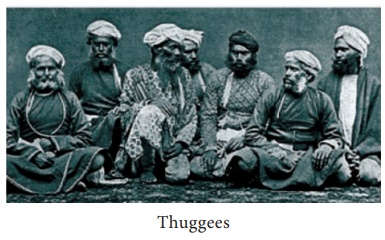 Bentinck showed great courage and humanity by his decision to abolish sati, the practice of burning widows alive with the corpses of their husbands. Previous governors-general were reluctant to prohibit the custom as an interference in religion but Bentinck enacted a law (Sati Abolition Act, 1829) to put an end to this practice. Raja Rammohan Roy’s campaigns and efforts played a decisive part in getting this inhuman practice abolished.

The first serious proposal for constructing railways was made by the European business community. The Directors were doubtful whether railways could be successfully built in India. Governor General Dalhousie however persuaded them arguing that the railways would bring very considerable economic advantage. Yet before the Great Rebellion less than three hundred miles of track had been laid.

Though several proposals for the laying of telegraph communication between India and London were put forward, the telegraph service was inaugurated only in 1854. During the Great Rebellion of 1857 its importance was realised. In the aftermath of 1857, it became an urgent necessity. The time of communication between London and Calcutta came down from several days to twenty eight minutes. With the opening of Suez Canal in 1869, the journey between Europe and India was reduced by some 4000 miles. By1870 the government of British India was in effective contact with Secretary of State, India Office, London. Subsequently, with the exception of Curzon, Governor Generals were reluctant to do anything without seeking the permission of Whitehall, the headquarters of the East India Company.

The railway line from Bombay to Thane was opened in 1853; from Howrah to Raniganj in 1854-55. The first railway line in south India ran from Madras to Arakonam in 1856. Royapuram was one of the railway stations inaugurated in that year. 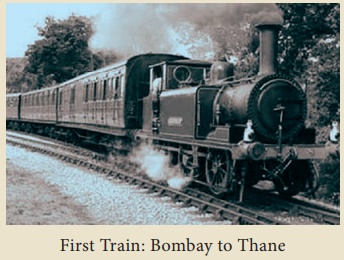 The British neglected irrigation. The irrigation channels and tanks built by Indian rulers fell into disuse and there was little effort on the part of the Company to undertake repairs or renovation works. In Madras, as we will see in the following section, a few irrigation works were carried out because of the personal enthusiasm of Arthur Cotton, an Engineering officer. Against much opposition, Cotton built a dam across the Kollidam (Coleroon) in 1836. In 1853, a dam across the Krishna river had also begun. In the north, before the takeover of India by the Crown, Jumna canal was completed in 1830 and by 1857 the Ganges canal had been extended to nearly 450 miles.

In the Punjab area the Bari Doab canal had been excavated by 1856. But the canal water contributed to soil salinity and water logging causing great ecological distress.

Land revenue was the mainstay of the British Indian government’s fiscal system. Therefore, in their effort to extend the areas of cultivable land, forests were destroyed. Zamins were created out of Jungle Mahal forests and auctioned off for regular cultivation. The original inhabitants of this region, the Santhals were evicted. Therefore it was the Santhals who were the first tribal group to resist the British rule in India. Slope cultivation was encouraged in the hilly and mountainous tracts. Land was provided to European enterprises at a throwaway price for slope cultivation. Further, in their enthusiasm to try plantation crops, zamindars and Indian rulers destroyed the forests. Coffee, for instance, did not grow in many places. Yet in the process of attempting coffee cultivation large tracts of virgin forests were destroyed. Timber came to be exploited with the massive construction of the railway system. In the 1870s, it was calculated that every year one million sleepers were needed to build railway tracks. Indian trees, particularly sal, deodar, and teak, were preferred for their strength over other Indian timbers. These three species were intensively exploited. Much sal was extracted from the forests of the Jungle Mahals of West Bengal and Bihar.

Timber went to England too for the building of railways. The myth that India’s forests were inexhaustible was exploded. It was in this background that the colonial state, in order to manage and control forest resources, started the Forest Department and passed the Indian Forest Act, 1865. This was a draconian act which restricted the use of forest resources by indigenous groups who resented it. In order to contain protest and resistance the British enacted the dreaded Criminal Tribes Act, 1871. During the entire colonial period there were frequent insurrections by tribal people against the colonial state. The legacy of the colonial forest acts continues to haunt contemporary times as well.