Famine, though no stranger to India, increased in frequency and deadliness with the advent of British colonial rule.

Famine, though no stranger to India, increased in frequency and deadliness with the advent of British colonial rule. Between 1800 and 1825, there were only four famines. But in the last quarter of the century there were 22 famines. It is estimated that over five million died. By 1901, Romesh Chunder Dutt, a former ICS officer and a staunch nationalist, enumerated 10 mass famines since the 1860s, putting the total death toll at 15 million.

The laissez faire (non-intervention) principles to which the colonial state was committed since 1833 was applied to famines also. For years, western-educated Indians had argued that British rule was grossly impoverishing India. The Orissa famine, in which one third of the population died of starvation and disease, served as a patent proof of this thesis. It prompted nationalist Dadabhai Naoroji, to begin his lifelong investigations into Indian poverty.

An eye witness (an Englishman) of the terrible famine in the Guntur district of Madras Presidency in 1833 said: ‘It is dreadful to see what revolting food human beings may be driven to partake of. Dead dogs and horses are greedily devoured by these surviving wretches; and the other day, an unfortunate donkey having strayed from the fort, they fell upon him like a pack of wolves, tore him limb from limb and devoured him on the spot.’

Madras Famine of 1876-78: The failure of two successive monsoons caused a severe famine in the Madras Presidency during 1876-78. The viceroy Lytton adopted an hands-off approach similar to that followed in Orissa. 3.5 million people died in the presidency.

The introduction of plantation crops and slope cultivation in Ceylon, Mauritius, Fiji, Malaya, the Caribbean islands, Natal and South Africa required enormous labour. Initially slave labour was used for this purpose. But after the Company government abolished slavery in India (1843), the system of indentured was used. Under this system, labourers were hired on contract for a period of five years (indenture) and they could return to their homeland with passage paid at the end. Many impoverished peasants and weavers went hoping to earn some money. But in effect it was worse than slave labour. The colonial state allowed agents (kanganis) to trick or kidnap indigent landless labourers. 150 indenture labourers “the innocent victims of a new system of slavery” were first taken from Thanjavur in 1828 to the new British coffee plantations in Ceylon. All of them deserted. Therefore, recruitment coupled with criminal laws prohibiting desertion started in the 1830s. People courted this new form of slavery to escape starvation deaths.

In 1815, the Governor of Madras received a communication from the Governor of Ceylon (Sri Lanka) asking for coolies to work on the coffee plantations. The Madras Governor forwarded this letter to the collector of Thanjavur, who after enquiry reported back saying that the people were very much attached to the soil and hence unless some incentive was provided it was not easy to make them move out of their native soil. But the outbreak of two famines (1833 and 1843) forced the people, without any prompting from the government, to leave for Ceylon to work as coolies in coffee and tea plantations under indentured labour system. During 1843-1868, nearly 1.5 million people (1,444,407) had gone from Madras to Ceylon as indentured labourers. 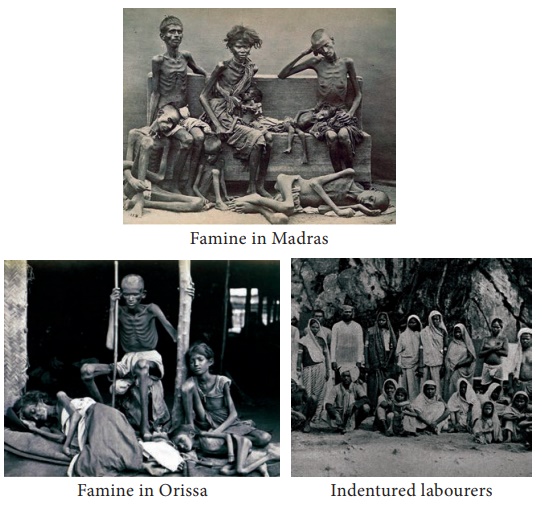 Indentured Labour System: It was a penal contract system, totally differing from the contractual labour system of the present day. According to the Indentured Labour System, the coolie (the term applied to an Indian indentured labourer) had to work in jail-like condition, was punishable by forfeiture of wages or imprisonment for (a) negligence of duty or refusal to attend to work (b) insolence or disobedience of orders or other misconduct (c) quitting service before the expiry of the contract. By invoking one of these provisions the planters on the flimsiest pretexts invariably either deprived the labourers of their wages or put them behind bars. The contract prohibited the formation of associations by coolies either with the objective of claiming increase in wages or for termination of their contract. The Plight of women in plantations is described poignanatly in Bharati’s famous song ‘Karumbu thottathile’

Dadabhai Naoroji in his Poverty and Un-British Rule in India explained how the English rulers were different from the earlier invaders. He said, in the case of former foreign invaders, they plundered and went back. They made, no doubt, great wounds, but India, with her industry, revived and healed the wounds.

When the invaders became rulers of the country they settled down in it; whatever was the condition of their rule, there was at least no material or moral drain in the county. But with the English the case was different. There are the great wounds of the first wars in the burden of the public debt and those wounds are kept perpetually open and widening by draining away the lifeblood in a continuous stream. The former rulers were like butchers hacking here and there, but the English with their scientific scalpel cut to the very heart, and yet, there is no wound to be seen, and soon the plaster of the high talk of civilization, progress and what not covers up the wound.

Naoroji argued that a great deal of wealth was drained to England in the form of Home Charges. The following constituted the Home Charges: 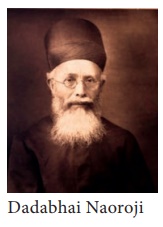 ·        Incentive to the shareholders of the Company

·        Savings and the salaries of European officials, European traders and Planters remitted to England.

·        Pensions to those who retired from civil and military services.

·        The salaries of the staff and the Secretary to Home Government, India Office at London

·        Expenses on wars fought in India and interests for the loans obtained from the banks for the conduct of wars and for the building of railroads.

India’s loan to England was 130 million pounds in 1837. It increased to 220 million pounds, of this 18 percent was for conducting wars waged against Afghanistan and Burma. A government report of 1908 informed that on account of railways, India had incurred a debt of 177.5 million pounds. In order to give outlet to the saturated capital the British secured the capital from private enterprise in England. In the form of guaranteed interest of 5 percent, the Colonial state promised to repay the interest in sterling. There was a loss of 220 million pounds to India on this score.

Calling this as drain of wealth Dadabhai Naoroji lamented that had the money drained to England remained in the pockets of Indians, India would have economically progressed. Even Gazni Mahmud’s pillage stopped after eighteen times but the British plunder seemed to be unending, he quipped. R.C. Dutt estimated that during the last decade of the reign of Queen Victoria (1891-1901), of the total income 647 pounds, 159 million pounds drained to England. This worked to 44 percent of the total income of the country.