Buxar was the real foundation battle for British dominion in India. Not only the Nawab of Bengal and Oudh, but the Mughal emperor ShahAlam II and his prime minister were also opposed to the British.

Buxar was the real foundation battle for British dominion in India. Not only the Nawab of Bengal and Oudh, but the Mughal emperor ShahAlam II and his prime minister were also opposed to the British. As a result of the Battle of Buxar, the Company ceased to be a company of merchants and became a formidable political force. Under the pretext of corruption in Bengal administration Clive was appointed Governor of Fort William. Clive did not like his predecessor Vansittart’s decision restoring Oudh to Shah Alam. So he called for fresh negotiation with Shuja-ud -daulah. As a result of this, two treaties of Allahabad were signed. The emperor granted the Diwani (revenue administration) of Bengal, Bihar and Orissa to the Company. The emperor Shah Alam II was to get the districts of Allahabad and Kora, besides an annual allowance of 26 lakhs of rupees from the revenues of Bengal, Bihar and Orissa. The province of Oudh was restored to Shuja-ud-daula on the payment of war indemnity. The treaties held the Nawab of Bengal responsible for the governance of Bengal, Bihar and Orissa. 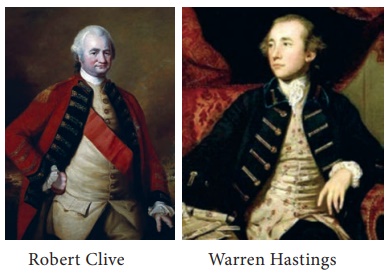 Before the emperor granted the Diwani to Clive, the Nawab of Bengal, successor of Mir Jafar, had practically transferred the Nizamat (civil administration) to the Company. So the Company had to function as Diwan and the Nizam. The Diwan’s duty included the collection of revenue and the control of civil justice. The Nizam’s function was to exercise military power and to dispense criminal justice. Thus the Company acquired the real power, while the responsibility of administration was with the Nawab. This arrangement is called Dual System or Double government or Dyarchy.

But soon the dual system began to break down. Governance without responsibility led to the outbreak of a terrible famine in 1770. Nearly one third of Bengal's population perished. The miseries of the province were intensified by the Company servants who had monopolized the sale of rice and realized huge profits. Finally, the Company realized its responsibility and passed the Regulating Act of 1773. Warren Hastings was appointed the Governor General of Bengal.