It is essential to follow biosafety (level II) precautions while handling clinical specimens suspected for anthrax in a micro-biology laboratory.

It is essential to follow biosafety (level II) precautions while handling clinical specimens suspected for anthrax in a micro-biology laboratory.

·           Gram-stained smear of a skin lesion (vesicular fluid or eschar), CSF, or blood show encapsulated, broad, large, Gram-positive bacilli. The bacteria are found as single, in pairs, and in short chains. The bacilli do not show any spores. By Gram staining, a presumptive identification of anthrax can be done (Fig. 28-5, Color Photo 26). 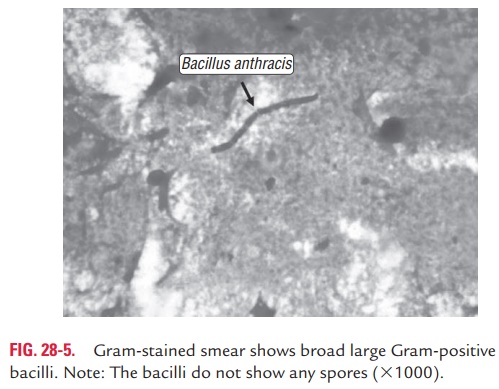 ·           Polychrome methylene blue-stained smears of blood show an amorphous purplish material, remnant of the capsular material around the bacillus. This reaction is called McFady-ean’s reaction (Fig. 28-6) and is used for presumptive diag-nosis of anthrax in animals. 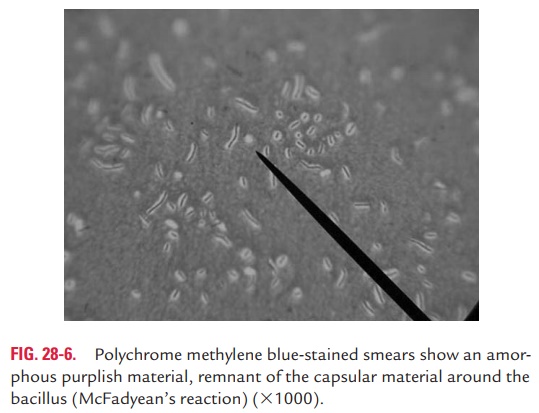 Clinical specimens are inoculated on blood or nutrient agar or on specialized selective media for isolation of B. anthracis.

Knisely’s PLET medium is used for selective isolation of B. anthracis from soil and clinical materials containing numerous other spore-forming bacteria.

B. anthracis can be isolated by collecting specimens from thecontaminated tissue and applying them over the shaven skin sites of guinea pigs. The bacteria present in the specimen pen-etrate the skin through minute abrasions. Later, the bacilli are demonstrated in the sputum and heart blood of the guinea pigs, which die 2–3 days after the inoculation.

Serodiagnosis of anthrax is based on the demonstration of antibodies against protective antigen (PA) in the patient’s serum. Gel diffusion, complement fixation, indirect hemagglu-tination, and enzyme linked immunosorbent assay (ELISA) are the tests used for demonstration of serum antibodies.

ELISA test has been used recently to demonstrate serum IgG against PA. The test is considered positive if a single acute-phase serum shows a high titer of antibodies or if a four-fold greater rise in the antibody titer is observed between acute and convalescent serum specimens. The test is 98.6% sensitive and 80% specific. Specific IgG anti-PA antibodies are detected as early as 10 days after the onset of symptoms, but a high IgG levels is observed only 40 days after the onset of symptom.

Ascoli’s thermoprecipitation test is used mainly for rapid diagnosis when the tissue received is putrid and viable bacilli are unlikely to be found. The tissues are ground up in saline and boiled for 5 minutes and filtered. When this extract is layered over the anti-anthrax serum in a narrow tube, a ring of precipitate appears at the junction of two liquids within 5 minutes in a positive case.