B. cereus is the most important pathogen known to cause foodpoisoning. B. cereus is a normal inhabitant of the soil, but it can be regularly isolated from foods, such as grains and spices.

B. cereus is the most important pathogen known to cause foodpoisoning. B. cereus is a normal inhabitant of the soil, but it can be regularly isolated from foods, such as grains and spices. Episodes of B. cereus food poisoning occur sporadically world-wide. This occurs due to the ingestion of contaminated food in which bacteria have multiplied to high levels under conditions of improper storage after cooking.

B. cereus is widely distributed in nature, such as soil, vegeta-bles, milk, cereals, spices, meat, and poultry.

B. cereus is a spore-forming Gram-positive bacillus. It isgenerally motile, but nonmotile strains may also occur. It is a facultative anaerobe. It is a nonfastidious bacterium that grows on ordinary media, such as nutrient agar. Mannitol, egg yolk, phenol red polymyxin agar (MYPA) is the selective media used for the isolation of B. cereus from feces and other sources. B. cereus ferments glucose, but not mannitol, and produces the enzyme lecithinase. B. cereus spores can survive in the soil over a long period. It resembles B. anthracis but differs from it by certain fea-tures as mentioned in Table 28-3. B. cereus produces many toxins and enzymes, which are responsible for many syndromes: 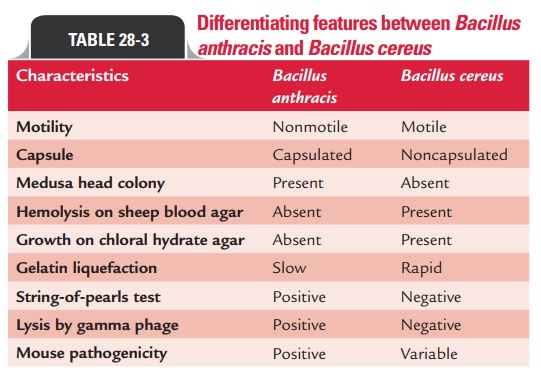 ·           The heat-labile enterotoxin is similar to the enterotoxins produced by Vibrio cholerae and Escherichia coli. The toxin stimulates adenyl cyclase-cAMP system causing profuse watery diarrhea. Like other enterotoxin, it causes accumu-lation of fluid in ligated rabbit ileal loop. The toxin causes diarrheal form of B. cereus food poisoning.

·           The heat-stable enterotoxin causes emetic form of B. cereus food poisoning, but the exact mechanism of action of the toxin is not known.

B.cereus also produces at least three other toxins (a) cerolysin,a potent haemolysin; (b) necrotic toxin, a heat-labile toxin; and (c) phospholipase C, a potent lecithinase. They have been impli-cated to cause ocular infections such as Bacillus panophthalmitis.

Diarrheal form of B. cereus food poisoning, caused by heat-labile enterotoxin, results from the consumption of contaminated vegetables, meat, or sauces. The incubation period is long (8–12 hours) during which the organisms mul-tiply and produce heat-labile toxins. The symptoms consist of acute abdominal pain, diarrhea, and nausea; vomiting is rare. The disease generally lasts for 24 hours or more. The fecal sam-ples contain small numbers of B. cereus. Diarrheal form of food poisoning is caused by B. cereus serotypes 2, 6, 8, 9, 10, or 12.

Emetic form of B. cereus food poisoning, caused by heat-stable enterotoxin, results from the consumption of contaminated rice. During the initial cooking of rice, most bacilli are killed but heat-resistant spores survive. If the food is kept at room temperature, the spores germinate to vegetative forms, which multiply and produce enterotoxins. Heat-resistant enterotoxins are not killed on reheating the rice. On ingestion of the rice, the toxin causes nausea, vomiting, and abdominal cramps after a short incubation period of 6 hours. Diarrhea and fever are rare. B. cereus is present in large numbers in the cooked rice as well asin the fecal samples of these patients. The disease usually lasts for a shorter duration of 24 hours or less. Emetic form of food poisoning is caused by B. cereus serotypes 1, 3, or 5.

Bacillus panophthalmitis results following any traumatic and penetrating injury of the eye with a soil-contaminated object. It is a serious, rapidly progressive infection of the eye resulting in loss of the vision within 48 hours of the injury.

Intravenous catheter septicemia and endocarditis are the other infections caused by B. cereus in immunocompromised patients.

Suspected food, feces, and vomitus are cultured on ordinary media or a special MYPA medium. Spore-bearing Gram-positive bacilli may be seen on smear from the colonies. Specimens from infected eye and intravenous catheter sites and other specimens may be cultured for isolation of the bacteria.

Food poisoning is mild and self-limiting, requiring no spe-cific treatment. Other Bacillus infections need prompt treatment with antibiotics. B. cereus—causing other infections—shows a high incidence of multiple drug resistance. It is resistant to penicillins and cephalosporins. It is sensitive to gentamicin, ciprofloxacin, clindamycin, and vancomycin.