Under the Companies Act, 2013, Company meetings can be classified as under:

Under the Companies Act, 2013, Company meetings can be classified as under:

2. Meetings of the Directors

(b) Creditors and of Debenture/bond holders meetings

The following picture shows the different types of company meetings 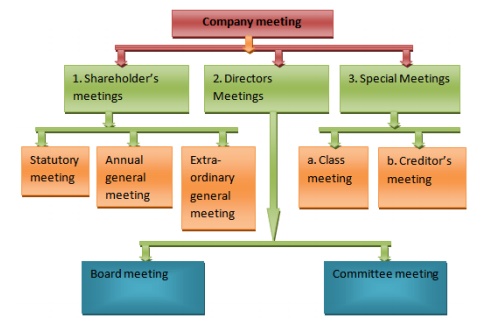 According to Companies Act, every public company, should hold a meeting of the shareholders within 6 months but not earlier than one month from the date of commencement of business of the company. This is the first general meeting of the public company is called the Statutory Meeting.

This meeting is conducted only once in the lifetime of the company. A private company or a public company having no share capital need not conduct a statutory meeting. The company gives the circular to shareholders before 21 days of the meeting.

Every year a meeting­ is held to transact the ordinary business of the company. Such meeting is called Annual General Meeting of the company (AGM). Company is bound to invite the first general meeting within eighteen months from the date of its registration. Then the general meeting will be held once in every year. The differences between two general meetings should not be more than fifteen months. Every Annual General meeting shall be held during business hours, on a day which is not a public  holiday, at the Registered­ Office of the company or at some other place within the town or village where the Registered Office is situated. AGM should be conducted by both private and public Ltd companies.

02. Meeting of the Directors

Since the administration of the company lies in the hands of the board of directors, they should meet frequently for the proper conduct of the business and to decide policy matters of the company.

Meetings of directors are called Board Meetings. Meetings of the directors provide a platform to discuss the business and take formal decisions. First meeting of directors should be convened within 30 (Thirty) days from the date of incorporation of the company.

Every listed company and every other public company having paid up share capital of ₹10 crore is required to have audit committee. This committee should meet at least four times in a year. In case of other companies, the board of directors shall nominate a director to play the role of audit committee which is functioning as a vigil mechanism.

a) Class Meeting (Meetings of Particular Share or Debenture Holders)

b) Meetings of the Creditors