Keratoderma of the palms and soles

Many genodermatoses share keratoderma of the palms and soles as their main feature; they are not described in detail here.

Keratoderma of the palms and soles

Many genodermatoses share keratoderma of the palms and soles as their main feature; they are not described in detail here. The clinical patterns and modes of inher-itance vary from family to family. Punctate, striate, diffuse and mutilating varieties have been documented, sometimes in association with metabolic disorders such as tyrosinaemia, or with changes elsewhere. The punctate type is caused by mutations in the keratin 16 gene on chromosome 17q12-q21; the epidermolytic type by mutations in the gene for keratin 9, found only on palms and soles.

The most common pattern is a diffuse one, known also as tylosis (Fig. 4.6), which is inherited as an autosomal dominant trait. In a few families these changes have been associated with carcinoma of the oesophagus, but in most families this is not the case.

Treatment tends to be unsatisfactory, but keratolytics such as salicylic acid and urea can be used in higher concentrations on the palms and soles than elsewhere. 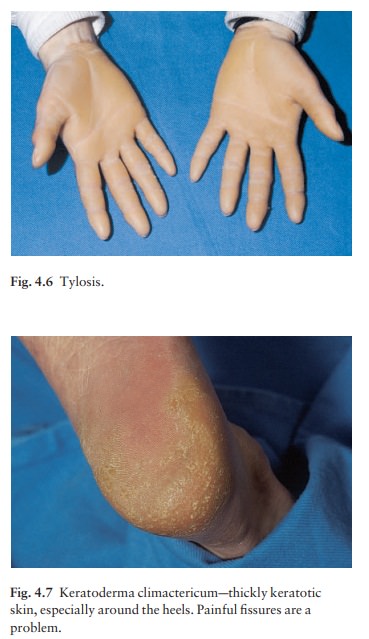 It is not uncommon for normal people to have a few inconspicuous punctate keratoses on their palms, and it is no longer thought that these relate to inter-nal malignancy, although palmar keratoses caused by arsenic may have this association. Black patients are prone to keratotic papules along their palmar creases.

Keratoderma of the palms and soles may be part of the picture of some generalized skin diseases such as pityriasis rubra pilaris  and lichen planus.

A distinctive pattern (keratoderma climactericum) is sometimes seen in middle-aged women at about the time of the menopause. It is most marked around the borders of the heels where painful fissures form and interfere with walking (Fig. 4.7). Regular paring and the use of keratolytic ointments are often more help-ful than attempts at hormone replacement, and the condition tends to settle over a few years. Acitretin in low doses may be worth a trial.