A. Describe the two systems for classifying joints. B.Explain the structure of a fibrous joint, list the three types,and give examples of each type. C.Give examples of cartilaginous joints. D.Illustrate the structure of a synovial joint and explain theroles of the components of a synovial joint. E.Classify synovial joints based on the shape of the bones inthe joint and give an example of each type. F.Demonstrate the difference between the following pairsof movements: flexion and extension; plantar flexion and dorsiflexion; abduction and adduction; supination and pronation; elevation and depression; protraction andretraction; opposition and reposition; inversion and eversion.

A.  Describe the two systems for classifying joints.

B.Explain the structure of a fibrous joint, list the three types,and give examples of each type.

E.Classify synovial joints based on the shape of the bones inthe joint and give an example of each type.

F.Demonstrate the difference between the following pairsof movements: flexion and extension; plantar flexion and dorsiflexion; abduction and adduction; supination and pronation; elevation and depression; protraction andretraction; opposition and reposition; inversion and eversion. 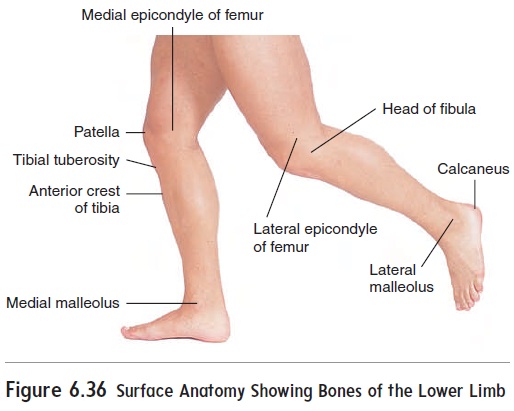 A joint, or an articulation, is a place where two bones come together. A joint is usually considered movable, but that is not always the case. Many joints exhibit limited movement, and others are completely, or almost completely, immovable.

Fibrous joints consist of two bones that are united by fibroustissue and that exhibit little or no movement. Joints in this group are further subdivided on the basis of structure as sutures, syn-desmoses, or gomphoses. Sutures (soo′\choorz) are fibrous joints between the bones of the skull (see figure 6.11). In a newborn, some parts of the sutures are quite wide and are called fontanels (fon′\tă-nelz′\), or soft spots (figure 6.37). They allow flexibility in the skull during the birth process, as well as growth of the head after birth. Syndesmoses (sin′\dez-mō′\sēz) are fibrous joints in which the bones are separated by some distance and held together by ligaments. An example is the fibrous mem-brane connecting most of the distal parts of the radius and ulna. Gomphoses (gom-fō′\sēz) consist of pegs fitted into sockets andheld in place by ligaments. The joint between a tooth and its socket is a gomphosis. 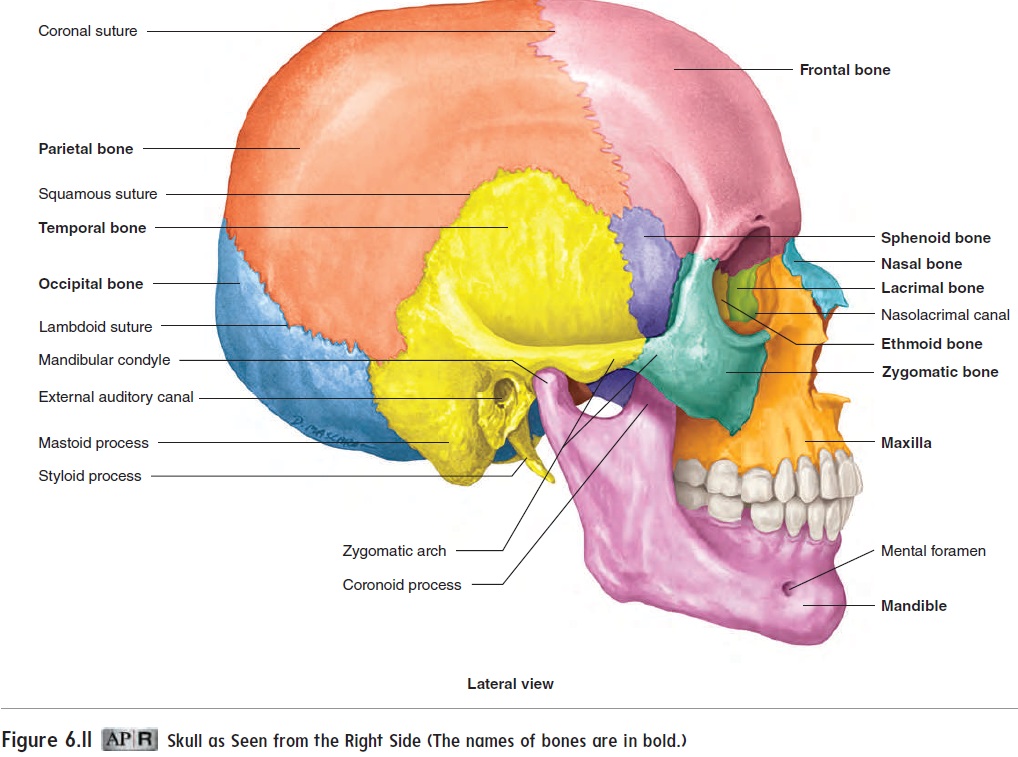 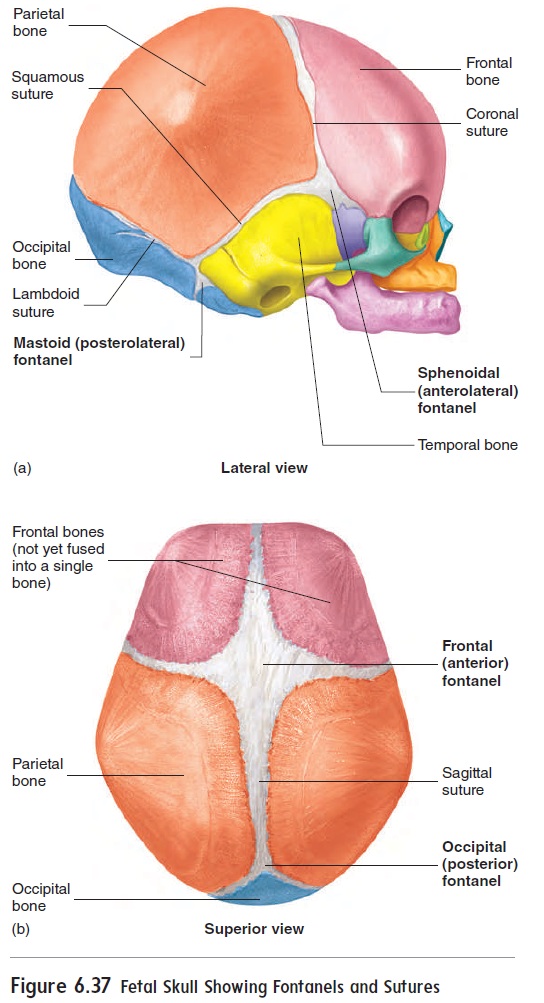 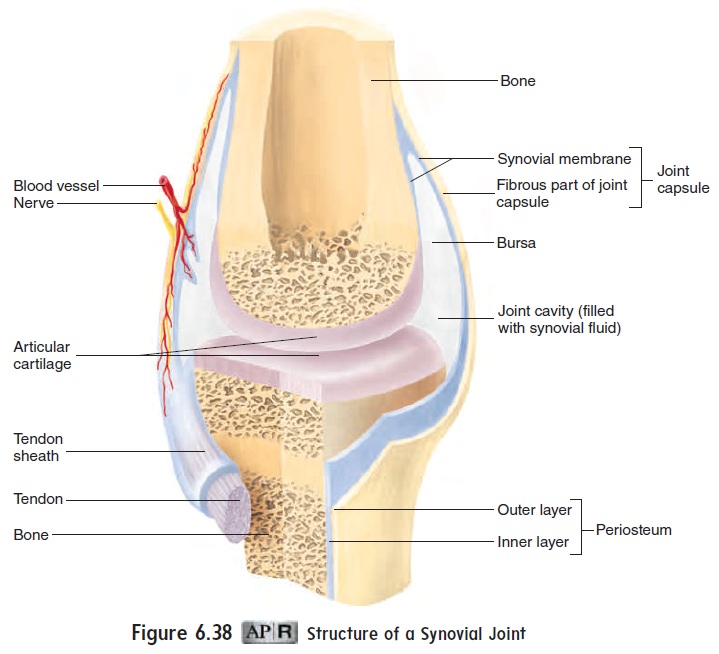 Several features of synovial joints are important to their func-tion (figure 6.38). The articular surfaces of bones within synovial joints are covered with a thin layer of articular cartilage, which provides a smooth surface where the bones meet. The joint cav-ity is filled with fluid. The cavity is enclosed by a joint capsule, which helps hold the bones together and allows for movement. Portions of the fibrous part of the joint capsule may be thickened to form ligaments. In addition, ligaments and tendons outside the joint capsule contribute to the strength of the joint.

A synovial membrane lines the joint cavity everywhere except over the articular cartilage. The membrane produces synovial\ fluid, which is a complex mixture of polysaccharides,proteins, lipids, and cells. Synovial fluid forms a thin, lubricating film covering the surfaces of the joint. In certain synovial joints, the synovial membrane may extend as a pocket, or sac, called a bursa (ber′\să; pocket). Bursae are located between structures that rub together, such as where a tendon crosses a bone; they reduce fric-tion, which could damage the structures involved. Inflammation of a bursa, often resulting from abrasion, is called bursitis. A synovial membrane may extend as a tendon sheath along some tendons associated with joints (figure 6.38).

Synovial joints are classified according to the shape of the adjoin-ing articular surfaces (figure 6.39). Plane joints, or gliding joints, consist of two opposed flat surfaces that glide over each other. Examples of these joints are the articular facets between vertebrae. 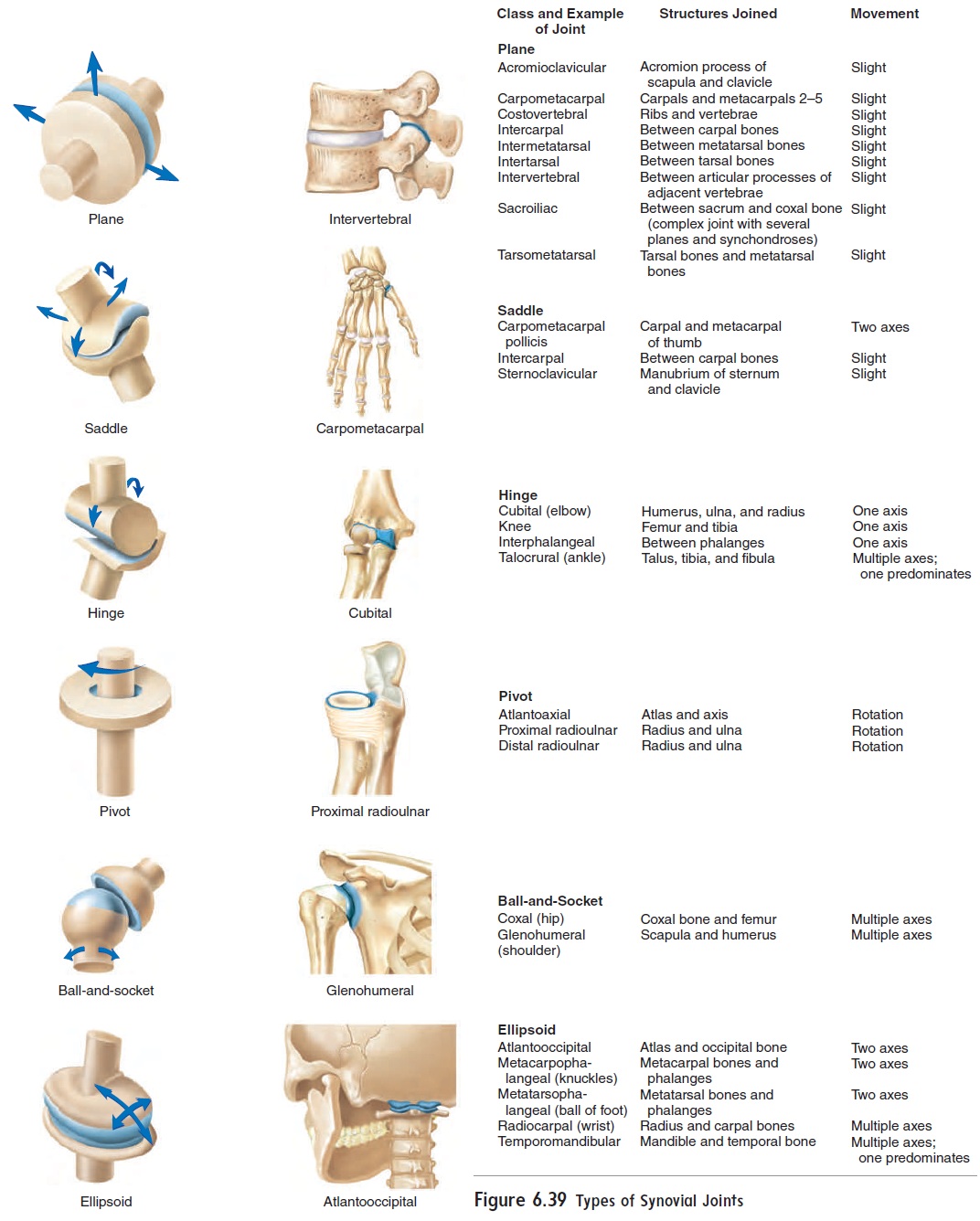 Saddle joints consist of two saddle-shaped articulating surfacesoriented at right angles to each other. Movement in these joints can occur in two planes. The joint between the metacarpal bone and the carpal bone (trapezium) of the thumb is a saddle joint. Hinge joints permit movement in one plane only. They consist of a convex cylinder of one bone applied to a corresponding con- cavity of the other bone. Examples are the elbow and knee joints (figure 6.40a,b). The flat condylar surface of the knee joint is modified into a concave surface by shock-absorbing fibrocartilage pads called menisci (mĕ-nis′\sı̄). Pivot joints restrict movement to rotation around a single axis. Each pivot joint consists of a cylindrical bony process that rotates within a ring composed partly of bone and partly of ligament. The rotation that occurs between the axis and atlas when shaking the head “no” is an example. The articulation between the proximal ends of the ulna and radius is also a pivot joint. 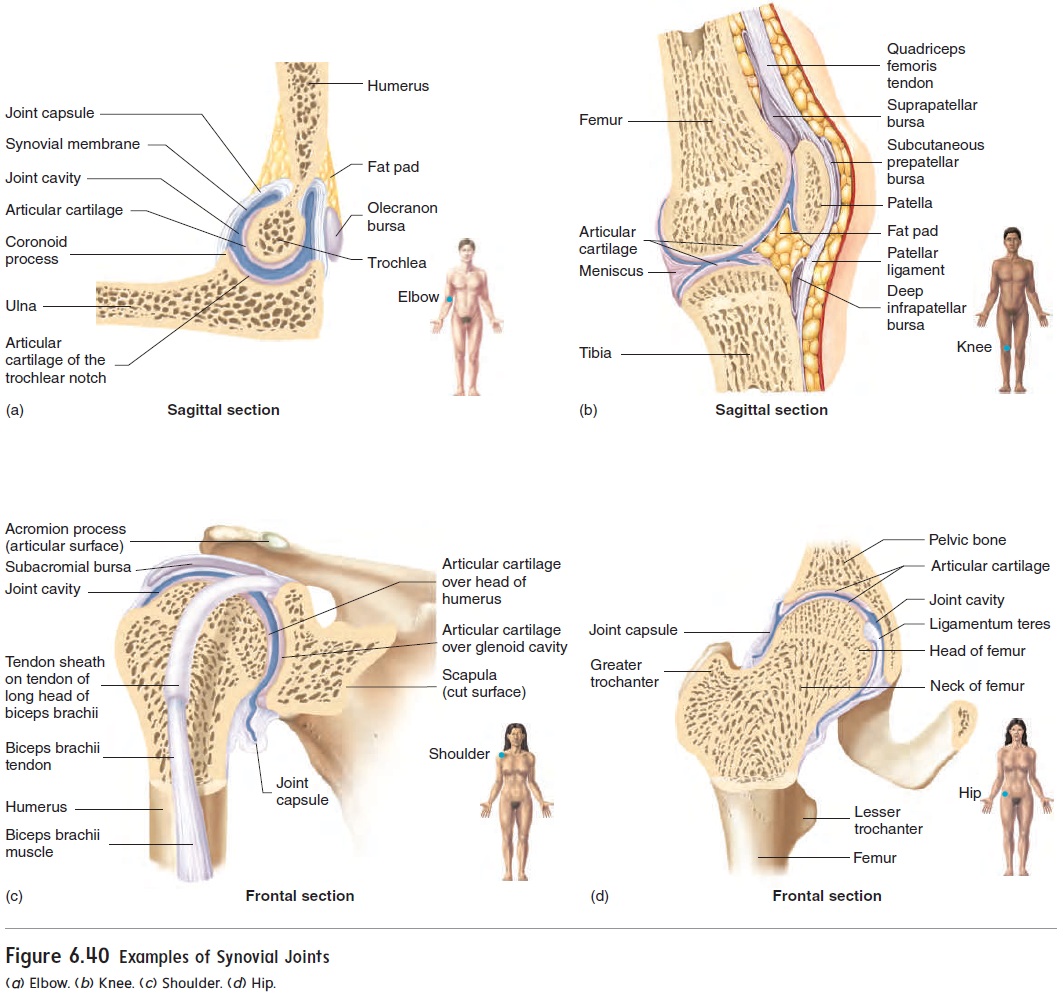 Ball-and-socket joints consist of a ball (head) at the end of one bone and a socket in an adjacent bone into which a portion of the ball fits. This type of joint allows a wide range of move-ment in almost any direction. Examples are the shoulder and hip joints (figure 6.40c,d). Ellipsoid (ē-lip′\soyd) joints, or condyloid (kon′\di-loyd) joints, are elongated ball-and-socket joints. The shape of the joint limits its range of movement nearly to that of a hinge motion, but in two planes. Examples of ellipsoid joints are the joint between the occipital condyles of the skull and the atlas of the vertebral column and the joints between the metacarpal bones and phalanges.

The types of movement occurring at a given joint are related to the structure of that joint. Some joints are limited to only one type of movement, whereas others permit movement in several directions. All the movements are described relative to the ana-tomical position. Because most movements are accompanied by movements in the opposite direction, they are often illustrated in pairs (figure 6.41). 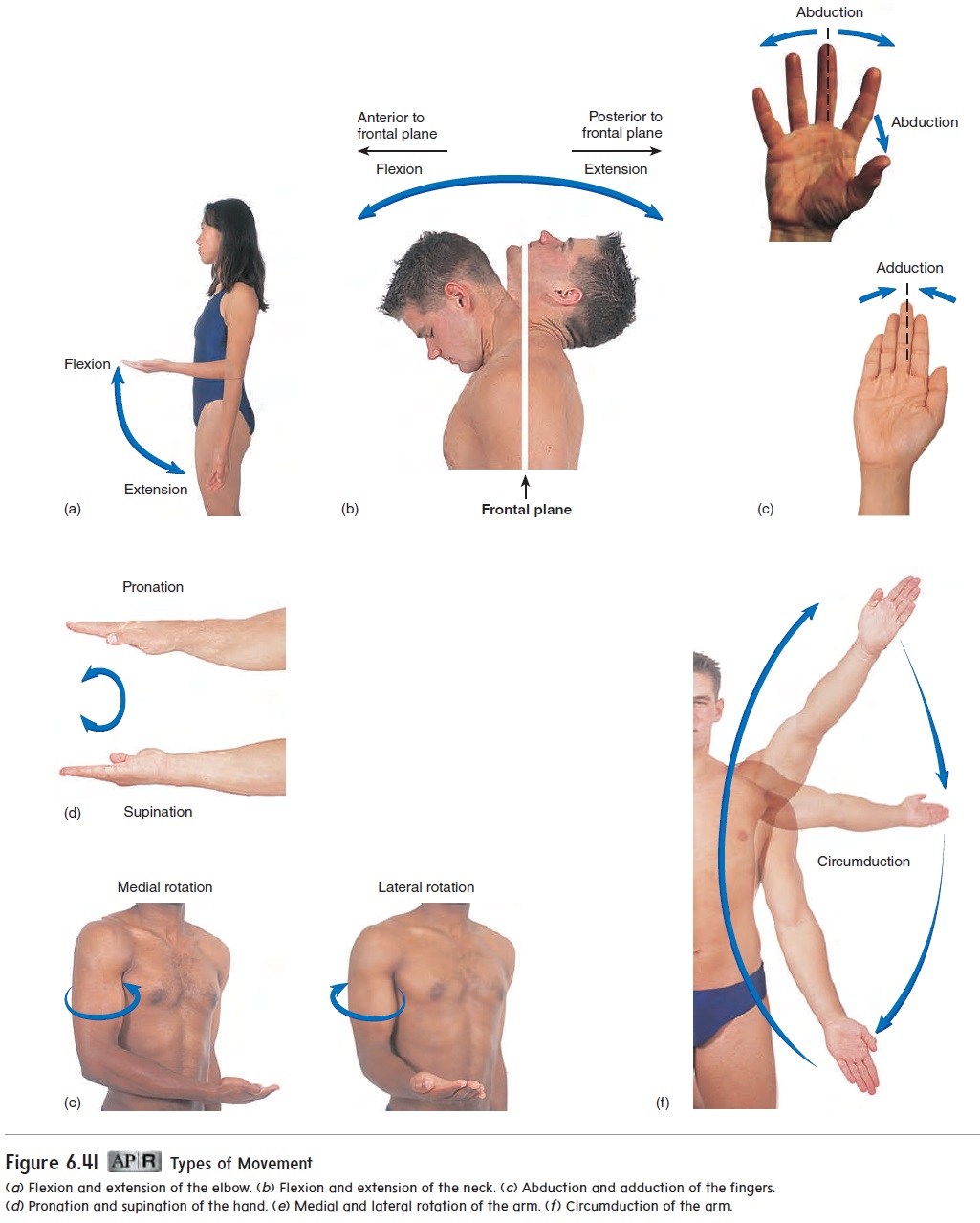 Circumduction (ser-kŭm-dŭk′\shŭn) occurs at freely movablejoints, such as the shoulder. In circumduction, the arm moves so that it traces a cone where the shoulder joint is at the cone’s apex (figure 6.41f\).

In addition to the movements pictured in figure 6.41, several other movement types have been identified:

·            Protraction (prō-trak′\shŭn) is a movement in which astructure, such as the mandible, glides anteriorly.

·            Elevation is movement of a structure in a superior direction.Closing the mouth involves elevation of the mandible.

·            Depression is movement of a structure in an inferior direction.Opening the mouth involves depression of the mandible.

·            Reposition returns the digits to the anatomical position.

Most movements that occur in the course of normal activities are combinations of movements. A complex movement can be described by naming the individual movements involved.

When the bones of a joint are forcefully pulled apart and the ligaments around the joint are pulled or torn, a sprain results. A separation exists when the bones remain apart after injury to ajoint. A dislocationis when the end of one bone is pulled out ofthe socket in a ball-and-socket, ellipsoid, or pivot joint.

Hyperextension is usually defined as an abnormal, forcedextension of a joint beyond its normal range of motion. For example, if a person falls and attempts to break the fall by putting out a hand, the force of the fall directed into the hand and wrist may cause hyperextension of the wrist, which may result in sprained joints or broken bones. Some health professionals, however, define hyperextension as the normal movement of a structure into the space posterior to the anatomical position.