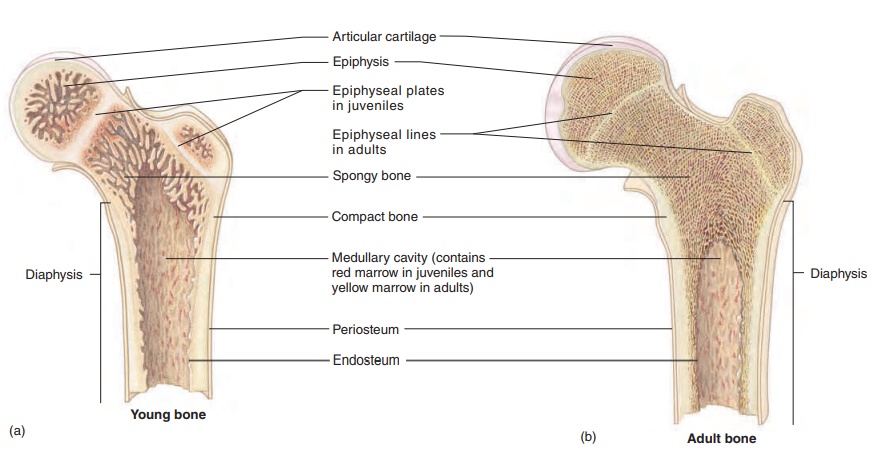 A. Explain the structural differences between compact bone and spongy bone. B. Outline the processes of bone ossification, growth, remodeling, and repair.

There are four categories of bone, based on their shape: long, short, flat, and irregular. Long bones are longer than they are wide. Most of the bones of the upper and lower limbs are long bones. Shortbonesare approximately as wide as they are long; examples arethe bones of the wrist and ankle. Flat bones have a relatively thin, flattened shape. Examples of flat bones are certain skull bones, the ribs, the scapulae, and the sternum. Irregular bones include the vertebrae and facial bones, which have shapes that do not it readily into other three categories.

Structure of a Long Bone

A long bone serves as a useful model for illustrating the parts of a typical bone (figure 6.2). Each long bone consists of a central ends, each called an epiphysis (e-pif′\i-sis; growing upon). A thin layer ofarticular (ar-tik′ ū-lăr; joint) cartilage covers the ends of the epiphyses where the bone articulates (joins) with other bones. A long bone that is still growing has an epiphyseal plate, or growth plate, composed of cartilage, between each epiphysis andthe diaphysis (figure 6.2a). The epiphyseal plate is where the bone grows in length. When bone growth stops, the cartilage of each epiphyseal plate is replaced by bone and becomes an epiphysealline (figure 6.2b). 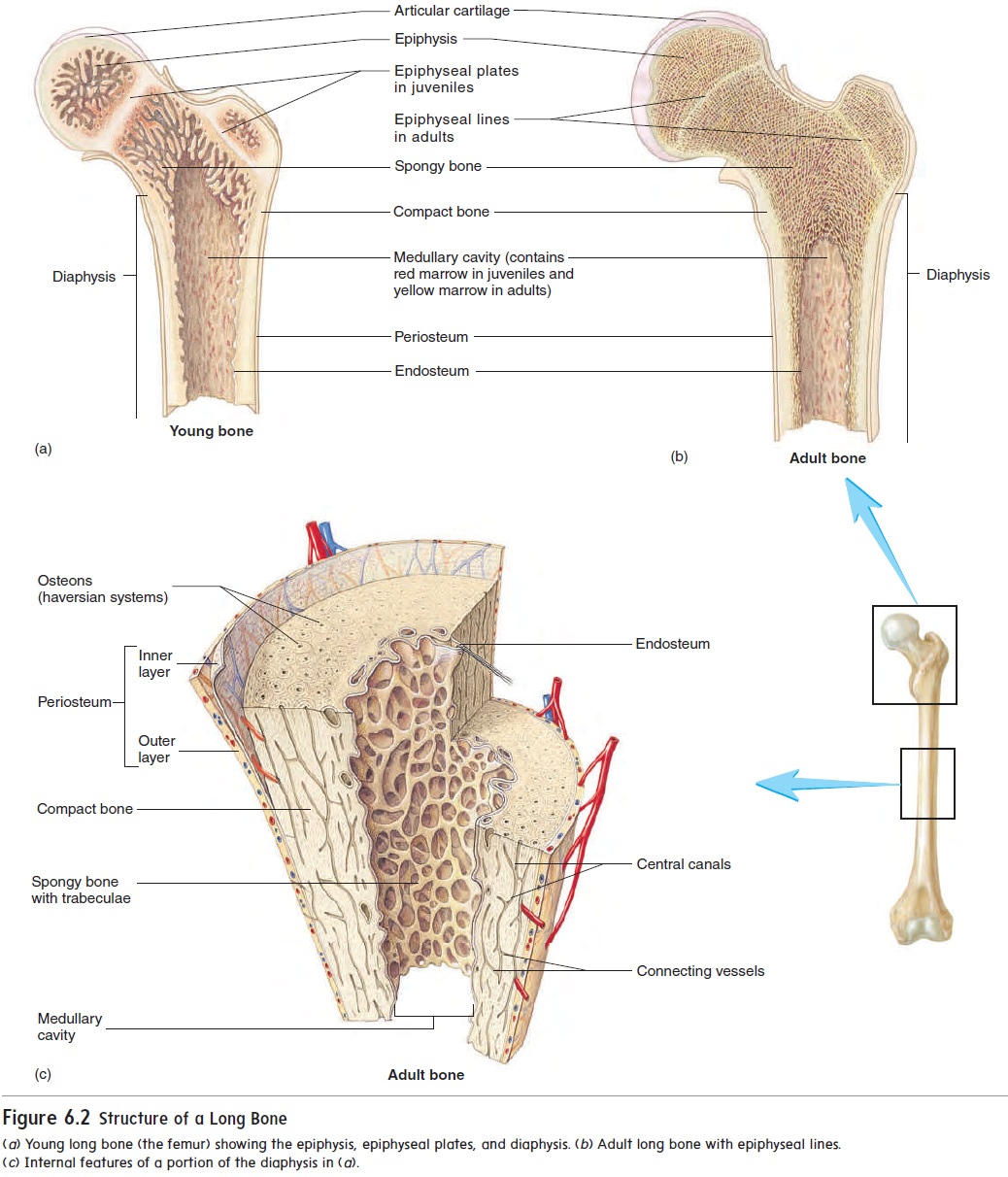 Bones contain cavities, such as the large medullary cavity in the diaphysis, as well as smaller cavities in the epiphyses of long bones and in the interior of other bones. These spaces are filled with soft tissue called marrow. Yellow marrow consists mostly of adi-pose tissue. Red marrow consists of blood-forming cells and is the only site of blood formation in adults . Children’s bones have proportionately more red marrow than do adult bones because, as a person ages, red marrow is mostly replaced by yellow marrow. In adults, red marrow is confined to the bones in the central axis of the body and in the most proximal epiphyses of the limbs. \

Most of the outer surface of bone is covered by dense con-nective tissue called the periosteum (per-ē-os′\tē-ŭm; peri, around + osteon, bone), which consists of two layers and contains blood vessels and nerves (figure 6.2c). The surface of the medullary cavity is lined with a thinner connective tissue membrane, the endosteum (en-dos′\tē-ŭm; endo, inside). 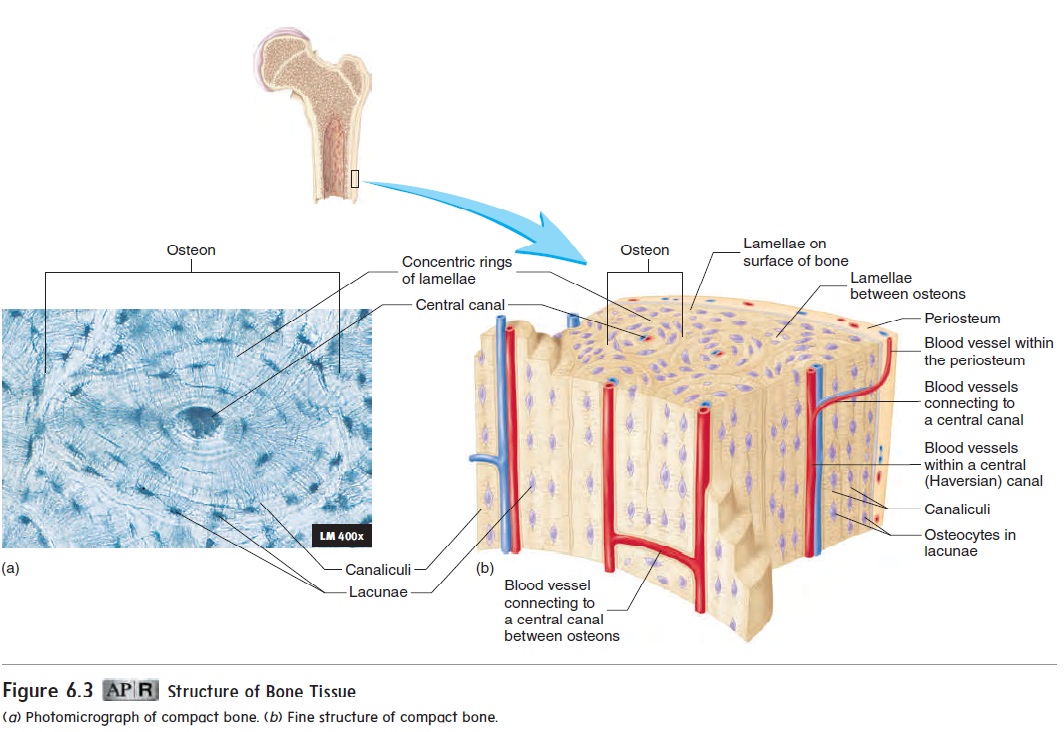 Bone tissue found throughout the skeleton is divided into two major types, based on the histological structure. Compact bone is mostly solid matrix and cells. Spongy bone, or cancellous (kan′\sĕ-lŭs) bone,consists of a lacy network of bone with many small, marrow-filled spaces.

Compact bone (figure 6.3) forms most of the diaphysis of a long bone and the thinner surfaces of all other bones. As you can see in figure 6.3, compact bone has a predictable pattern of repeating units. These units are called osteons (os′\tē-onz). Each osteon con-sists of concentric rings of lamellae surrounding a central canal, or Haversian (ha-ver′\shan) canal. As described earlier, osteocytes are located in lacunae between the lamellae of each osteon. Blood vessels that run parallel to the long axis of the bone are located in the central canals. Osteocytes are connected to one another by cell processes in canaliculi. The canaliculi give the osteon the appear-ance of having tiny cracks within the lamellae.

Spongy bone, so called because of its appearance, is located mainly in the epiphyses of long bones. It forms the interior of all other bones. Spongy bone consists of delicate interconnecting rods or plates of bone called trabeculae (tră-bek′\ū-lē; beams), which resemble the beams or scaffolding of a building (figure 6.4a). Like scaffolding, the trabeculae add strength to a bone without the added weight that would be present if the bone were solid mineralized matrix. The spaces between the trabeculae are filled with marrow. Each trabecula con-sists of several lamellae with osteocytes between them (figure 6.4b). Usually, no blood vessels penetrate the trabeculae, and the trabeculae have no central canals. Nutrients exit vessels in the marrow and pass by diffusion through canaliculi to the osteocytes of the trabeculae. 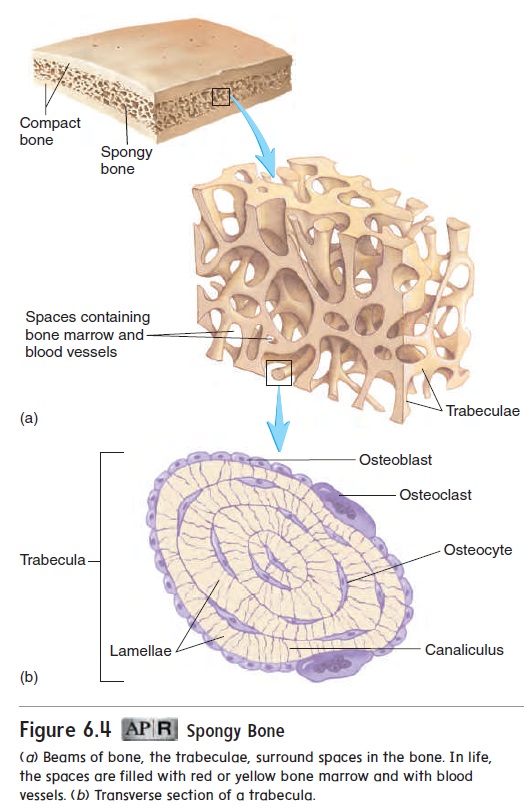 Ossification (os′\i-fi-kā′\shŭn;os,bone+facio,to make) is theformation of bone by osteoblasts. After an osteoblast becomes completely surrounded by bone matrix, it becomes a mature bone cell, or osteocyte. In the fetus, bones develop by two pro-cesses, each involving the formation of bone matrix on preexisting connective\ tissue (figure 6.5). Bone formation that occurs within connective tissue membranes is called intramembranous ossifica-tion, and bone formation that occurs inside cartilage is called endochondral ossification. Both types of bone formation result in compact and spongy bone.

Intramembranous (in′\tră-mem′\brā-nŭs) ossification occurswhen osteoblasts begin to produce bone in connective tissue membranes. This occurs primarily in the bones of the skull. Osteoblasts line up on the surface of connective tissue fibers and begin depositing bone matrix to form trabeculae. The process begins in areas called ossification centers (figure 6.5a), and the trabeculae radiate out from the centers. Usually, two or more ossi-fication centers exist in each flat skull bone, and the skull bones result from fusion of these centers as they enlarge. The trabeculae are constantly remodeled after their initial formation, and they may enlarge or be replaced by compact bone.

The bones at the base of the skull and most of the remaining skeletal system develop through the process of endochondralossification from cartilage models. The cartilage models havethe general shape of the mature bone (figure 6.6, step 1). During endochondral ossification, cartilage cells, called chondrocytes, increase in number, enlarge, and die. Then the cartilage matrix becomes calcified (figure 6.6, step 2). As this process is occurring in the center of the cartilage model, blood vessels accumulate in the perichondrium. The presence of blood vessels in the outer surface of future bone causes some of the unspecified connective tissue cells on the surface to become osteoblasts. These osteoblasts then produce a collar of bone around part of the outer surface of the diaphysis, and the perichondrium becomes periosteum in that area. Blood vessels also grow into the center of the diaphyses, bringing in osteoblasts and stimulating ossification. The center part of the diaphysis, where bone first begins to appear, is called the primary ossification center (figure 6.6, step 3). Osteoblasts invade spaces in the center of the bone left by the dying carti-lage cells. Some of the calcified cartilage matrix is removed by osteoclasts, and the osteoblasts line up on the remaining calcified matrix and begin to form bone trabeculae. As the bone develops, it is constantly changing. A medullary cavity forms in the center of the diaphysis as osteoclasts remove bone and calcified cartilage, which are replaced by bone marrow. Later, secondary ossificationcentersform in the epiphyses (figure 6.6, step 4). 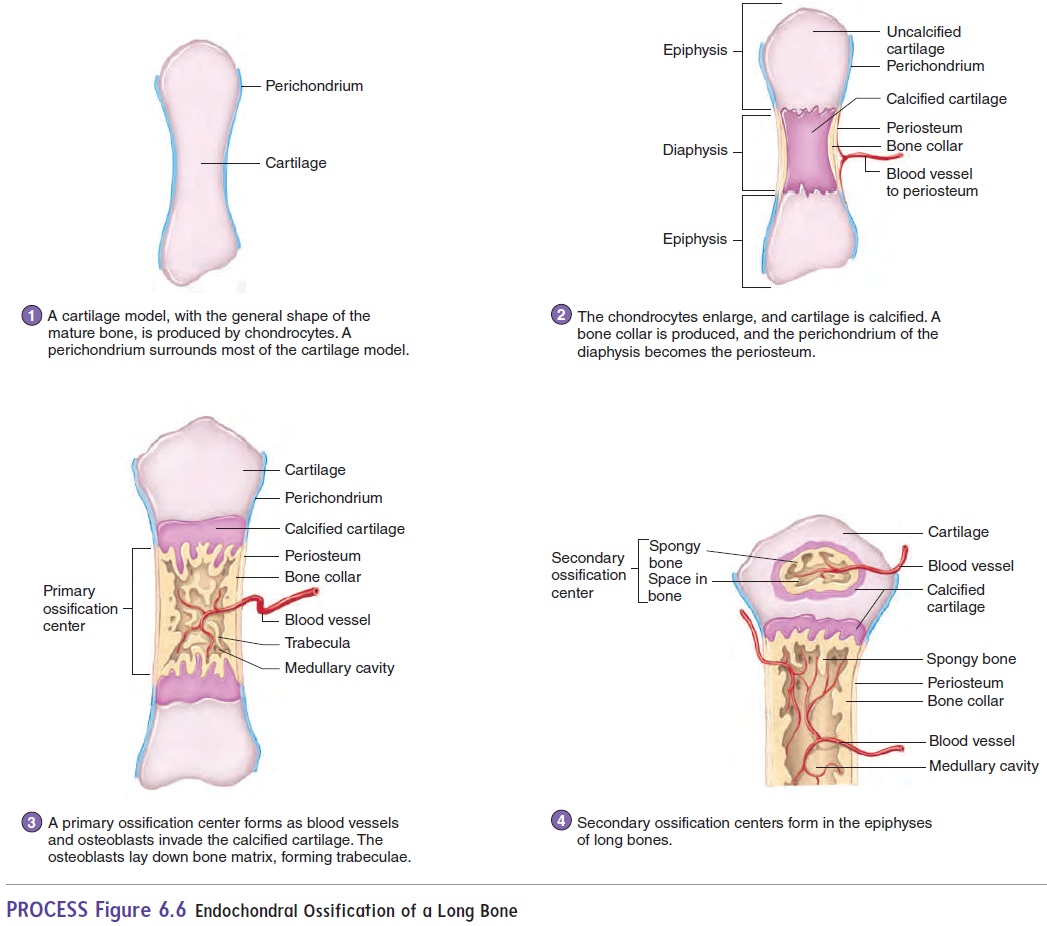 Bone growth occurs by the deposition of new bone lamellae onto existing bone or other connective tissue. As osteoblasts deposit new bone matrix on the surface of bones between the periosteum and the existing bone matrix, the bone increases in width, or diameter. This process is called appositional growth. Growth in the length of a bone, which is the major source of increased height in an individual, occurs in the epiphyseal plate. This type of bone growth occurs through endochondral ossification (figure 6.7). Chondrocytes increase in number on the epiphyseal side of the epiphyseal plate. They line up in columns parallel to the long axis of the bone, causing the bone to elongate. Then the chondrocytesenlarge and die. The cartilage matrix becomes \calcified. Much of the cartilage that forms around the enlarged cells is removed by osteoclasts, and the dying chondrocytes are replaced by osteo-blasts. The osteoblasts start forming bone by depositing bone lamellae on the surface of the calcified cartilage. This process produces bone on the diaphyseal side of the epiphyseal plate. 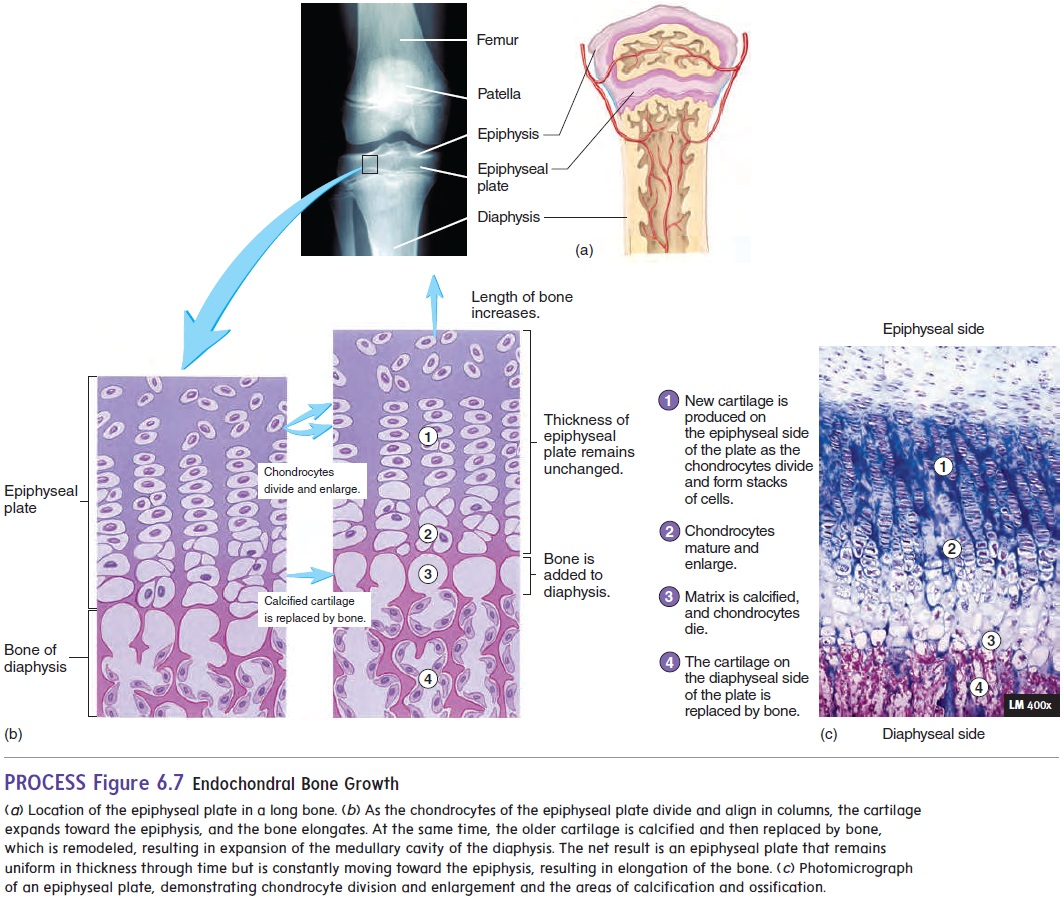 Bone remodeling involves the removal of existing bone by osteoclastsand the deposition of new bone by osteoblasts. Bone remodeling occurs in all bone. Remodeling is responsible for changes in bone shape, the adjustment of bone to stress, bone repair, and calcium ion regulation in the body fluids. Remodeling is also involved in bone growth when newly formed spongy bone in the epiphyseal plate forms compact bone.

A long bone increases in length and diameter as new bone is deposited on the outer surface and growth occurs at the epiphyseal plate. At the same time, bone is removed from the inner, medullary surface of the bone. As the bone diameter increases, the thickness of the compact bone relative to the medul-lary cavity tends to remain fairly constant. If the size of the medullary cavity did not also increase as bone size increased, the compact bone of the diaphysis would become thick and very heavy.

Because bone is the major storage site for calcium in the body, bone remodeling is important to maintain blood calcium levels within normal limits. Calcium is removed from bones when blood calcium levels decrease, and it is deposited when dietary calcium is adequate. This removal and deposition is under hormonal control (see “Bone and Calcium Homeostasis” in the next section).

If too much bone is deposited, the bones become thick or develop abnormal spurs or lumps that can interfere with normal function. Too little bone formation or too much bone removal, as occurs in osteoporosis, weakens the bones and makes them sus-ceptible to fracture (see Systems Pathology, “Osteoporosis”).

Sometimes a bone is broken and needs to be repaired. When this occurs, blood vessels in the bone are also damaged. The vessels bleed, and a clot (hematoma) forms in the damaged area (figure 6.8, step 1). Two to three days after the injury, blood vessels and cells from surrounding tissues begin to invade the clot. Some of these cells produce a fibrous network of connective tissue between the broken bones, which holds the bone fragments together and fills the gap between them. Other cells produce islets of cartilage in the fibrous network. The network of fibers and islets of cartilage between the two bone fragments is called a callus (figure 6.8, step 2).

Osteoblasts enter the callus and begin forming spongy bone (figure 6.8, step 3). Spongy bone formation in the callus is usually complete 4–6 weeks after the injury. Immobilization of the bone is critical up to this time because movement can refracture the delicate new matrix. Subsequently, the spongy bone is slowly remodeled to form compact and spongy bone, and the repair is complete (figure 6.8, step 4). Although immobilization at a fracture point is critical dur-ing the early stages of bone healing, complete immobilization is not good for the bone, the muscles, or the joints. Not long ago, it was common practice to immobilize a bone completely for as long as 10 weeks. But we now know that, if a bone is immobilized for as little as 2 weeks, the muscles associated with that bone may lose as much as half their strength. Furthermore, if a bone is completely immobilized, it is not subjected to the normal mechanical stresses that help it form. Bone matrix is reabsorbed, and the strength of the bone decreases. In experimental animals, complete immobilization of the back for 1 month resulted in up to a threefold decrease in vertebral compression strength. Modern therapy attempts to balance bone immobilization with enough exercise to keep muscle and bone from decreasing in size and strength and to maintain joint mobil-ity. These goals are accomplished by limiting the amount of time a cast is left on the patient and by using “walking casts,” which allow some stress on the bone and some movement. Total healing of the fracture may require several months. If a bone heals prop-erly, the healed region can be even stronger than the adjacent bone.