The principal role of iron is to deliver oxygen to body tissues.

Iron is also a component of myoglobin, a protein compound in muscles that provides oxygen to cells, and it is a constituent of other body compounds involved in oxygen transport. Iron is utilized by enzymes that are involved in the making of amino acids, hormones, and neurotransmitters.

Sources.Meat, poultry, and fish are the best sources of iron because onlythe flesh of animals contains heme iron. Heme iron is absorbed more than twice as efficiently as nonheme iron. Nonheme iron is found in whole-grain cereals, enriched grain products, vegetables, fruit, eggs, meat, fish, and poultry. The rate of absorption of nonheme iron is strongly influenced by dietary factors and the body’s iron stores. Factors affecting the absorption of both heme and nonheme iron are listed in Table 8-7. 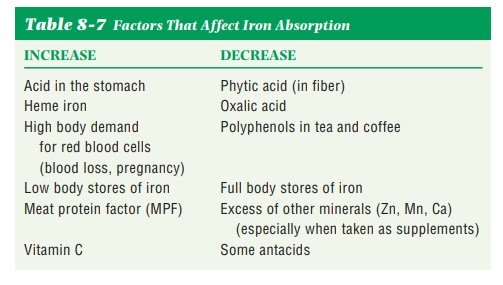 For iron to be absorbed, it must be chemically changed from ferric to ferrous iron. This change is accomplished by the hydrochloric acid in the stom-ach. Absorption of nonheme iron can be enhanced by consuming a vitamin C–rich food and a nonheme iron–rich food at the same meal. Vitamin C holds onto and keeps the iron in its ferrous form, which facilitates absorption. Meat protein factor (MPF) is a substance in meat, poultry, and fish that aids in the absorption of nonheme iron.

Phytic acid and oxalic acid can bind iron and reduce the body’s absorp-tion of it. Polyphenols, such as tannins in tea and related substances in coffee, also reduce the absorption of iron. Antacids containing calcium and calcium supplements should be taken several hours before or after a meal high in iron because calcium also interferes with iron absorption.

Requirements.The NRC has determined that men lose approximately1 mg of iron a day and that women lose 1.5 mg a day. On the assumption that only 10% of ingested iron is absorbed, the DRI for men has been set at 10 mg and for women from the age of 11 through the childbearing years at 15 mg. This is doubled during pregnancy and is difficult to meet by diet alone. Consequently, an iron supplement is commonly prescribed during pregnancy. Women should make a special effort to include iron-rich foods in their diets atall times. The rapid growth periods of infancy and adolescence also produce a heavy need for iron.

Some people suffer from hemochromatosis. This is a condition due to an inborn error of metabolism and causes excessive absorption of iron. The onset of this disorder can happen at any age. Unless treated, this condition can dam-age the liver, spleen, and heart. To control the buildup of iron, patients with this condition must give blood on a regular basis.