Current mode DACs operates based on the ladder currents. The ladder is formed by resistance R in the series path and resistance 2R in the shunt path. Thus the current is divided into i1 , i2, i3 …………in. in each arm. The currents are either diverted to the ground bus (io) or to the Virtual-ground bus ( io ). 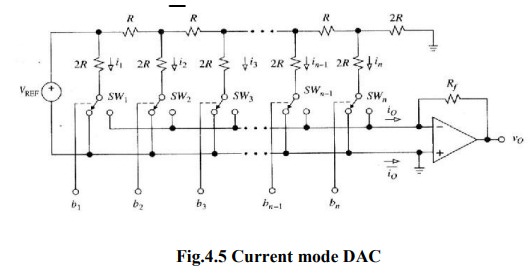 The currents are given as

And the relationship between the currents are given as

Using the bits to identify the status of the switches, and letting V0 = -Rf io gives

The two currents io and io are complementary to each other and the potential of io bus must be sufficiently close to that of the io bus. Otherwise, linearity errors will occur. The final op-amp is usedas current to voltage converter.

1.        The major advantage of current mode D/A converter is that the voltage change across each switch is minimal. So the charge injection is virtually eliminated and the switch driver design is made simpler.

2.    In Current mode or inverted ladder type DACs, the stray capacitance do not affect the Speed of response of the circuit due to constant ladder node voltages. So improved speed performance.

This is the alternative mode of DAC and is called so because the 2R resistance in the shunt path is switched between two voltages named as VL and VH. The output of this DAC is obtained from the leftmost ladder node. As the input is sequenced through all the possible binary state starting from All 0s (0…..0) to all 1s (1…..1). The voltage of this node changes in steps of 2-n (VH - VL) from the minimum voltage of Vo = VL to the maximum of Vo = VH - 2-n (VH - VL). 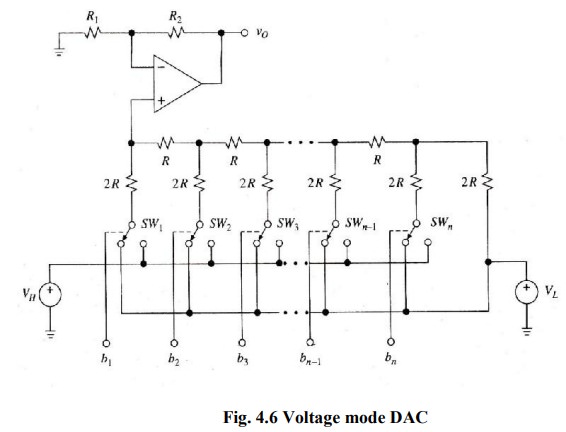 1.      The major advantage of this technique is that it allows us to interpolate between any two voltages, neither of which need not be a zero.

2.    More accurate selection and design of resistors R and 2R are possible and simple construction.

3.    The binary word length can be easily increased by adding the required number or R-2R sections.