The binary-weighted-resistor DAC employs the characteristics of the inverting summer Op Amp circuit.

The binary-weighted-resistor DAC employs the characteristics of the inverting summer Op Amp circuit. In this type of DAC, the output voltage is the inverted sum of all the input voltages. If the input resistor values are set to multiples of two: 1R, 2R and 4R, the output voltage would be equal to the sum of  V1, V2/2 and V3/4.  V1 corresponds to the most significant bit (MSB) while V3 corresponds to the least significant bit (LSB). 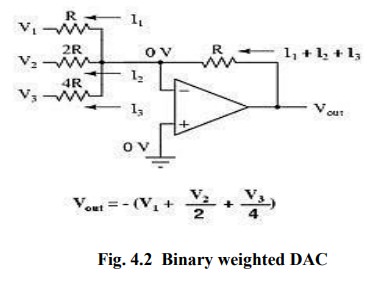 The circuit for a 4-bit DAC using binary weighted resistor network is shown below: 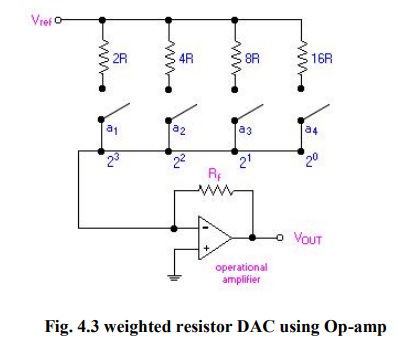 The operational amplifier is used as a summing amplifier, which gives a weighted sum of the binary input based on the voltage, Vref.

For a 4-bit DAC, the relationship between Vout and the binary input is as follows: 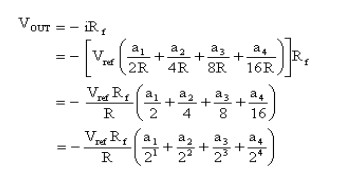 The negative sign associated with the analog output is due to the connection to a summing amplifier, which is a polarity-inverting amplifier. When a signal is applied to the latter type of amplifier, the polarity of the signal is reversed (i.e. a + input becomes -, or vice versa).

For a n-bit DAC, the relationship between Vout and the binary input is as follows:

o    The most significant problem is the large difference in resistor values required between the LSB and MSB, especially in the case of high resolution DACs (i.e. those that has large number of bits). For example, in the case of a 12-bit DAC, if the MSB is 1 k Ω, then the LSB is a staggering 2 MΩ.

o    The maintenance of accurate resistances over a large range of values is problematic. With the current IC fabrication technology, it is difficult to manufacture resistors over a wide resistance range that maintains an accurate ratio especially with variations in temperature.