Sample-and-hold (S/H) is an important analog building block with many applications, including analog-to-digital converters (ADCs) and switched-capacitor filters.

Sample-and-hold (S/H) is an important analog building block with many applications, including analog-to-digital converters (ADCs) and switched-capacitor filters. The function of the S/H circuit is to sample an analog input signal and hold this value over a certain length of time for subsequent processing.

Taking advantages of the excellent properties of MOS capacitors and switches, traditional switched capacitor techniques can be used to realize different S/H circuits [1]. The simplest S/H circuit in MOS technology is shown in Figure 1, where Vin is the input signal, M1 is an MOS transistor operating as the sampling switch, Ch is the hold capacitor, ck is the clock signal, and Vout is the resulting sample-and-hold output signal.

As depicted by Figure 4. , in the simplest sense, a S/H circuit can be achieved using only one MOS transistor and one capacitor. The operation of this circuit is very straightforward.

Figure 4, in the simplest sense, a S/H circuit can be achieved using only one MOS transistor and one capacitor. The operation of this circuit is very straightforward. Whenever ck is high, the MOS switch is on, which in turn allows Vout to track Vin. On the other hand, when ck is low, the MOS switch is off. During this time, Ch will keep Vout equal to the value of Vin at the instance when ck goes low.

Unfortunately, in reality, the performance of this S/H circuit is not as ideal as described above. The two major types of errors occur. They are charge injection and clock feed through, that are associated with this S/H implementation. Three new S/H techniques, all of which try to minimize the errors caused by charge injection and/or clock feed through. 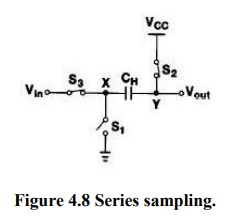 When the circuit is in sample mode, both switches S2 and S3 are on, while S1 is off. Then,S2 is turned off first, which means Vout is equal to VCC (or VDD for most circuits) and the voltage drop across Ch will be VCC – Vin. Subsequently, S3 is turned off and S1 is turned on simultaneously. By grounding node X, Vout is now equal to VCC –Vin, and the drop from VCC to VCC – Vin is equal to the instantaneous value of the input.

As a result, this is actually an inverted S/H circuit, which requires inversion of the signal at a later stage. Since the hold capacitor is in series with the signal, series sampling can isolate the common- mode levels of the input and the output.

This is one advantage of series sampling over parallel sampling. In addition, unlike parallel sampling, which suffers from signal-dependent charge injection, series sampling does not exhibit such behavior because S2 is turned off before S3. Thus, the fact that the gate-to-source voltage, VGS, of S2 is constant means that charge injection coming from S2 is also constant (as opposed to being signal-dependent), which means this error can be easily eliminated through differential operation.

This S/H technique takes advantage of the fact that when a MOS transistor is in the saturation region, the channel is pinched off and disconnected from the drain. Therefore, if the hold capacitor is connected to the drain of the MOS transistor, charge injection will only go to the source junction, leaving the drain unaffected. Based on this concept, a switched op- amp (SOP) based S/H circuit, as shown in Figure 4.9

During sample mode, the SOP behaves just like a regular op-amp, in which the value of the output follows the value of the input. During hold mode, the MOS transistors at the output node of the SOP are turned off while they are still operating in saturation, thus preventing any channel charge from flowing into the output of the SOP. In addition, the SOP is shut off and its output is held at high impedance, allowing the charge on Ch to be preserved throughout the hold mode. On the other hand, the output buffer of this S/H circuit is always operational during sample and hold mode and is always providing the voltage on Ch to the output of the S/H circuit.

S/H circuits that operate in closed loop configuration can achieve high resolution, but their requirements for high gain circuit block, such as an op-amp, limits the speed of the circuits. As a result, better and faster S/H circuits must be developed. 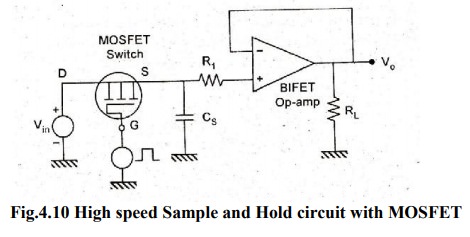 The above figure shows a sample and holds circuit with MOSFET as Switch acting as a sampling device and also consists of a holding capacitor Cs to store the sample values until the next sample comes in. This is a high speed circuit as it is apparent that CMOS switch has a very negligible propagation delay. 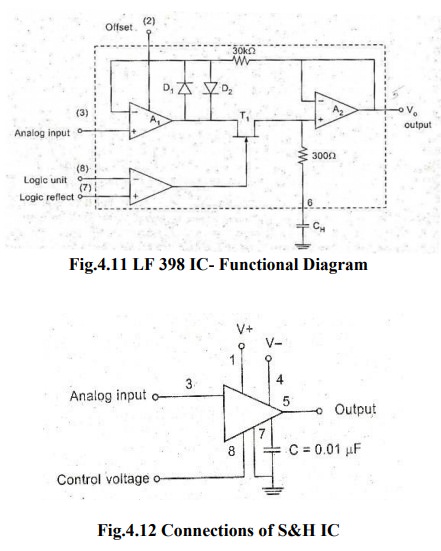