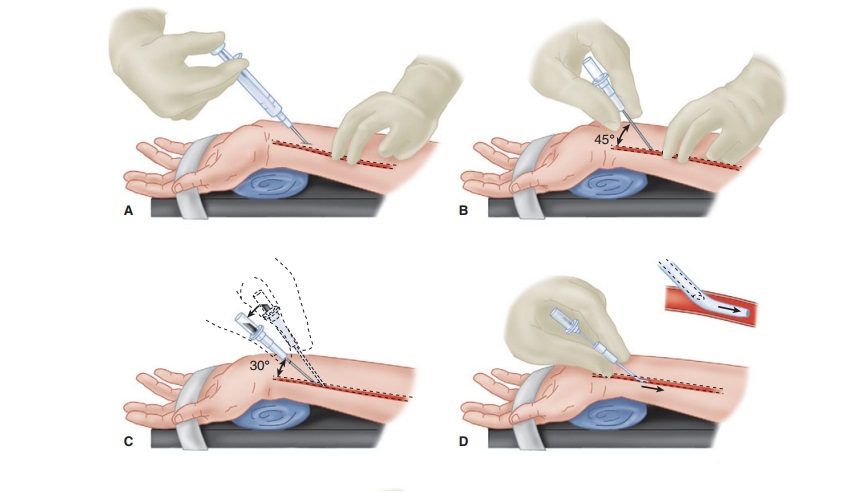 If possible, catheterization should be avoided in smaller end arteries with inadequate collateral blood flow or in extremities where there is a suspicion of preexisting vascular insufficiency.

A. Selection of Artery for Cannulation

The radial artery is commonly cannulated because of its superficial location and substantial collateral flow (in most patients the ulnar artery is larger than the radial and there are connections between the two via the palmar arches). Five percent of patients have incomplete palmar arches and lack adequate collateral blood flow. Allen’s test is a simple, but not reliable, method for assessing the safety of radial artery cannulation. In this test, the patient exsanguinates his or her hand by making a fist. While the operator occludes the radial and ulnar arteries with fingertip pressure, the patient relaxes the blanched hand. Collateral flow through the palmar arterial arch is confirmed by flushing of the thumb within 5 sec after pressure on the ulnar artery is released. Delayed return of normal color (5–10 s) indicates an equivocal test or insufficient collateral circulation (>10 s). The Allen’s test is of such questionable utility that many practitioners routinely avoid it. Alternatively, blood flow distal to the radial artery occlusion can be detected by palpation, Doppler probe, plethysmography, or pulse oximetry. Unlike Allen’s test, these methods of determining the adequacy of collateral circulation do not require patient cooperation.

The brachial artery is large and easily identifiable in the antecubital fossa. Its proximity to the aorta provides less waveform distortion. However, being near the elbow predisposes brachial artery catheters to kinking.

The femoral artery is prone to atheroma formation and pseudoaneurysm, but often provides an excellent access. The femoral site has been associated with an increased incidence of infectious complications and arterial thrombosis. Aseptic necrosis of the head of the femur is a rare, but tragic, complication of femoral artery cannulation in children.

The dorsalis pedis and posterior tibialarteries are some distance from the aorta andtherefore have the most distorted waveforms.

The axillary artery is surrounded by the axillary plexus, and nerve damage can result from a hematoma or traumatic cannulation. Air or thrombi can quickly gain access to the cerebral circulation during vigorous retrograde flushing of axillary artery catheters.

B. Technique of Radial Artery Cannulation

One technique of radial artery cannulation is illus-trated in Figure 5–7. Supination and extension of the wrist provide optimal exposure of the radial artery. The pressure–tubing–transducer system should be nearby and already flushed with saline to ensure easy and quick connection after cannula-tion. The radial pulse is palpated, and the artery’s course is determined by lightly pressing the tips of the index and middle fingers of the anesthesiolo-gist’s nondominant hand over the area of maximal impulse or by use of ultrasound. Using aseptic tech-nique, 1% lidocaine is infiltrated in the skin of awake patients, directly above the artery, with a small gauge needle. A larger gauge needle can then be used as a skin punch, facilitating entry of an 18-, 20-, or 22-gauge catheter over a needle through the skin at a 45° angle, directing it toward the point of palpation. Upon blood flashback, a guidewire may be advanced through the catheter into the artery and the cath-eter advanced over the guidewire. Alternatively, the needle is lowered to a 30° angle and advanced another 1–2 mm to make certain that the tip of the catheter is well into the vessel lumen. The catheter is advanced off the needle into the arterial lumen, after which the needle is withdrawn. Applying firm pressure over the artery proximal to the catheter tip, with the middle and ring fingertips, prevents blood from spurting from the catheter while the tubing is connected. Waterproof tape or suture can be used to hold the catheter in place. 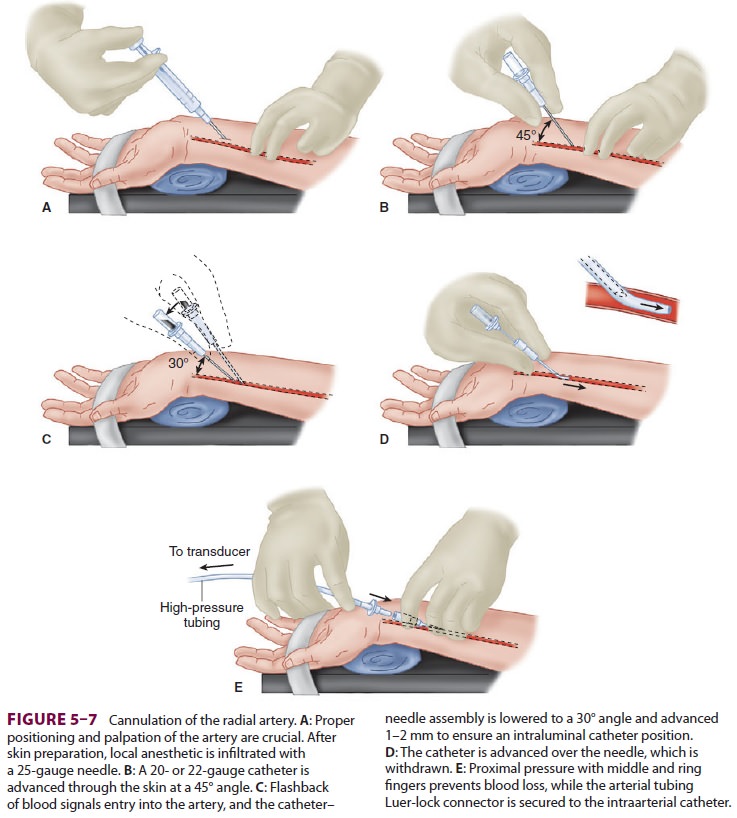 Complications of intraarterial monitoring include hematoma, bleeding (particularly with catheter tubing disconnections), vasospasm, arterial throm-bosis, embolization of air bubbles or thrombi, pseu-doaneurysm formation, necrosis of skin overlying the catheter, nerve damage, infection, necrosis of extremities or digits, and unintentional intraarterial drug injection. Factors associated with an increased rate of complications include prolonged cannula-tion, hyperlipidemia, repeated insertion attempts, female gender, extracorporeal circulation, the use of larger catheters in smaller vessels, and the use of vasopressors. The risks are minimized when the ratio of catheter to artery size is small, saline is continuously infused through the catheter at a rate of 2–3 mL/hr, flushing of the catheter is limited, and meticulous attention is paid to aseptic technique. Adequacy of perfusion can be continually moni-tored during radial artery cannulation by placing a pulse oximeter on an ipsilateral finger.

Because intraarterial cannulation allows continu-ous beat-to-beat blood pressure measurement, it is considered the optimal blood pressure monitoring technique. The quality of the transduced waveform, however, depends on the dynamic characteristics of

Most transducers have frequencies of several hundred Hz (>200 Hz for disposable transducers).The addition of tubing, stopcocks, and air in the line all decrease the frequency of the system. If the frequency response is too low, the system will be overdamped and will not faithfully reproduce the arterial waveform, underestimating the sys-tolic pressure. Underdamping is also a serious problem, leading to overshoot and a falsely high SBP.

Catheter–tubing–transducer systems must also prevent hyperresonance, an artifact caused by reverberation of pressure waves within the system. A damping coefficient (β) of 0.6–0.7 is optimal. The natural frequency and damping coefficient can be determined by examining tracing oscillations after a high-pressure flush (Figure 5–10). 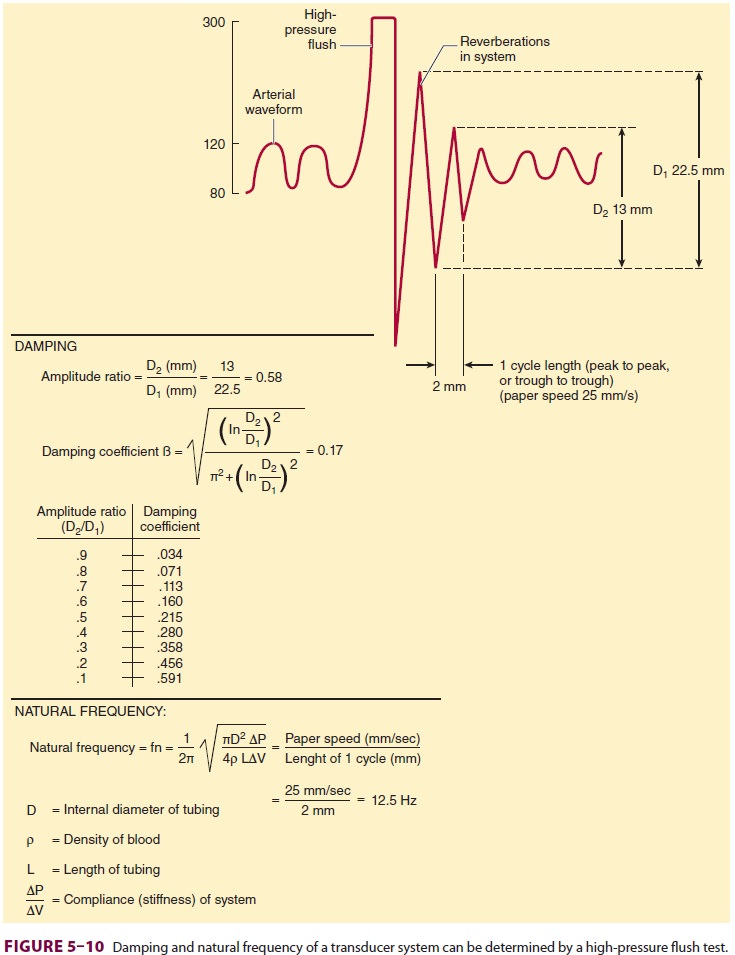 Pressure transducers have evolved from bulky, reusable instruments to miniaturized, disposable devices. Transducers contain a diaphragm that is distorted by an arterial pressure wave. The mechani-cal energy of a pressure wave is converted into an electric signal. Most transducers are resistance types that are based on the strain gauge principle: stretch-ing a wire or silicone crystal changes its electrical resistance. The sensing elements are arranged as a “Wheatstone bridge” circuit so that the voltage out-put is proportionate to the pressure applied to the diaphragm (Figure 5–11). 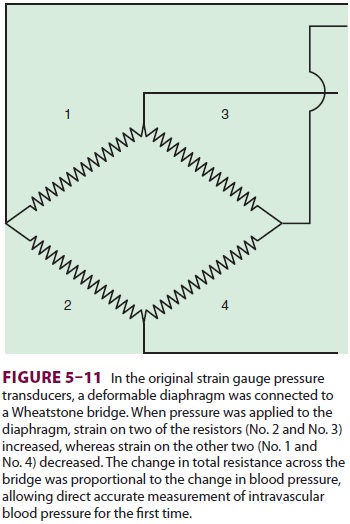 Transducer accuracy depends on correct cali-bration and zeroing procedures. A stopcock at the level of the desired point of measurement—usually the midaxillary line—is opened, and the zero trigger on the monitor is activated. If the patient’s position is altered by raising or lowering the operating table, the transducer must either be moved in tandem or zeroed to the new level of the midaxillary line. In a seated patient, the arterial pressure in the brain dif-fers significantly from left ventricular pressure. In this circumstance, cerebral pressure is determined by setting the transducer to zero at the level of the ear, which approximates the circle of Willis. The trans-ducer’s zero should be checked regularly, as some transducer measurements can “drift” over time.

Digital readouts of systolic and diastolic pres-sures are a running average of the highest and lowest measurements within a certain time interval. Because motion or cautery artifacts can result in some very misleading numbers, the arterial waveform should always be monitored. The shape of the arterial wave provides clues to several hemodynamic variables. The rate of upstroke indicates contractility, the rate of downstroke indicates peripheral vascular resistance, and exaggerated variations in size during the respiratory cycle suggest hypovolemia. MAP is calculated by integrating the area under the pressure curve.

Intraarterial catheters also provide access for intermittent arterial blood gas sampling and analysis. The development of fiberoptic sensors that can be inserted through a 20-gauge arterial catheter enables continuous blood gas monitoring. Unfortunately, these sensors are quite expensive and are often inaccurate, so they are rarely used. Analysis of the arterial pressure waveform allows for estimation of cardiac output (CO) and other hemodynamic parameters. These devices are discussed in the section on CO monitoring.