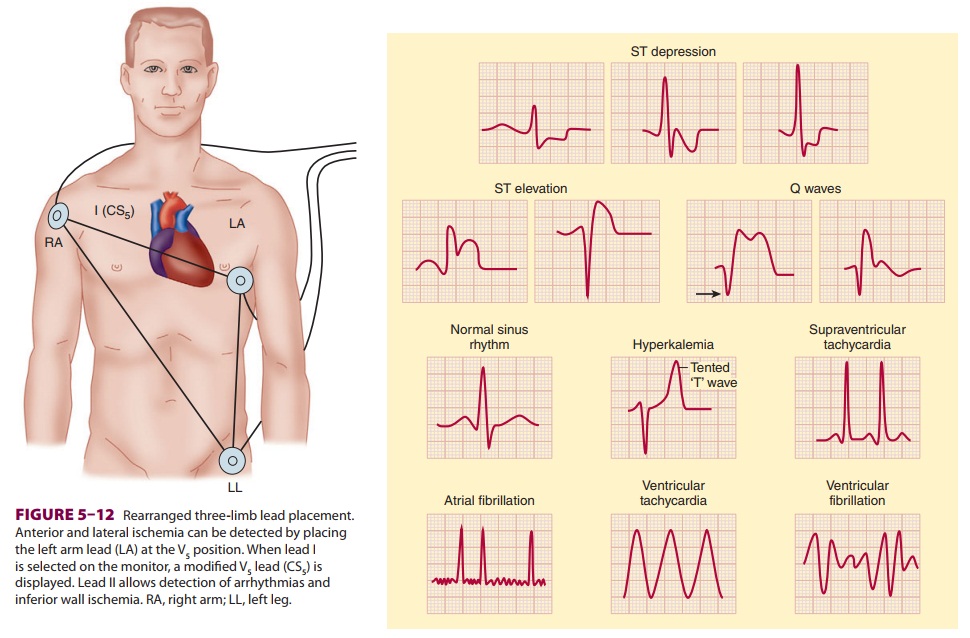 All patients should have intraoperative monitor-ing of their electrocardiogram (ECG). There are no contraindications.

All patients should have intraoperative monitor-ing of their electrocardiogram (ECG). There are no contraindications.

Lead selection determines the diagnostic sensitivity of the ECG. ECG leads are positioned on the chest and extremities to provide different perspectives of the electrical potentials generated by the heart. At the end of diastole, the atria contract, which pro-vides the atrial contribution to CO, generating the “P” wave. Following atrial contraction, the ven-tricle is loaded awaiting systole. The QRS complex begins the electrical activity of systole following the 120–200 msec atrioventricular (AV) nodal delay. Depolarization of the ventricle proceeds from the AV node through the interventricular system via the His–Purkinje fibers. The normal QRS lasts approxi-mately 120 msec, which can be prolonged in patients with cardiomyopathies and heart failure. The T wave represents repolarization as the heart prepares to contract again. Prolongation of the QT interval sec-ondary to electrolyte imbalances or drug effects can potentially lead to life-threatening arrhythmias (les torsade de pointes).

The electrical axis of lead II is approximately 60° from the right arm to the left leg, which is parallel to the electrical axis of the atria, resulting in the larg-est P-wave voltages of any surface lead. This orienta-tion enhances the diagnosis of arrhythmias and the detection of inferior wall ischemia. Lead V 5 lies over the fifth intercostal space at the anterior axillary line; this position is a good compromise for detecting anterior and lateral wall ischemia. A true V5 lead is possible only on operating room ECGs with at least five lead wires, but a modified V 5 can be monitored by rearranging the standard three-limb lead place-ment (Figure 5–12). Ideally, because each lead pro-vides unique information, leads II and V5 should be monitored simultaneously. If only a single-channel machine is available, the preferred lead for monitor-ing depends on the location of any prior infarction or ischemia. Esophageal leads are even better than lead II for arrhythmia diagnosis, but have not yet gained general acceptance in the operating room.

Electrodes are placed on the patient’s body to monitor the ECG (Figure 5–13). Conductive gel lowers the skin’s electrical resistance, which can be further decreased by cleansing the site with alco-hol. Needle electrodes are used only if the disks are unsuitable (eg, with an extensively burned patient). 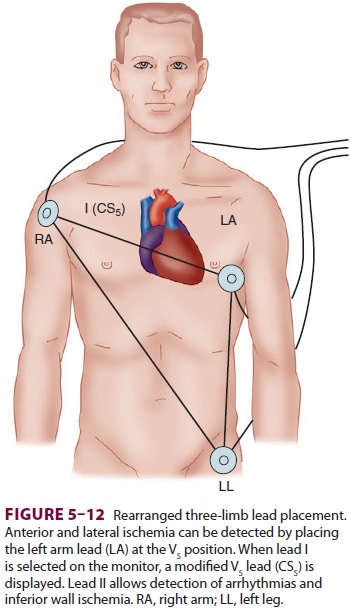 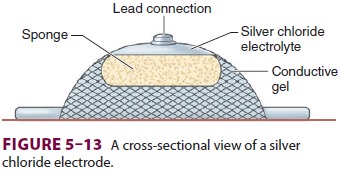 The ECG is a recording of the electrical poten-tials generated by myocardial cells. Its routine use allows arrhythmias, myocardial ischemia, 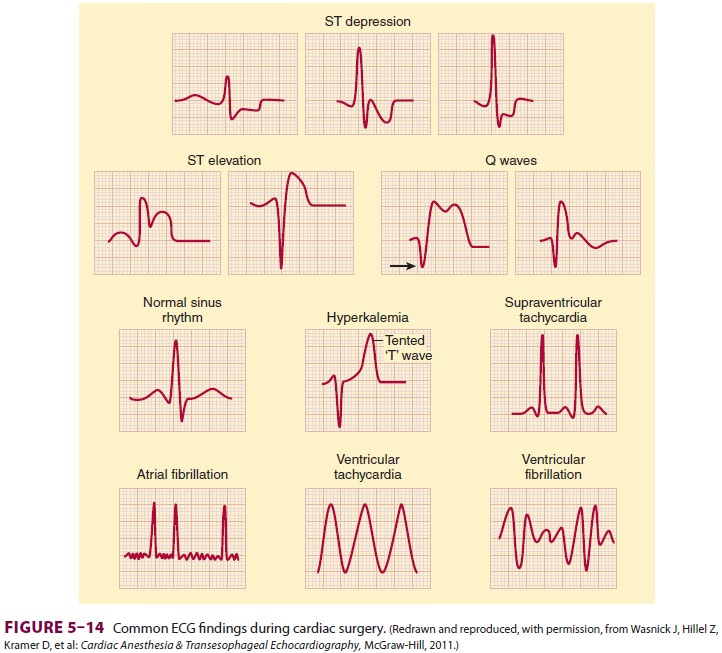 conduction abnormalities, pacemaker malfunc-tion, and electrolyte disturbances to be detected (Figure 5–14). Because of the small voltage poten-tials being measured, artifacts remain a major problem. Patient or lead-wire movement, use of electrocautery, 60-cycle interference from nearby alternating current devices, and faulty electrodes can simulate arrhythmias. Monitoring filters incor-porated into the amplifier to reduce “motion” arti-facts will lead to distortion of the ST segment and may impede the diagnosis of ischemia. Digital readouts of the heart rate (HR) may be misleading because of monitor misinterpretation of artifacts or large T waves—often seen in pediatric patients—as QRS complexes.Depending on equipment availability, a pre-induction rhythm strip can be printed or frozen on the monitor’s screen to compare with intraop-erative tracings. To interpret ST-segment changes properly, the ECG must be standardized so that a 1-mV signal results in a deflection of 10 mm on a standard strip monitor. Newer units continuously analyze ST segments for early detection of myo-cardial ischemia. Automated ST-segment analysis increases the sensitivity of ischemia detection, does not require additional physician skill or vigilance,and may help diagnose intraoperative myocardial ischemia.

Commonly accepted criteria for diagnos-ing myocardial ischemia require that the ECG be recorded in “diagnostic mode” and include a flat or downsloping ST-segment depression exceed-ing 1 mm, 80 msec after the J point (the end of the QRS complex), particularly in conjunction with T-wave inversion. ST-segment elevation with peaked T waves can also represent ischemia. Wolff– Parkinson–White syndrome, bundle-branch blocks, extrinsic pacemaker capture, and digoxin therapy may preclude the use of ST-segment information. The audible beep associated with each QRS complex should be loud enough to detect rate and rhythm changes when the anesthesiologist’s visual attention is directed elsewhere. Some ECGs are capable of storing aberrant QRS complexes for further analysis, and some can even interpret and diagnose arrhyth-mias. The interference caused by electrocautery units, however, has limited the usefulness of auto-mated arrhythmia analysis in the operating room.