The loop invariant is true in four crucial points in a loop.

Example 8.5. Design an iterative algorithm to compute an. Let us name the algorithm power(a, n). For example,

The specification and the loop invariant are shown as comments.

--inputs: n is a positive integer

while i ≠ n

The step by step execution of power (2, 5) is shown in Table 8.1. Each row shows the values of the two variables p and i at the end of an iteration, and how they are calculated. We see that p = ai is true at the start of the loop, and remains true in each row. Therefore, it is a loop invariant. 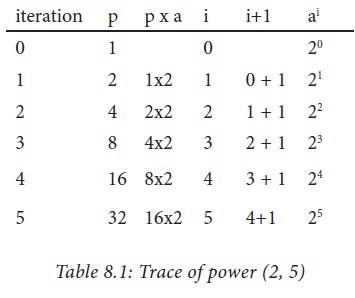 Example 8.6. Recall the Chocolate bar problem of Example 1.11. How many cuts are needed to break the bar into its individual squares? 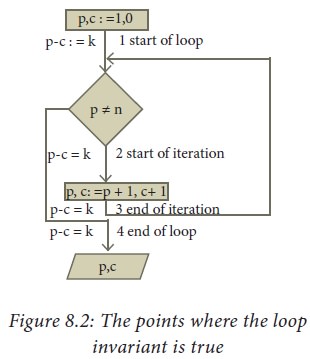 Example 8.7. There are 6 equally spaced trees and 6 sparrows sitting on these trees,one sparrow on each tree. If a sparrow flies from one tree to another, then at the same time, another sparrow flies from its tree to some other tree the same distance away, but in the opposite direction. Is it possible for all the sparrows to gather on one tree?

Let us index the trees from 1 to 6. The index of a sparrow is the index of the tree it is currently sitting on. A pair of sparrows flying can be modeled as an iterative step of a loop. When a sparrow at tree i flies to tree i + d, another sparrow at tree j flies to tree j — d. Thus, after each iterative step, the sum S of the indices of the sparrows remains invariant. Moreover, a loop invariant is true at the start and at the end of the loop.

At the start of the loop, the value of the invariant is 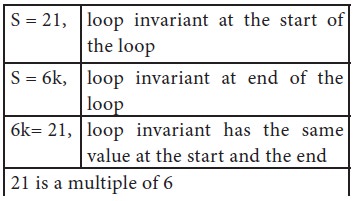 Example 8.8. Consider the Chameleons of Chromeland of Example 6.3. There are 13 red, 15 green, and 17 blue chameleons on Chromeland. When two chameleons of different colors meet they both change their color to the third one (for example, if a red and a green meet, both become blue). Is it possible to arrange meetings that result in all chameleons displaying blue color?

The difference in the numbers of any two types either do not change or changes by 3. This is an invariant.

No two colors differ in number by a multiple of 3. Therefore, all the chameleons cannot be changed to a single color.

Example 8.9. Jar of marbles: You are given a jar full of two kinds of marbles, white and black, and asked to play this game. Randomly select two marbles from the jar. If they are the same color, throw them out, but put another black marble in (you may assume that you have an endless supply of spare marbles). If they are different colors, place the white one back into the jar and throw the black one away. If you knew the original numbers of white and black marbles, what is the color of the last marble in the jar? 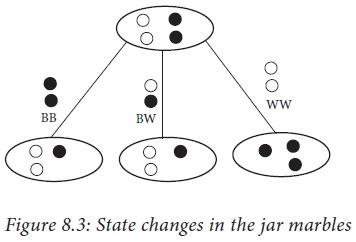 The number of white and black marbles in the jar can be represented by two variables w and b. In each iterative step, b and w change depending on the colors of the two marbles taken out: Black Black, Black White or White White. It is illustrated in Figure 8.3 and annotated in the algorithm below.

1 while at least two marbles in jar

3 take out any two marbles

5throw away both the marbles

6put a black marble back

9 throw away both the marbles

10 put a black marble back

13 throw away the black one

14 put the white one back

For each case, how b, w and b+w change is shown in the algorithm, where b' and w' are values of the variables before taking out two marbles. Notice the way w changes. Either it does not change, or decreases by 2. This means that the parity of w, whether it is odd or even, does not change. The parity of w is invariant.

Suppose, at the start of the game, w is even. When the game ends, w is still even. Moreover, only one marble is left, w+b = 1.

3 w is even loop invariant

One last question: do we ever reach a state with only one marble? Yes, because the total number of marbles b+w always decreases by one at each step, it will eventually become 1.