Intrusion: type of attack on information assets in which instigator attempts to gain entry into or disrupt system with harmful intent

Intrusion prevention: consists of activities that seek to deter an intrusion from occurring

Detects a violation of its configuration and activates alarm

The failure of an IDS system to react to an actual attack event.

All IDSs use one of two detection methods:

Widely used because many attacks have clear and distinct signatures

Problem with this approach is that as new attack strategies are identified, the IDS’s database of signatures must be continually updated

When measured activity is outside baseline parameters or clipping level, IDS will trigger an alert

Requires much more overhead and processing capacity than signature-based

May generate many false positives 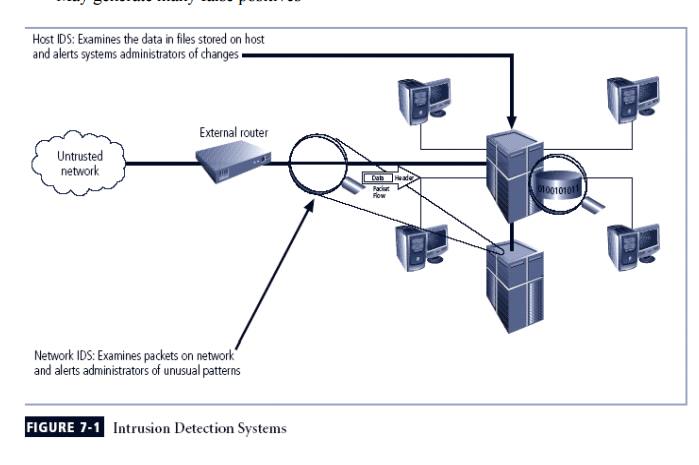 Resides on computer or appliance connected to segment of an organization’s network; looks for signs of attacks

When examining packets, a NIDS looks for attack patterns

To detect an attack, NIDSs look for attack patterns

In application protocol verification, higher-order protocols are examined for unexpected packet behavior or improper use

Advantages and Disadvantages of NIDSs

Can become overwhelmed by network volume and fail to recognize attacks

Cannot reliably ascertain if attack was successful or not

Some forms of attack are not easily discerned by NIDSs, specifically those involving fragmented packets

Benchmark and monitor the status of key system files and detect when intruder creates, modifies, or deletes files

Most HIDSs work on the principle of configuration or change management

Advantage over NIDS: can usually be installed so that it can access information encrypted when traveling over network

Advantages and Disadvantages of HIDSs

Functions on host system, where encrypted traffic will have been decrypted and is available for processing

Not affected by use of switched network protocols

Vulnerable both to direct attacks and attacks against host operating system

Does not detect multi-host scanning, nor scanning of non-host network devices

Susceptible to some denial-of-service attacks

Can use large amounts of disk space

Can inflict a performance overhead on its host systems

AppIDS may be configured to intercept requests:

Advantages and Disadvantages of AppIDSs

Aware of specific users; can observe interaction between application and user

Able to operate even when incoming data is encrypted

May be taken in by forms of spoofing

What is your systems environment?

What are your security goals and objectives?

What are requirements that are levied from outside the organization?

What are your organization’s resource constraints?

Centralized: all IDS control functions are implemented and managed in a central location

Fully distributed: all control functions are applied at the physical location of each IDS component

Partially distributed: combines the two; while individual agents can still analyze and respond to local threats, they report to a hierarchical central facility to enable organization to detect widespread attacks 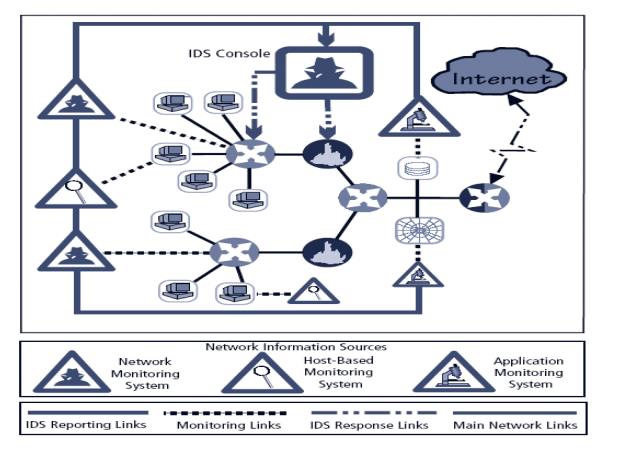 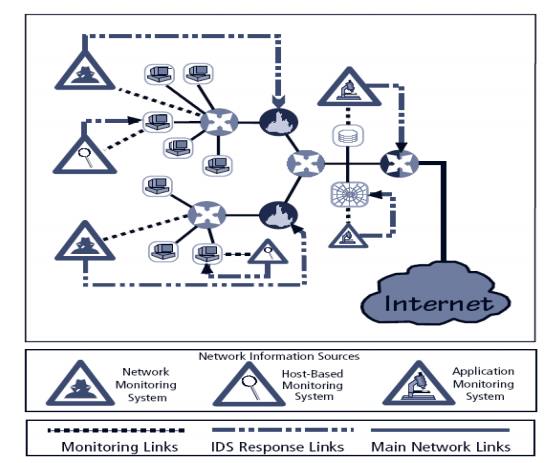 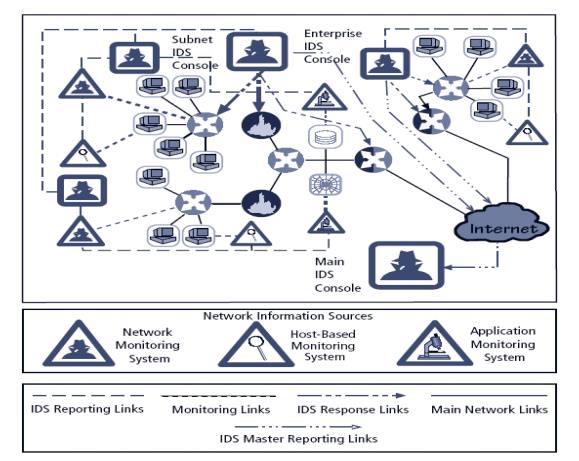 Like decision regarding control strategies, decisions about where to locate elements of intrusion detection systems can be art in itself

Planners must select deployment strategy based on careful analysis of organization’s information security requirements but, at the same time, causes minimal impact

Location 1: behind each external firewall, in the network DMZ

Location 2: outside an external firewall 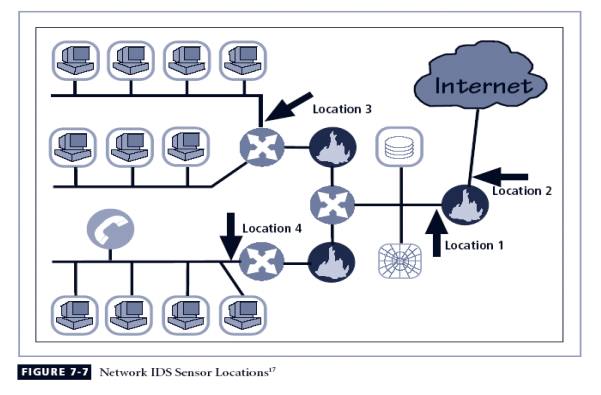 Proper implementation of HIDSs can be painstaking and time-consuming task

Installation continues until either all systems are installed, or the organization reaches planned degree of coverage it is willing to live with

Measuring the Effectiveness of IDSs

Administrators examine the level of use at which IDSs fail

Evaluation of IDS might read: at 100 Mb/s, IDS was able to detect 97% of directed attacks

Since developing this collection can be tedious, most IDS vendors provide testing mechanisms that verify systems are performing as expected

Some of these testing processes will enable the administrator to:

Record and retransmit packets from real virus or worm scan

Conduct a real virus or worm scan against an invulnerable system

Honey pots: decoy systems designed to lure potential attackers away from critical systems and encourage attacks against the themselves

Encourage attacker to stay on system long enough for administrators to document event and, perhaps, respond 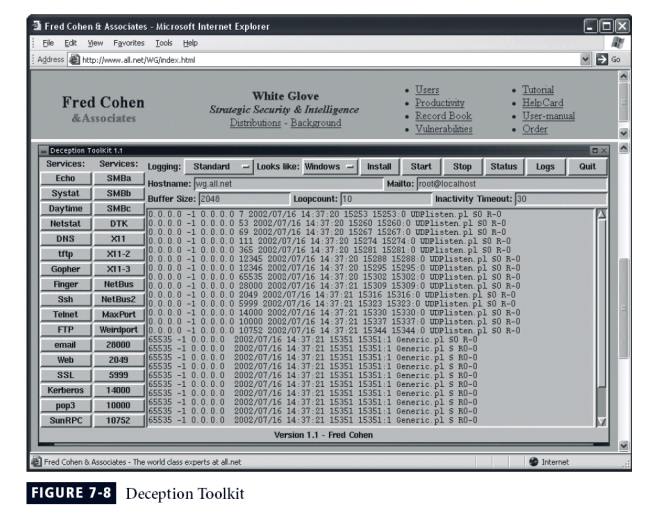 Padded cell: honey pot that has been protected so it cannot be easily compromised

In addition to attracting attackers with tempting data, a padded cell operates in tandem with a traditional IDS

When the IDS detects attackers, it seamlessly transfers them to a special simulated environment where they can cause no harm—the nature of this host environment is what gives approach the name padded cell

Attackers can be diverted to targets they cannot damage

Administrators have time to decide how to respond to attacker

Attackers’ actions can be easily and more extensively monitored, and records can be used to refine threat models and improve system protections

Legal implications of using such devices are not well defined

Expert attacker, once diverted into a decoy system, may become angry and launch a more hostile attack against an organization’s systems

Legal drawbacks to trap and trace

Enticement: process of attracting attention to system by placing tantalizing bits of information in key locations

Entrapment: action of luring an individual into committing a crime to get a conviction.

Enticement is legal and ethical, whereas entrapment is not