The third component of information security is availability. The information created and stored by an organization needs to be available to authorized users and applications. Information is useless if it is not available. Information needs to be changed constantly, which means that it must be accessible to those authorized to access it. Unavailability of information is just as harmful to an organization as a lack of confidentiality or integrity. Imagine what would happen to a bank if the customers could not access their accounts for transactions.

The three goals of security—confidentiality, integrity and availability—can be threatened by security attacks. Figure relates the taxonomy of attack types to security goals. 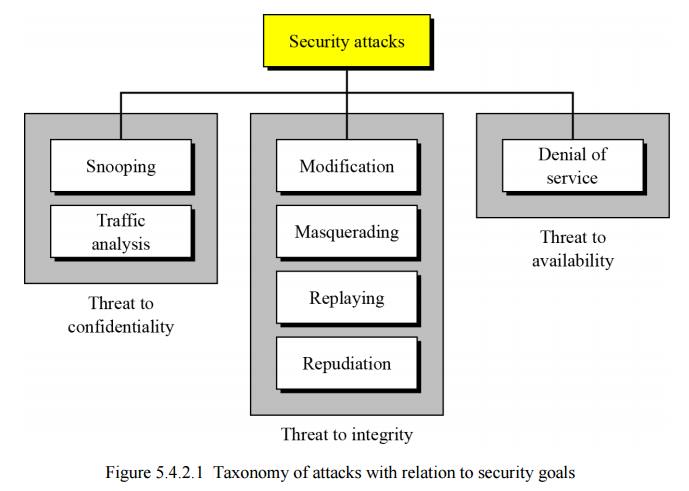 In general, two types of attack threaten the confidentiality of information: snooping and traffic analysis. Snooping refers to unauthorized access to or interception of data. Traffic analysis refers other types of information collected by an intruder by monitoring online traffic.

The integrity of data can be threatened by several kinds of attack: modification, masquerading, replaying and repudiation.

Denial of service (DoS) attacks may slow down or totally interrupt the service of a system. The attacker can use several strategies to achieve this. They might make the system so busy that it collapses, or they might intercept messages sent in one direction and make the sending system believe that one of the parties involved in the communication or message has lost the message and that it should be resent.

Standards have been defined for security services to achieve security goals and prevent security attacks. Figure 16.3 shows the taxonomy of the five common services.

The actual implementation of security goals needs some help from mathematics. Two techniques are prevalent today: one is very general—cryptography—and one is specific—steganography.

The word steganography, with its origin in Greek, means “covered writing”, in contrast to cryptography, which means

Figure 16.4 shows the general idea behind symmetric-key cryptography. Alice can send a message to Bob over an insecure channel with the assumption that an adversary, Eve, cannot understand the contents of the message by simply eavesdropping on the channel. 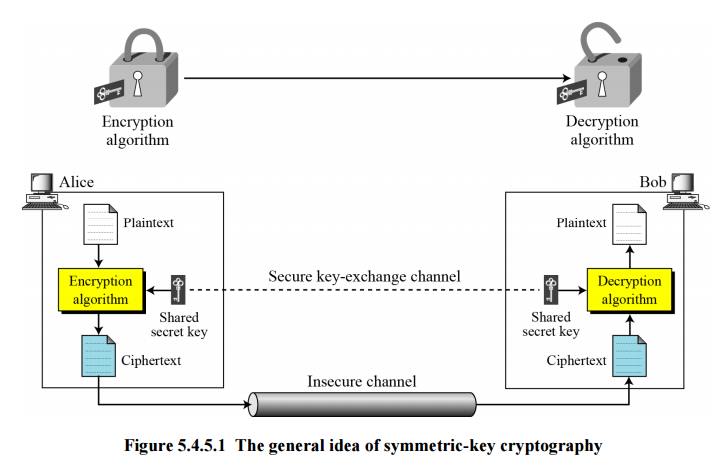 A substitution cipher replaces one symbol with another. If the symbols in the plaintext are alphabetic characters, we replace one character with another.

ü Use the additive cipher with key = 15 to encrypt the message “hello”.

ü We apply the encryption algorithm to the plaintext, character by character:

ü The ciphertext is therefore “wtaad”.

Alice needs to send the message “Enemy attacks tonight” to Bob. Alice and Bob have agreed to divide the text into groups of five characters and then permute the characters in each group. The following shows the grouping after adding a bogus character (z) at the end to make the last group the same size as the others.

The key used for encryption and decryption is a permutation key, which shows how the character are permuted. For this message, assume that Alice and Bob used the following key:

Alice sends the ciphertext “eemyntaacttkonshitzg” to Bob. Bob divides the ciphertext into five-character groups and, using the key in the reverse order, finds the plaintext.

Since traditional ciphers are no longer secure, modern symmetric-key ciphers have been developed during the last few decades. Modern ciphers normally use a combination of substitution, transposition and some other complex transformations to create a ciphertext from a plaintext. Modern ciphers are bit-oriented (instead of character-oriented). The plaintext, ciphertext and the key are strings of bits. In this section we briefly discuss two examples of modern symmetric-key ciphers: DES and AES. The coverage of these two ciphers is short: interested readers can consult the references at the end of the chapter for more details.

The Advanced Encryption Standard (AES) is a symmetric-key block cipher published by the US National Institute of Standards and Technology (NIST) in 2001 in response to the shortcoming of DES, for example its small key size. See Figure 16.6.

Both symmetric-key and asymmetric-key cryptography will continue to exist in parallel. We believe that they are complements of each other: the advantages of one can compensate for the disadvantages of the other.

The number of secrets

Symmetric-key cryptography is based on sharing secrecy;

asymmetric-key cryptography is based on personal secrecy.

A need for both systems

In symmetric-key cryptography, symbols are permuted or substituted:

in asymmetric-key cryptography, numbers are manipulated.