TESTS BASED ON SAMPLING DISTRIBUTIONS – II

Sir Ronald Aylmer Fisher (1890–1962) was a British statistician and geneticist. His work in statistics, made him popularly known as “a genius who almost single-handedly created the foundations for modern statistical science” and “the single most important figure in 20th century Statistics”. In genetics, his work used Mathematics to combine Mendelian Genetics and natural selection and this contributed to the revival of Darwinism in the early 20th century revision of the Theory of Evolution. 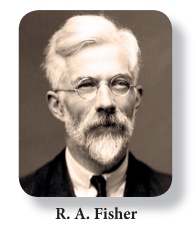 “The analysis of variance is not a mathematical theorem, but rather a convenient method of arranging the arithmetic”

The students will be able to compare variances of two populations

·              understand the testing of hypothesis for comparing three or more population means.