We begin by describing a database and defining terminology related to its use. We draw on examples from what is called the relational database because it is one of the most widely used types.

We begin by describing a database and defining terminology related to its use. We draw on examples from what is called the relational database because it is one of the most widely used types. However, all the concepts described here apply to any type of database. We first define the basic concepts and then use them to discuss security concerns.

Concept of a Database

A database is a collection of data and a set of rules that organize the data by specifying certain relationships among the data. Through these rules, the user describes a logical format for the data. The data items are stored in a file, but the precise physical format of the file is of no concern to the user. A database administrator is a person who defines the rules that organize the data and also controls who should have access to what parts of the data. The user interacts with the database through a program called a database manager or a database management system (DBMS), informally known as a front end.

Not every database is easily represented as a single, compact table. The database in Figure 6-1 logically consists of three files with possibly different uses. These three files could be represented as one large table, but that depiction may not improve the utility of or access to the data. 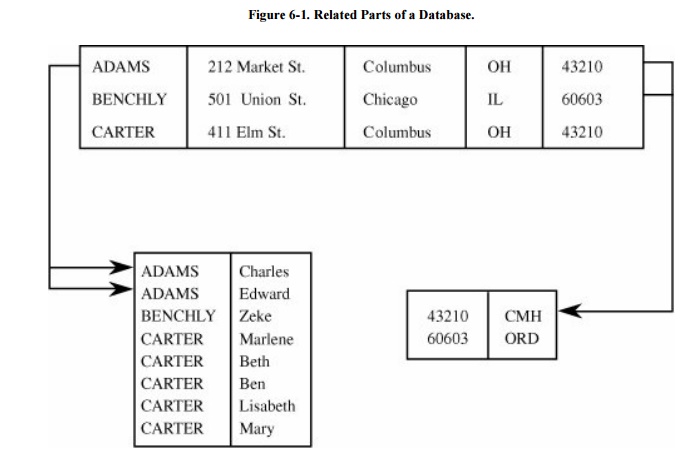 The logical structure of a database is called a schema. A particular user may have access to only part of the database, called a subschema. The overall schema of the database in Figure 6-1 is detailed in Table 6-2. The three separate blocks of the figure are examples of subschemas, although other subschemas of this database can be defined. We can use schemas and subschemas to present to users only those elements they wish or need to see. For example, if Table 6 -1 represents the employees at a company, the subschema on the lower left can list employee names without revealing personal information such as home address.

The rules of a database identify the columns with names. The name of each column is called an attribute of the database. A relation is a set of columns. For example, using the database in Table 6-2, we see that NAMEZIP is a relation formed by taking the NAME and ZIP columns, as shown in Table 6-3. The relation specifies clusters of related data values in much the same way that the relation "mother of" specifies a relationship among pairs of humans. In this example, each cluster contains a pair of elements, a NAME and a ZIP. Other relations can have more columns, so each cluster may be a triple, a 4-tuple, or an n-tuple (for some value n) of elements.

Users interact with database managers through commands to the DBMS that retrieve, modify, add, or delete fields and records of the database. A command is called a query. Database management systems have precise rules of syntax for queries. Most query languages use an English-like notation, and many are based on SQL, a structured query language originally developed by IBM. We have written the example queries in this chapter to resemble English sentences so that they are easy to understand. For example, the query

retrieves all records having the value ADAMS in the NAME field.

The result of executing a query is a subschema. One way to form a subschema of a database is by selecting records meeting certain conditions. For example, we might select records in which ZIP=43210, producing the result shown in Table 6-4.

After having selected records, we may project these records onto one or more attributes. The select operation identifies certain rows from the database, and a project operation extracts the values from certain fields (columns) of those records. The result of a select-project operation is the set of values of specified attributes for the selected records. For example, we might select records meeting the condition ZIP=43210 and project the results onto the attributes NAME and FIRST, as in Table 6-5. The result is the list of first and last names of people whose addresses have zip code 43210.

Notice that we do not have to project onto the same attribute(s) on which the selection is done. For example, we can build a query using ZIP and NAME but project the result onto FIRST: 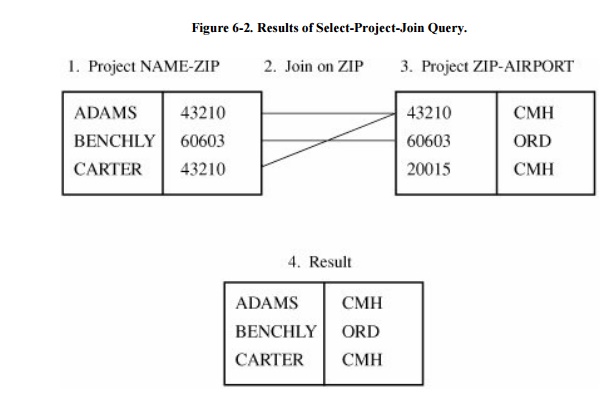 The logical idea behind a database is this: A database is a single collection of data, stored and maintained at one central location, to which many people have access as needed. However, the actual implementation may involve some other physical storage arrangement or access. The essence of a good database is that the users are unaware of the physical arrangements; the unified logical arrangement is all they see. As a result, a database offers many advantages over a simple file system:

z     shared access, so that many users can use one common, centralized set of data

minimal redundancy, so that individual users do not have to collect and maintain their own sets of data

data consistency, so that a change to a data value affects all users of the data value

data integrity, so that data values are protected against accidental or malicious undesirable changes

controlled access, so that only authorized users are allowed to view or to modify data values

A DBMS is designed to provide these advantages efficiently. However, as often happens, the objectives can conflict with each other. In particular, as we shall see, security interests can conflict with performance. This clash is not surprising because measures taken to enforce security often increase the computing system's size or complexity. What is surprising, though, is that security interests may also reduce the system's ability to provide data to users by limiting certain queries that would otherwise seem innocuous.