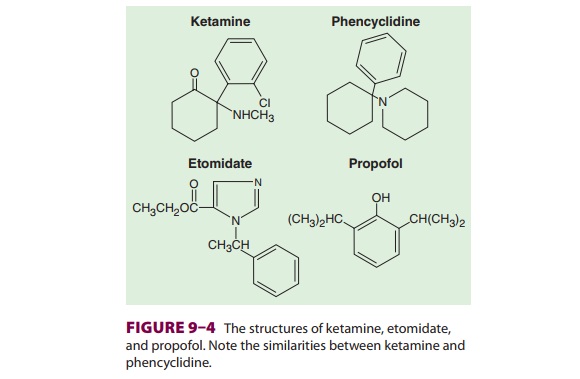 Ketamine has multiple effects throughout the cen-tral nervous system, inhibiting polysynaptic reflexes in the spinal cord as well as excitatory neurotrans-mitter effects in selected areas of the brain.

Ketamine has multiple effects throughout the cen-tral nervous system, inhibiting polysynaptic reflexes in the spinal cord as well as excitatory neurotrans-mitter effects in selected areas of the brain. In con-trast to the depression of the reticular activating system induced by the barbiturates, ketamine func-tionally “dissociates” the thalamus (which relays sensory impulses from the reticular activating sys-tem to the cerebral cortex) from the limbic cortex (which is involved with the awareness of sensation). Clinically, this state of dissociative anesthesia may cause the patient to appear conscious (eg, eye open-ing, swallowing, muscle contracture) but unable to process or respond to sensory input. Ketamine has been demonstrated to be an N-methyl-d-aspartate (NMDA) receptor (a subtype of the glutamate recep-tor) antagonist.

Ketamine (Figure 9–4) is a structural ana-logue of phencyclidine (an anesthetic that has been used in veterinary medicine, and a drug of abuse). It is one-tenth as potent, yet retains many 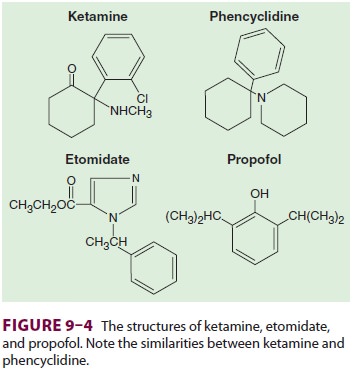 of phencyclidine’s psychotomimetic effects. Ket-amine is used for intravenous induction of anes-thesia, particularly in settings where its tendency to produce sympathetic stimulation are useful (hypovolemia, trauma). When intravenous access is lacking, ketamine is useful for intramuscular induction of general anesthesia in children and uncooperative adults. Ketamine can be combined with other agents (eg, propofol or midazolam) in small bolus doses or infusions for deep conscious sedation during nerve blocks, endoscopy, etc. Even subanesthetic doses of ketamine may cause hallu-cinogenic effects but usually do not do so in clinical practice, where many patients will have received at least a small dose of midazolam (or a related agent) for amnesia and sedation. The increased anesthetic potency and decreased psychotomi-metic side effects of one isomer (S[+] versus R[–]) are the result of stereospecific receptors. The single S(+) stereoisomer preparation is not available in the United States (but widely available throughout the world), and it has considerably greater affinity than the racemic mixture for the NMDA receptor as well as several-fold greater potency as a general anesthetic.

Ketamine has been administered orally, nasally, rec-tally, subcutaneously, and epidurally, but in usual clinical practice it is given intravenously or intra-muscularly (Table 9–3). Peak plasma levels are usu-ally achieved within 10–15 min after intramuscular injection. 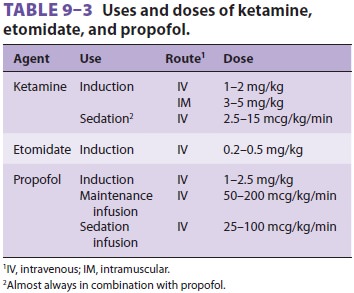 Ketamine is more lipid soluble and less protein bound than thiopental. These characteristics, along with ketamine-induced increase in cere-bral blood flow and cardiac output, lead to rapid brain uptake and subsequent redistribution (the distribution half-life is 10–15 min). Awakening is due to redistribution from brain to peripheral compartments.

Ketamine is biotransformed in the liver to several metabolites, one of which (norketamine) retains anesthetic activity. Induction of hepatic enzymes only partially explains the tolerance that patients who receive multiple doses of ketamine will develop. Extensive hepatic uptake (hepatic extraction ratio of 0.9) explains ketamine’s relatively short elimination half-life (2 h).

In contrast to other anesthetic agents, ket-amine increases arterial blood pressure, heartrate, and cardiac output (Table 9–4), particularly after rapid bolus injections. These indirect cardio-vascular effects are due to central stimulation of the sympathetic nervous system and inhibition of the reuptake of norepinephrine after release at nerve terminals. Accompanying these changes are increases in pulmonary artery pressure and myocardial work. For these reasons, large bolus injections of ketamine should be administered cautiously in patients with coronary artery dis-ease, uncontrolled hypertension, congestive heart failure, or arterial aneurysms. The direct myocar-dial depressant effects of large doses of ketamine,probably due to inhibition of calcium transients, are unmasked by sympathetic blockade (eg, spinal cord transection) or exhaustion of catecholamine stores (eg, severe end-stage shock). On the other hand, ketamine’s indirect stimulatory effects may be beneficial to patients with acute shock. 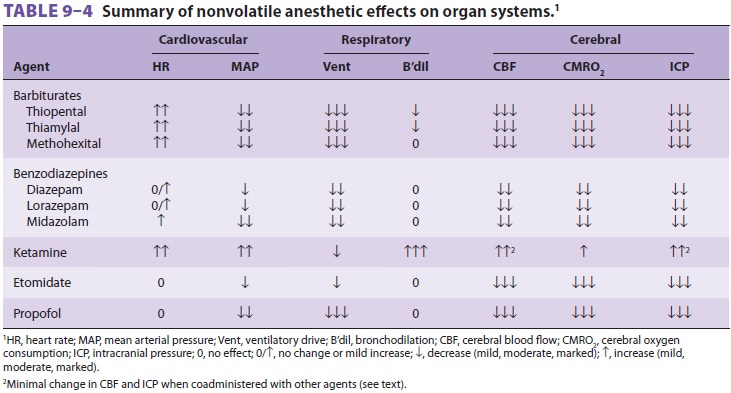 Ventilatory drive is minimally affected by induction doses of ketamine, although rapid intravenous bolus administration or combinations of ketamine with opioids occasionally produce apnea. Racemic ket-amine is a potent bronchodilator, making it a good induction agent for asthmatic patients; however, S(+) ketamine produces minimal bronchodilation. Upper airway reflexes remain largely intact, but par-tial airway obstruction may occur, and patients at increased risk for aspiration pneumonia (“full stom-achs”) should be intubated during ketamine general anesthesia. The increased salivation associated with ketamine can be attenuated by premedication with an anticholinergic agent such as glycopyrrolate

The received dogma about ketamine is that it increases cerebral oxygen consumption, cerebral blood flow, and intracranial pressure. These effects would seem to preclude its use in patients with space-occupying intracranial lesions such as occur with head trauma; however, recent publications offer convincing evidence that when combined with a benzodiazepine (or another agent acting on the same GABA receptor system) and controlled ventilation, but not with nitrous oxide, ketamine is not associated with increased intracranial pres-sure. Myoclonic activity is associated with increased subcortical electrical activity, which is not apparent on surface EEG. Undesirable psychotomimetic side effects (eg, disturbing dreams and delirium) dur-ing emergence and recovery are less common in children and in patients premedicated with benzo-diazepines or those in whom ketamine is combined with propofol in a TIVA technique. Of the nonvola-tile agents, ketamine comes closest to being a “com-plete” anesthetic as it induces analgesia, amnesia, and unconsciousness.

Ketamine interacts synergistically (more than addi-tive) with volatile anesthetics but in an additive way with propofol, benzodiazepines, and other GABA-receptor–mediated agents. In animal experi-ments nondepolarizing neuromuscular blocking agents are minimally potentiated by ketamine . Diazepam and midazolam attenuate ketamine’s cardiostimulatory effects and diazepam prolongs ketamine’s elimination half-life. α-Adrenergic and β-adrenergic antagonists(and other agents and techniques that diminish sympathetic stimulation) unmask the direct myo-cardial depressant effects of ketamine, which are normally overwhelmed by sympathetic stimulation. Concurrent infusion of ketamine and propofol, often in a fixed infusion rate ratio of 1:10, has achieved great popularity for sedation with local and regional anesthesia, particularly in office-based settings.