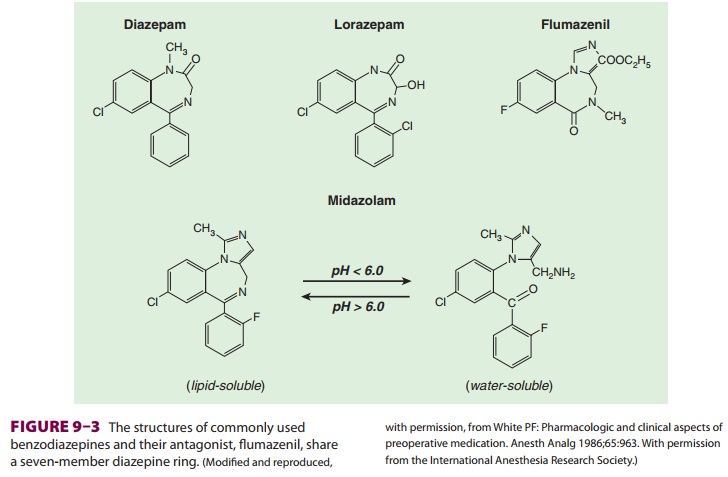 Benzodiazepines bind the same set of receptors in the central nervous system as barbiturates but bind to a different site on the receptors.

The chemical structure of benzodiazepines includes a benzene ring and a seven-member diazepine ring (Figure 9–3). Substitutions at various positions on these rings affect potency and biotransformation. The imidazole ring of midazolam contributes to its water solubility at low pH. Diazepam and lorazepam are insoluble in water so parenteral preparations contain propylene glycol, which can produce venous irritation. 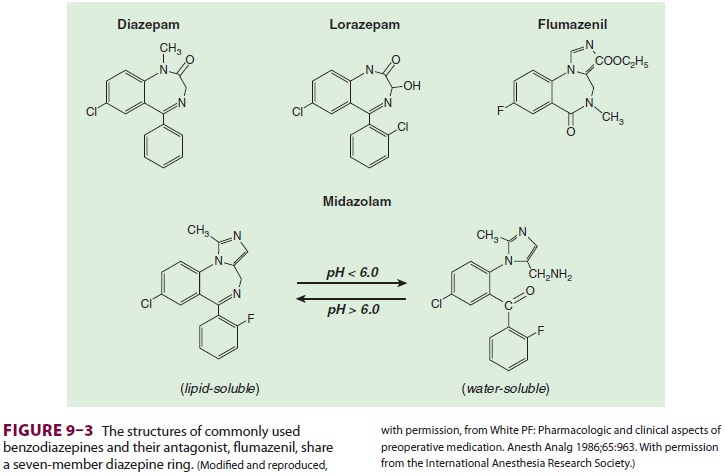 Benzodiazepines are commonly administered orally, intramuscularly, and intravenously to provide seda-tion or, less commonly, to induce general anesthe-sia (Table 9–2). Diazepam and lorazepam are well absorbed from the gastrointestinal tract, with peak plasma levels usually achieved in 1 and 2 h, respec-tively. Oral midazolam has not been approved by the U.S. Food and Drug Administration, nevertheless this route of administration has been popular for pediatric premedication. Likewise, intranasal (0.2– 0.3 mg/kg), buccal (0.07 mg/kg), and sublingual (0.1 mg/kg) midazolam provide effective preoperative sedation. 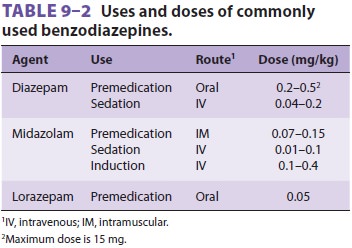 Intramuscular injections of diazepam are pain-ful and unreliably absorbed. In contrast, midazolam and lorazepam are well absorbed after intramuscu-lar injection, with peak levels achieved in 30 and 90 min, respectively. Induction of general anesthesia with midazolam is convenient only with intravenous administration.

Diazepam is relatively lipid soluble and readily penetrates the blood–brain barrier. Although mid-azolam is water soluble at reduced pH, its imidaz-ole ring closes at physiological pH, increasing its lipid solubility (see Figure 9–3). The moderate lipid solubility of lorazepam accounts for its slower brain uptake and onset of action. Redistribution is fairly rapid for the benzodiazepines (the initial distribu-tion half-life is 3–10 min) and, like the barbiturates, is responsible for awakening. Although midazolam has been used as an induction agent, neither mid-azolam nor any other of the benzodiazepines can match the rapid onset and short duration of action of propofol or even thiopental. All three benzodiaz-epines are highly protein bound (90–98%).

The benzodiazepines rely on the liver for biotrans-formation into water-soluble glucuronidated end products. The phase I metabolites of diazepam are pharmacologically active.Slow hepatic extraction and a large volume of distribution (Vd) result in a long elimination half-life for diazepam (30 h). Although lorazepam also has a low hepatic extraction ratio, its lower lipid solubility limits its Vd, resulting in a shorter elimination half-life (15 h). Nonetheless, the clini-cal duration of lorazepam is often quite prolonged due to increased receptor affinity. These differ-ences between lorazepam and diazepam illustrate the low utility of individual pharmacokinetic half-lives in guiding clinical practice. Midazolam shares diazepam’s Vd, but its elimination half-life (2 h) is the shortest of the group because of its increased hepatic extraction ratio.

The metabolites of benzodiazepine biotransforma-tion are excreted chiefly in the urine. Enterohepatic circulation produces a secondary peak in diazepam plasma concentration 6–12 h following administra-tion. Kidney failure may lead to prolonged seda-tion in patients receiving larger doses of midazolam due to the accumulation of a conjugated metabolite (α-hydroxymidazolam).

Benzodiazepines depress the ventilatory response to CO2. This depression is usually insignificant unless the drugs are administered intravenously or in asso-ciation with other respiratory depressants. Although apnea may be relatively uncommon after ben-zodiazepine induction, even small intravenous doses of diazepam and midazolam have resulted in respiratory arrest. The steep dose–response curve, slightly prolonged onset (compared with propofol or thiopental), and potency of midazolam necessitate careful titration to avoid overdosage and apnea. Ventilation must be monitored in all patients receiv-ing intravenous benzodiazepines, and resuscitation equipment must be immediately available.

Benzodiazepines reduce cerebral oxygen consump-tion, cerebral blood flow, and intracranial pressure but not to the extent the barbiturates do. They are effective in preventing and controlling grand mal seizures. Oral sedative doses often produce ante-grade amnesia, a useful premedication property. The mild muscle-relaxing property of these drugs is mediated at the spinal cord level, not at the neu-romuscular junction. The antianxiety, amnestic, and sedative effects seen at lower doses progress to stupor and unconsciousness at induction doses. Compared with propofol or thiopental, induction with benzodiazepines is associated with a slower rate of loss of consciousness and a longer recovery. Benzodiazepines have no direct analgesic properties.

Cimetidine binds to cytochrome P-450 and reduces the metabolism of diazepam. Erythromycin inhib-its metabolism of midazolam and causes a two- to threefold prolongation and intensification of its effects. Heparin displaces diazepam from pro-tein-binding sites and increases the free drug concentration.

As previously mentioned, the combination of opioids and benzodiazepines markedly reduces arterial blood pressure and peripheral vascular resis-tance. This synergistic interaction has often been observed in patients with ischemic or valvular heart disease who often receive benzodiazepines for pre-medication and during induction of anesthesia with opioids.Benzodiazepines reduce the minimum alveolar concentration of volatile anesthetics as much as 30%.Ethanol, barbiturates, and other central nervous system depressants potentiate the sedative effects of the benzodiazepines.