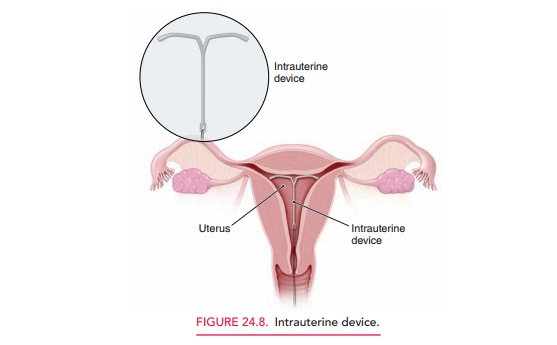 Intrauterine contraceptives, also known as intrauterine devices (IUDs), are among the most commonly usedand safe methods of interval contraception worldwide.

Intrauterine contraceptives, also known as intrauterine devices (IUDs), are among the most commonly usedand safe methods of interval contraception worldwide (Fig. 24.8). Two types of IUDs are available in the United States. Both are T-shaped. One releases a small amount of levonorgestrel into the uterus, and the other releases a small amount of copper into the uterus. 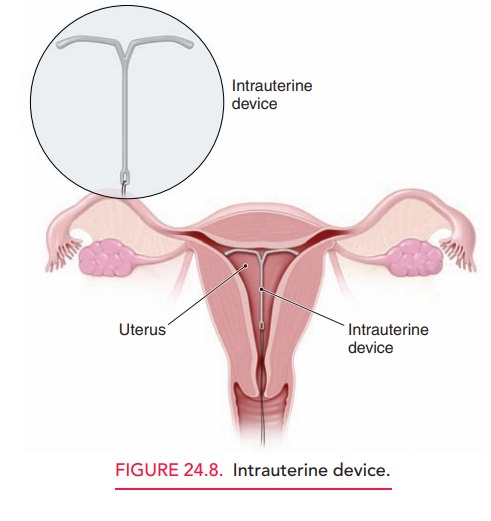 The Lippe loop is an unmedicated IUD available throughout the world except in the United States. The levonorgestrel-containing device primarily works by pre-venting the sperm and egg from meeting. It also thick-ens the cervical mucus and creates an unfavorable uterine environment. The copper in the copper-containing device can prevent the egg from being fertilized or from attach-ing to the wall of the uterus. It also prevents sperm from going into the uterus and the fallopian tube, reducing the sperm’s ability to fertilize an egg. The copper-containing IUD is also used postcoitally as emergency contraception.

A clinically important side effect of the levonorgestrel-containing IUD is a decrease in menstrual blood loss (up to 50%) and severity of dysmenorrhea. Serum proges-terone levels are not affected. IUD removal is followed by rapid reversal of these effects and return to a normal intrauterine environment and normal fertility. This sys-tem is used to relieve pain related to endometriosis and ade-nomyosis as well as for endometrial protection for women taking hormone replacement therapy who cannot take oral progestins (Box 24.4). Increased vaginal bleeding and menstrual pain are experienced by 5% to 10% of women and often result in their request to discontinue IUD use. 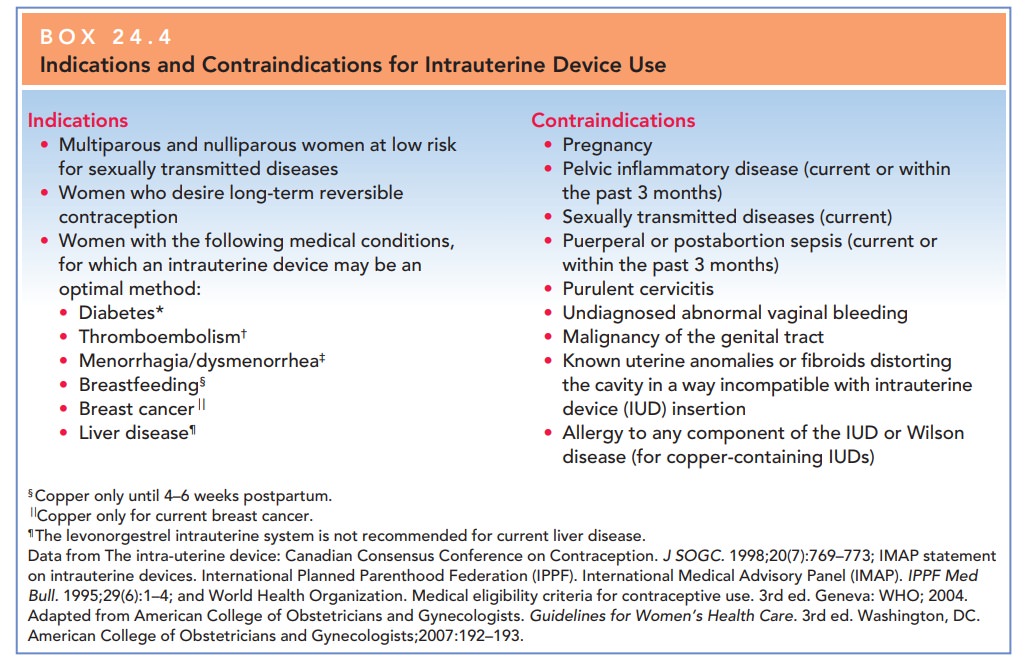 The progestin IUDs have a lesser incidence of this prob-lem, because of the progestin effect on the endometrium.

Bacteria from the endogenous cervicovaginal flora can be introduced into the uterus during IUD insertion and may cause infection. Prophylactic antibiotics have not been shown to decrease the incidence of this type of infection. Sterile technique and a vaginal prep with Betadine should be used prior to insertion of an IUD. Pelvic infection oc-curring 3 or more months after IUD insertion may be pre-sumed to be an acquired STD and treated accordingly. Women at high risk for STDs may benefit from screen-ing prior to insertion. Asymptomatic IUD users with pos-itive cervical cultures for gonorrhea or chlamydia, or with bacterial vaginosis, should be treated promptly. The IUD may remain in place unless there is evidence of spread of the infection to the endometrium or fallopian tubes and/ or failure of treatment with appropriate antibiotics.

The IUDs presently available in the United States are highly effective. The copper-containing IUD has a recom-mended lifespan of 10 years and demonstrates a pregnancy rate of 0.5% to 0.8%. The levonorgestrel-releasing IUD lasts for up to 5 years and has a pregnancy rate of 0.2%. The overall expulsion rate for IUDs is 1% to 5%, with the greatest likelihood in the first few months of use. Expulsion is often preceded by cramping, vaginal discharge, or bleed-ing, although it may be asymptomatic, with the only evi-dence being the observed lengthening of the IUD string or the partner feeling the device during intercourse. Pa-tients should be counseled to see their clinician if expul-sion is suspected.

About 40% to 50% of patients who become preg-nant with an IUD in place will spontaneously abort in the first trimester. Because of this risk, patients should be offered IUD removal if the string is visible; this is as-sociated with a decreased spontaneous abortion rate of about 30%. If the IUD string is not visible, instrumen-tal removal may be performed, but the risk of pregnancy disruption is increased. If the IUD is left in place, preg-nancy may proceed uneventfully. There is no evidence of an increased risk of congenital anomalies with either med-icated or unmedicated devices. There is, however, an ap-proximate twofold to fourfold increase in the incidence of preterm labor and delivery.

Patient selection and skillful insertion are crucial to the successful use of the IUD as a method of contracep-tion. The risk of sexually transmitted infections is the most important factor in patient selection, not age and parity.

IUD insertion is best accomplished when the patient is menstruating. This timing is beneficial because it con-firms the patient is not pregnant and her cervix is usually slightly open. If that timing cannot be achieved, it can be done at other times in the cycle as the patient is switching from another reliable method of contraception. The de-vices may also be inserted in breastfeeding women, who, in fact, demonstrate a lower incidence of postinsertional discomfort and bleeding. All IUD insertion techniques share the same basic rules: careful bimanual examination before insertion to determine the likely direction of in-sertion into the endometrial cavity, proper loading of the device into the inserter, careful placement to the fundal margin of the endometrial cavity, and proper inserter re-moval while leaving the IUD in place.

The IUD is removed by simply pulling on the string. If the string is not visible, rotating two cotton-tip appli-cators in the endocervical canal will often retrieve the strings. If this is not possible, a fine probe may be inserted, the IUD felt, and then removed with an “IUD hook” or small forceps. If needed, ultrasound guidance can assist in this process. Infrequently, IUDs become embedded in the uterine wall and require hysteroscopic removal. Even less frequently, an IUD perforates the uterus (at insertion, but is not always recognized) and requires laparoscopic removal.