About one-third of all sexually active women in the United States use oral contraceptives, with over one half of young women 20 to 24 years old using these contraceptives.

Hormonal contraceptives have many health benefits, including decreasing a woman’s risk of ovarian and uterine cancer. Although hormonal contraceptive methods are associated with risks, for most women the use of one of these agents is safer than pregnancy.

Hormone-based contraceptives provide the most ef-fective reversible pregnancy prevention available. Method (theoretical) failure rates for oral, transdermal, and trans-vaginal contraceptives are in the range of ≤1%. Longer-acting hormonal methods (injections, implants, and intrauterine contraception) have effectiveness rates that equal or even surpass those of sterilization. Because OC failures are usually related to missed pills, injectable long-acting agents, patches, implants, intrauterine contracep-tion, and rings share the additional advantage of lack of a need for daily compliance.

Hormonal contraceptives do not protect against STDs. Women who use these techniques should be counseled about high-risk behaviors and the need to use condoms for additional protection.

Most of the oral contraceptives are combinations of an estrogen and a progestin, although there are also progestin-only products. Combination oral contraceptive preparations contain ethinyl estradiol as the estro-gen component and one of the 19-nortestosterones or a spironolactone derivative (drospirenone) as the progestin product.

The progestational component pro-vides the major contraceptive effect, acting primarily by suppressing secretion of luteinizing hormone, and, in turn, ovulation. The progestational agent also provides the secondary effect of thickening the cervical mucus and also alters fallopian tube peristalsis, inhibiting sperm move-ment and fertilization, if ovulation were to occur. The estrogenic component acts by suppressing secretion of follicle-stimulating hormone (FSH), preventing matura-tion of a follicle, as well as by potentiation of the action of the progestational agent. The estrogen provides an addi-tional modest contraceptive effect, thus increasing the ef-ficacy of this method.

Many oral contraceptives contain a fixed ratio of estro-gen and progestin, although “phasic” formulations have been introduced that vary this ratio during the course of the month. This leads to a slight decrease in the total dose of hormones used per month but is also associated with a slightly higher rate of break-through bleeding (bleeding not related to the menstrual period in a woman using oral contraceptives) between periods.

The classic regimen for hormonal contraception has been 21 days of active hormone (pill, patch, and ring) and 7 days of placebo or no hormones. Hormone regimens are also available that produce shorter or less frequent menstrual periods. These new regimens shorten the withdrawal bleed and decrease menstrual-related symptoms. Another for-mulation is a monophasic ethinyl estradiol/levonorgestrel preparation that extends the cycle to 3 months. Some women may prefer this usage pattern, although they should be aware that there is a higher incidence of break-through bleeding in the first 12-week cycle, compared with the 4-week cycle preparations. New preparations continue to be developed with the ultimate goal of maximizing benefits and minimizing side effects.

Progestin-only contraceptives (progestin-only “mini-pill”) act primarily by making the cervical mucus thick and relatively impermeable. Ovulation continues normally in about 40% of patients using the progestin-only formu-lation. These oral contraceptives are of special usefulness in two clinical situations: lactating women and women over 40. In the former group, the progestin effect co-incides with the prolactin-induced suppression of ovulation; in the latter group, the inherent reduced fecundity adds to the progestin effect. There is no effect on the quality or quantity of breast milk or any evidence of short- or long-term adverse effects on infants, and the progestin-only pill may be started immediately after delivery in the breast-feeding mother. The progestin-only pill is also a good choicefor women in whom estrogen-containing formulations are con-traindicated. Because of the low dosages of progestin, theminipill must be taken at the same time each day, starting on the first day of menses. If a woman is more than 3 hours late in taking the minipill, a back-up contraceptive method should be used for 48 hours.

Oral contraceptives have many beneficial effects. Menstrualperiods are predictable, shorter, and less painful and, as a result, the risk of iron-deficiency anemia is reduced. Oral contraceptive users have a lower incidence of endometrial and ovarian cancers, benign breast and ovarian disease, and pelvic infection. By decreasing conception, the risk of ec-topic pregnancy is reduced, along with the complications of undesired intrauterine pregnancies.

Break-through bleeding occurs in 10% to 30% of women taking low-dose oral contraceptives during the first 3 months of use. Although it is an especially worri-some symptom, it is not associated with decreased effi-cacy as long as the pill-taking regimen is maintained. The abnormal bleeding pattern is the most common reason for discontinuation of contraception and women should be counseled to expect irregularities before hormones are initiated. If break-through bleeding does occur, it is best managed by encouragement and reassurance, because it usually resolves spontaneously. Break-through bleeding after approximately 3 months is associated with progestin-induced decidualization, with the shallow and fragile endometrium prone to asynchronous breakdown and bleeding. A short course of exogenous estrogen (1.25 mg conjugated estrogen for 7 days), given while the patient continues oral contraceptive use, usually stabilizes the endometrium and stops the bleeding. Taking two or three of the pills each day is not an effective therapy for break-through bleeding, because the progestin component will predominate, often worsening the problem by causing further decidualization of the endometrium.

Amenorrhea occurs in approximately 1% of usersof low-dose oral contraceptives in the first year of use, reaching perhaps 5% of users after several years of use. Contraceptive efficacy is maintained if the pill regimen is followed. Changing to a higher estrogen-containing pill or use of exogenous estrogen may be employed to induce bleeding, if the patient wishes. A pregnancy test should precede therapy.

Serious complications (such as venous thrombosis, pulmonary embolism, cholestasis and gallbladder disease, stroke, and myocardial infarction) are more likely for women using high-dose formulations. However, these complications also can occur occasionally in patients tak-ing low-dose formulations. Hepatic tumors have also been associated with the use of high-dose oral contraceptives. Although all of these complications are from 2 to 10 times more likely in pill-users, they are still uncommon.

Less serious but more common side effects also depend on the dosage and type of hormones used. Estrogens may cause a feeling of bloating and weight gain, breast tenderness, nausea, fatigue, or headache. Studies have demonstrated no overall weight gain in pill users despite the perception of weight gain. Altering the dose or com-position of the progestational agent used may relieve some of these minor side effects.

The therapeutic principle of contraception is to se-lect the method providing effective contraception with the greatest margin of safety, and then to use it as long as the patient wishes contraception or beneficial menstrual-related changes. If the patient experiences new signs or symptoms while using hormonal contraception, further evaluation or cessation of the chosen hormonal method may be required (Box 24.1). 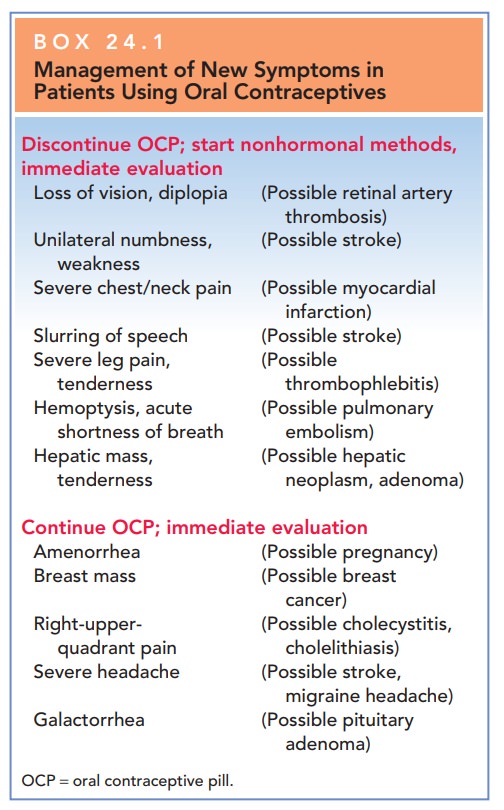 Before considering estrogen- and progestin-containing contraceptives for a patient, a careful evaluation is required. Not only are hormones relatively or absolutely contraindi-cated in some patients, but also factors such as previous menstrual history may have an impact on the choice of these agents. Combined oral conceptive use is contraindi-cated in women over age 35 years who smoke or who have had a thromboembolism, and in women with a history of coronary artery disease, congestive heart failure, or cere-bral vascular disease (Box 24.2).

Absolute and Relative Contraindications to the Use of Combination Oral Contraceptives*

Severe hypertension (if <35–40 years of age and in good medical control, can elect OCP)

Gallbladder disease (may exacerbate emergence of symptoms when gallstones are present)

Obstructive jaundice in pregnancy (some patients will develop jaundice)

Epilepsy (do not exacerbate epilepsy, but antiepileptic drugs may decrease effectiveness of OCPs)

Approximately 3% of patients may experience prob-lems with resumption of their periods after prolonged contraceptive use (postpill amenorrhea). Younger women and those who had irregular periods before the use of oral contraceptives are more likely to experience this problem after discontinuing their use. These patients should be counseled about this potential complication.

Hormonal contraceptives may interact with other medica-tions that the patient is taking. This interaction may reducethe efficacy of either the contraceptive or the other med-ications. Examples of drugs that decrease the effectiveness of contraceptives include barbiturates, benzodiazepines, phenytoin, carbamazepine, rifampin, and the sulfon-amides. Drugs that may show retarded biotransformation when contraceptives are also used include anticoagulants, methyldopa, phenothiazines, reserpine, and tricyclic anti-depressants. Antibiotics may alter the intestinal flora and are thought to interfere with hormone absorption, but ef-ficacy is not reduced. Before prescribing medications to womenusing contraceptives, the clinician should consider possible drug interactions.