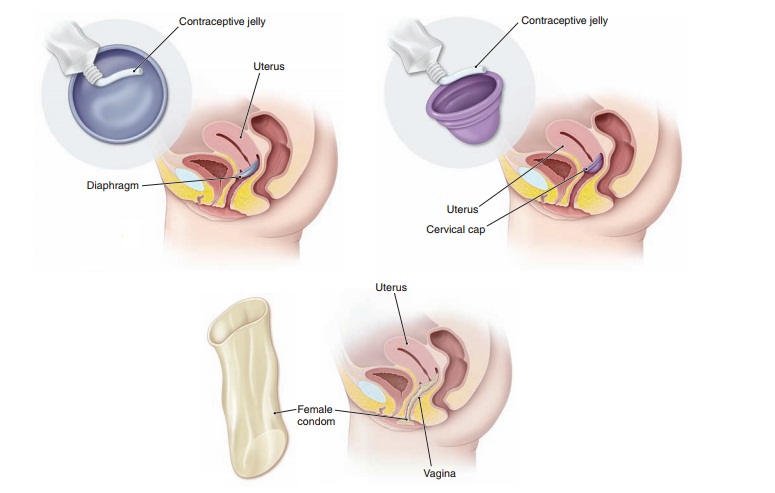 Among the oldest and most widely used contraceptive methods are those that provide a barrier between sperm and egg.

Among the oldest and most widely used contraceptive methods are those that provide a barrier between sperm and egg. These barriers include condoms, diaphragms, and cervical caps. Each of these methods depends on proper usebefore or at the time of intercourse and, as such, is subject to a higher failure rate than noncoitus-dependent methods. This isthe result of inconsistent or incorrect use as well as actual damage to the barrier material itself. For example, the latex in condoms, diaphragm, and cervical cap can be damaged by the application of oil-based lubricants. Despite this, these methods provide relatively good protection from unwanted pregnancy, are inexpensive, and most require  little or no medical consultation.

In addition, condoms and diaphragms provide some protection against the trans-mission of STDs, including gonorrhea, herpes, chlamydia, human immunodeficiency virus (HIV), and human papil-lomavirus infection.

Condoms are sheaths worn over the erect penis (malecondom) or inside the vagina (female condom) to prevent sperm from reaching the cervix and upper genital tract. Although almost one half of all condoms are sold to women, the condom is the only reliable, nonpermanent method of contraception available to men. Condoms are widely avail-able and inexpensive and may be made of latex, nonlatex or, less commonly, animal membrane (usually sheep cecum). A reservoir tip reduces the likelihood of breakage. Only latex condoms protect against HIV.

The condom is well-tolerated, with only rare reports of skin irritation or allergic reaction. Some men complain of reduced sensation with the use of condoms, but this may actually be an advantage for those with rapid or premature ejaculation. The slippage and breakage rate in normal use is estimated at 5% to 8%. In these cases, couples should be counseled to seek medical care within 72 hours so that emergency contraceptive methods may be used.

The female condom is a sheath, or vaginal liner, that fits into the vagina before intercourse (Fig. 24.5). All have slippage and breakage rates of about 3%, and, as in the case of diaphragms and cervical caps, it is recommended that they be left in place 6 to 8 hours after coitus. 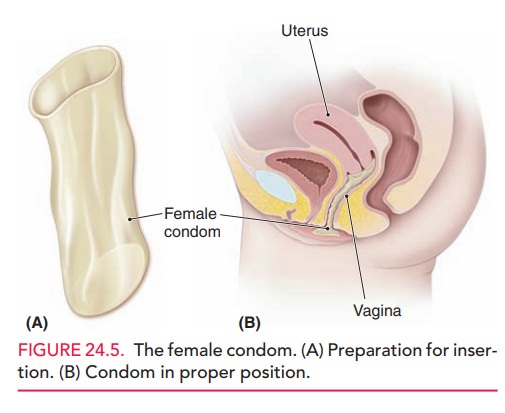 The Diaphragm, Cervical Cap, and Sponge

The diaphragm is a small, latex-covered, dome-shaped device. Proper use of a diaphragm includes applying a contraceptive jelly or cream containing spermicide into the center and along the rim of the device, which is then inserted into the vagina, over the cervix, and behind the pubic symphysis. In this position, the diaphragm covers the anterior vaginal wall and cervix.

The diaphragm can be inserted up to 6 hours before intercourse and must be left in place for 6 to 8 hours after-ward, but not more than 24 hours. It may then be removed, washed, and stored. Users should be cautioned not to use talc to dry the diaphragm. If additional intercourse is desired during the 6- to 8-hour waiting time, addi-tional spermicide should be applied without removing the diaphragm, and the waiting time should be restarted.

There are several sizes of diaphragm available and one must be fitted to the individual patient. Fit may change withsignificant weight change, vaginal birth, or pelvic surgery. The diaphragm should be the largest that can be comfort-ably inserted, worn, and removed. If the diaphragm is too small, it may slip out during coitus because of vaginal elongation; if it is too large, it may buckle, causing discom-fort, irritation, and leakage. The patient must be initially instructed in the proper positioning of the diaphragm, with the correct position subsequently verified by the pa-tient each time it is used. If the cervix can be felt through the dome of the diaphragm, the positioning is correct. If a diaphragm is fitted in the postpartum period, its sizing should be reevaluated in 2 to 3 months, because vaginal di-mensions and support may change in the interval. Correct positioning of a diaphragm is shown in Figure 24.6. 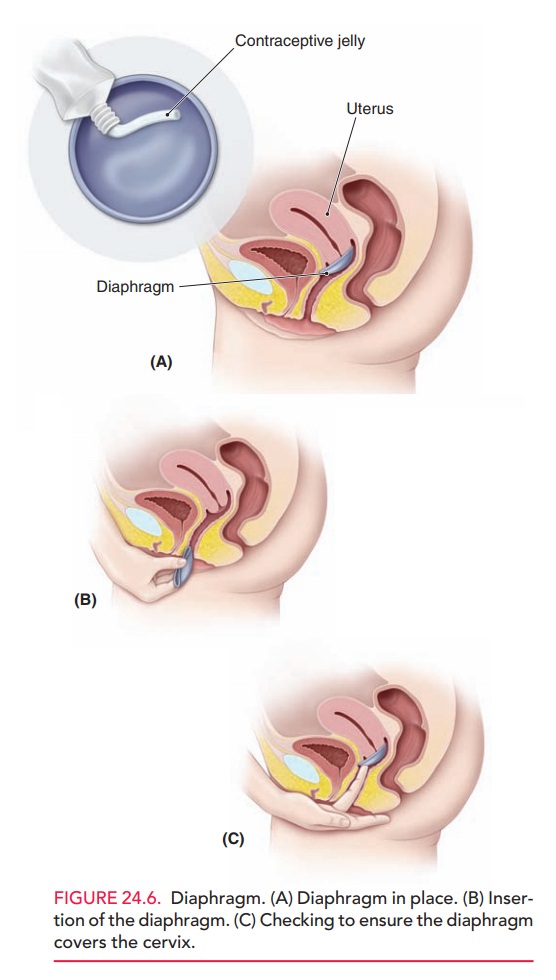 Women who use diaphragms are approximately twice as likely to have urinary tract infections as women using hormonal contraception. The increased risk of UTI may be caused by a combination of pressure against the urethra, causing urinary stasis, and an effect of spermicides on the normal vaginal flora, increasing the risk of Escherichia coli bacteriuria and infection.

The cervical cap is a smaller version of the diaphragm that is applied to the cervix itself. This method is associated with a relatively high degree of displacement as well as with cervicitis and toxic shock syndrome. It also requires con-siderable effort to fit. The cervical cap should also be used in conjunction with spermicide. It must be left in place for 6 hours after intercourse, but not longer than 48 hours. Additional spermicide does not need to be applied with re-peated acts of intercourse during that time. Correct posi-tioning of the cervical cap is shown in Figure 24.7. 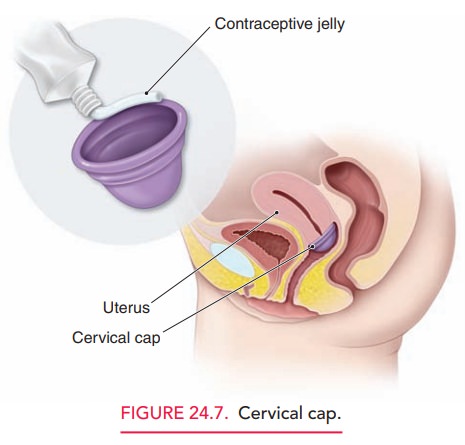 The contraceptive sponge is a small, pillow-shaped sponge containing spermicide. The sponge has a dimple that is designed to fit over the cervix and remain in place during intercourse. The opposite side has a loop to facil-itate removal. The sponge is only available in one size, which may explain why it is more effective in a nulliparous woman than in one who has had children. The sponge is moistened prior to insertion and can be used for repeated acts of intercourse in a 24-hour period. The sponge should be left in place for at least 6 hours after intercourse, but wearing it for more than 24 hours is not recommended because of the risk of toxic shock syndrome.

Spermicides are preparations that contain an active chem-ical that kills sperm as well as some type of carrier or base (e.g., gel, foam, cream, film, suppository, or tablet). In the United States the active ingredient is nonoxynol-9 (N-9). Foams and tablets should be inserted high into the vagina against the cervix, from 10 to 30 minutes before each act of intercourse. The duration of maximal spermici-dal effectiveness is usually no more than 1 hour. Douching should be avoided for at least 8 hours after use. There is no known association between spermicide use and con-genital malformation.

Spermicides are economical, well-tolerated, and effec-tive in protection against pregnancy. Spermicides used in com-bination with condoms have failure rates that approach those of hormonal methods. Spermicides provide little, if any, protec-tion against sexually transmitted infections when used alone.