Learning Objectives * To understand the necessity for extension of whole numbers to negative numbers. * To know that the collection of zero, positive and negative numbers forms integers. * To represent integers on the number line. * To compare and arrange integers in ascending and descending order.

* To understand the necessity for extension of whole numbers to negative numbers.

* To know that the collection of zero, positive and negative numbers forms integers.

* To represent integers on the number line.

* To compare and arrange integers in ascending and descending order.

We already have learnt about natural numbers, whole numbers and their properties which were dealt in the first term. Now we shall know about another set of numbers.

Think about the situation

The teacher sees that Yuvan and Subha are ready to play a game with a deck of playing cards. Two different coloured tokens (blue and yellow here) are taken so that they represent the position on a number strip which is numbered from 0 to 20 with 0 as the starting point and which can be extended further. 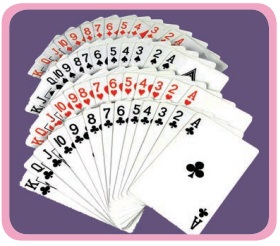 Rules for the game

ii) Whoever reaches the number 20 first will be declared as the winner. (more students can play this game by choosing different coloured tokens)

Yuvan: Subha, I have chosen the blue token.

Subha: Okay, Then I shall take the yellow token.

Yuvan: The number strip is ready as shown below and let both the tokens be placed at the starting position 0. Shall we start playing?

Subha: Yes. I shall pick a card first. I have picked a black card and it shows 5.

So I will move forward to keep my yellow token at 5 on the number strip.

Yuvan:  Now, I pick …It is black card again and it shows A on it. I will keep my blue token by moving one step forward at 1 on the number strip.

Subha: I pick a red card now and it shows 2 on it.

I need to move backward by 2 steps and I shall keep my token at 3. Is it correct, Yuvan?

Yuvan: Fine Subha. Now, I too have picked the red card and it shows A again. Oh, no..! I will move backward by one step to be again at the starting position 0.

Subha: I am 3 steps ahead of you! Now, I have the red card showing 4 on it. I need to move 4 places backward from 3. But, where shall I keep my token, Yuvan? I moved 3 places only but need one more place behind 0. There is no number on the left of 0.

Subha: Shall I mark it as 1 again?

Yuvan: No, Subha. That won’t be correct. We know that 1 already exists to the right of 0.

Subha: Then, what should I do? I can’t move to the left of '0'. Is the game over or shall I pick another card to continue?

Teacher: To sustain the interest in the game, continue playing with a small addition in the rule as whoever reaches *20 first, will also be considered as the winner!

Yuvan: What, if you pick the red card again which shows 4 ?

Yuvan: Well said…! What can you say, assuming that I am at 5?

Subha: Yes, Yuvan. We will be at the same distance but on the opposite sides of '0'. Am I right?

Yuvan: Yes. you are right but your value is less than mine as you go to the left of '0'.

Who will win finally? Which is the factor that will decide the winner? How far can you extend the numbers on both sides of the strip?

From the above game, we understand that there is a need to go beyond 0 on to its left! We also observe that as 1 is to the right of 0, there should exist *1 to its left with the same distance as 1 and it extends on both sides in the same way.

We generalise this * symbol to ‘–’ (minus or negative sign) to denote the numbers less than '0' which conveys the meaning as less, deficit, reduce, down, left, etc.,

Mariana Snailfishes live in the Mariana Trench at 26,200 feet below the sea level.

Temperature in the Ladakh region of India records at 14°C below 0°C on an average in the month of January every year.

We know that when zero is included to the set of natural numbers then the set of numbers is called as Whole numbers.

Now, let us recall the number line which shows the representation of whole numbers.

● The number line can be shown both in horizontal and vertical directions.

● The number 0 is neither positive nor negative and hence has no sign.

● The positive and the negative numbers together are called as Signed numbers. They are also called as Directed numbers.

The letter ‘Z’ was first used by the Germans, because the word for Integers in the German language is “Zahlen” which means “number”.

2 Draw a number line and mark the following integers.

3 Are all natural numbers integers?

4 Which part of the integers are not whole numbers? 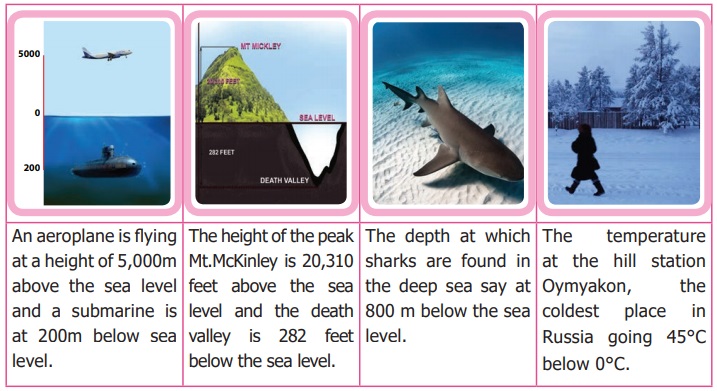 Ask your parents / grandparents about the depth at which the various types of vegetables (seeds) should be planted, for their better and efficient growth. For the same, draw a number line indicating the depth of various vegetable seeds. (Draw the planting chart!).