i) a sapling planted at a depth of 3m.

2. Mark the following numbers on a number line

i) All integers which are greater than −7 but less than 7.

3. Construct a number line that shows the depth of 10 feet from the ground level and its opposite.

The depth of 10 feet from the ground level

The opposite of the depth of 10 feet

4. Identify the integers and mark on the number line that are at a distance of 8 units from −6.

5. Answer the following questions from the number line given below .

G is left of K. So integer K is greater.

iii) How many integers are there between G and H?

iv) Find the pairs of letters which are opposite of a number.

8. Is there the smallest and the largest number in the set of integers? Give reason.

No, as the number line number extends on both sides without any end, we cannot find the smallest (−) and the largest (+) number.

9. Look at the Celsius Thermometer and answer the following questions:

i) What is the temperature that is shown in the Thermometer?

ii) Where will you mark the temperature 5° C below 0° C in the Thermometer?

iv) Mark the opposite of 15° C in the Thermometer.

10. P, Q, R and S are four different integers on a number line. From the following clues, find these integers and write them in ascending order.

i) S is the least of the given integers.

iii) The integers P and S are at the same distance from 0.

11. Assuming that the home to be the starting point, mark the following places in order on the number line as per instructions given below and write their corresponding integers.

i) Bus Stand is 3 units to the right of Home.

ii) Library is 2 units to the left of Home.

iii) Departmental Store is 6 units to the left of Home.

iv) Post Office is 1 unit to the right of the Library.

vii) Bus Stand is 8 units to the right of Railway Station.

viii) School is next to the right of Bus Stand.

ix) Playground and Library are opposite to each other.

x) Electricity Board and Departmental Store are at equal distance from Home. 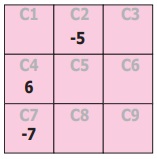 C3: the opposite to the second negative integer.

C6: the successor of the integer in C2.

C8: the predecessor of the integer in C7.

C9: the opposite to the integer in C5. 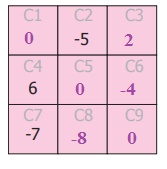 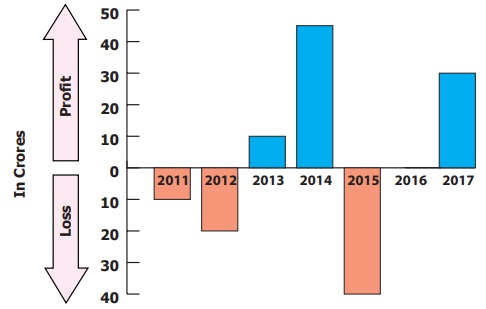 i) Write the integer that represents a profit or a loss for the company in 2014?

8. No, as the number line number extends on both sides without any end, we cannot find the smallest (−) and the largest (+) number