Both chemical and physical parameters are used to characterize water quality, and many instruments based on different principles are used.

Both chemical and physical parameters are used to characterize water quality, and many instruments based on different principles are used. Instruments for measuring water quality can be divided into on-line and off-line instruments based on their construction. On-line instruments that can stay in the water carry out continuous monitoring and are always a type of electrode or sensor. The same instrument may, however, also be used off-line for individual measurements. Off-line instruments are more closely related to those in laboratories, and normally more work is needed to perform an analysis, together with experience in performing laboratory work in some cases.

On-line instruments or chemical analysers can be separated into those that use sensors but no reagents, and wet-chemistry analysers. Use of instruments with a sensor is advised, because they reduce the manual input. Wet-chemistry analysis can be classified on the principle of the analyses: typical examples are colorimetric, titrimetric and ion-selective electrodes. Colorimetric measure-ments are much used, and function by adding a reagent to the water sample and monitoring the colour change with a detector. A typical detector is a spectrophotometer that measures the light absorption of the sample. The great disadvantage with wet-chemistry analysers is that a sample from the water flow needs to be taken to which a reagent is added. Stopped flow/batch mode analysers and flow injection analysers are available.1n the latter pumps and valves ensure that samples are auto-matically taken from the water flow and trans-ported to the instrument for monitoring before being released so that a new sample can be taken. Some common devices for water analyses are described briefly below; more information can be obtained from the literature, for example, refs 2 and 9.

In fish farming, temperature needs to be measured in several situations, for instance, the farming water or inside slaughtered fish. One principle utilized to measure temperature is the expansion of certain substances with temperature as in a mercury ther-mometer. The construction of the thermometer is such that even quite a small expansion of the mercury causes a noticeable change in the level in the thin pipe where the reading is taken. Ther-mometer manufactures calibrate the scale according to known values: a bath with freshwater and ice is 0°C at normal atmospheric pressure and is the boiling point of freshwater is 100°C under the same conditions. The Celsius scale divides the interval between 0 and 100 into equal degrees. Other sub-stances besides mercury can be used in thermometers using this principle

The difference in voltage occurring between two different materials may also be used for measuring temperature. If two different metals are soldered together, for instance copper and constantan, a current will flow, the size of which will be proportional to the temperature. If the point where the two materials are soldered together is affected by a temperature gradient, the electrical current will also vary. This equipment is called a thermocouple; it is simple but not as accurate as other devices.

A thermistor is also a temperature dependant resistance, but is more complex and includes semi-conductor technology. Higher accuracy is achieved with this principle than with the other methods described. The device is simple and the price reasonable; thermistors are therefore widely used for temperature measurement

The oxygen content may be measured either chemically or electronically. The normal chemical method is the so-called Winkler method which is a titration method, consisting of adding certain chemicals to the water and observing a colour change which will be directly related to the oxygen concentration.

When measuring oxygen concentration electronically, a sensor or probe is used. This can be constructed using a positively charged conductor (anode) and a negatively charged conductor (cathode) separated by an insulator (Fig. 19.2). In one design, an electrolyte is located around the electrodes (anode and cathode). A special membrane covers the electrolyte, keeping it in place and protecting it. The membrane is permeable to oxygen molecules. As there is a positive and a negative electrode, electrolysis will occur, and electrons will pass between the two electrodes. The magnitude of the electron transport is affected by the amount of oxygen in the electrolyte; this again depends on the amount of oxygen transported through the membrane, which is related to the amount of dissolved oxygen in the water. 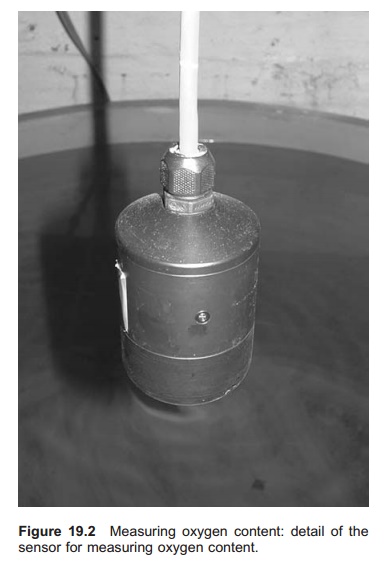 It is important to calibrate this type of instrument accurately. For some instruments it is necessary to calibrate for air pressure and temperature, while in others this is integrated. The electrolyte and the membrane or the complete sensor, must be changed at defined intervals. Since the membrane is very thin it is easy to break, care must be taken when handling it. Ageing of the membrane can be detected, because it becomes difficult to get stable results and the values fluctuate constantly. The membrane is also exposed to fouling, and must regularly be visually inspected and cleaned. If fouling occurs the oxygen values will normally drop in relation to the correct values.

Several methods are used to measure pH to prevent it dropping to critical values. A simple but inaccurate way is to observe the colour change of pH paper, also known as litmus paper, when it is dipped into water. This paper contains a chemical, the colour of which is pH dependent. Similarly, a small water sample can be taken, a specially prepared liquid added to it and the colour change observed.

The pH can also be measured by a standard chemical analysis with titration and observing the change in colour, which is pH dependent. This system may be implemented for daily measure-ments on a fish farm and has the advantages of requiring low maintenance and being reliable. The disadvantages are, however, that this takes some time and experience of working with chemical equipment, and measurements in a laboratory are necessary.

A pH meter is constructed on the same principle as the oxygen meter. Here the probe is constructed with two electrodes, one for measuring the concentration of H+ and the other as a reference electrode. In this case the pH electrode consists of a membrane permeable to hydrogen ions. Here also the membrane creates a cell that encloses the electrolyte. Between the electrodes a current will pass that depends on the concentration of H+. The voltage between the pH electrode and the reference electrode is then measured, and the pH calculated.

Instruments for measuring pH must be calibrated before use. This is performed by placing the probe in different solutions of known pH and then adjusting the instrument. The pH probe is compact, in contrast to the O2 probe; therefore it must be completely replaced if it ceases to function. A disadvantage of the pH probe is its limited duration, normally from 3 months up to 1 year in special cases. Practical experience with the use of pH meters in fish farming shows that maintenance is of extreme importance. Both calibration and changing of electrodes must be done regularly to achieve reli-able measurements.

Conductivity is a measure of the ability of water to conduct an electric current. In fish farms this is important in order to evaluate the ability of the water to inhibit pH fluctuations, i.e. the buffering capacity. In seawater, Na+ and Cl− ions dominate and here the instrument is used to measure the salinity.

The probe consists of two electrodes and is lowered into the water. A small electric potential (voltage) is applied across the electrodes. An electric current will occur between the electrodes, the size of which depends on the ion concentration in the water. To prevent the establishment of a layer on the electrodes which affects the current, it is necessary to use an alternating current as pre-voltage.

Conductivity is affected by temperature, so it is important to compensate for this parameter when taking measurements. Each instrument should have a special table setting out the effect of temperature on the conductivity. Advanced instruments incorporate automatic temperature compensation.

The total gas pressure in the water is measured mainly to find not only the total pressure, but also the amount and saturation of dissolved nitrogen gas (N2). If the saturation of nitrogen in the water is above 100%, the fish may suffer from gas bubble disease. This is more critical in fry stage fish than in adult fish. In salmonids problems have been observed when saturation is over 102%, but it is recommended that saturation be maintained below

100.5%. Marine fish fry has been shown to be very sensitive for supersaturation of nitrogen. Problems may also occur if the total gas pressure is too high and there are some indications that above 100% total pressure may be detrimental.

One method to measure the total gas pressure in the water is to use a saturometer (saturation meter) (Fig. 19.3). The main part of the instrument is a small silicon tube into which the dissolved gases from the water pass (the silicon acts as a mem-brane) and become enclosed. A pressure meter is attached to the tube and the measurement is carried out by determining the difference in pres-sure between the local atmospheric pressure and the pressure inside the silicon tube. 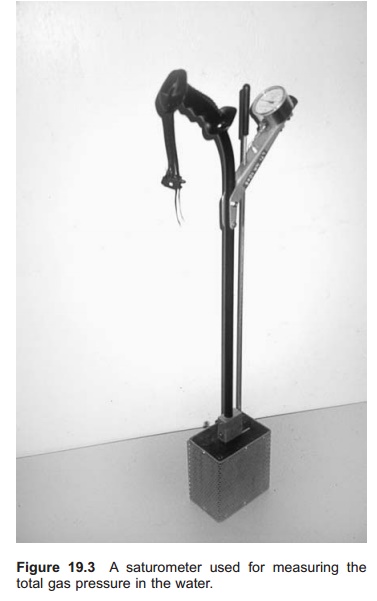 Before using the saturometer, the pressure inside the cylinder must be equalized to the surrounding environmental pressure. This is carried out by placing the probe in the air for some minutes before placing it in the water. A perforated cover sur-rounds the cylinders and a manual pump is used to ensure water flow past the cylinder. The instrument has to stay in the water for 5–10 minutes before a reading can be taken.

In order to determine the total gas pressure when using a saturometer the following equation must be employed:

∆P= pressure difference (read from the saturometer) between total gas pressure in the water and local barometric pressure (mmHg).

When calculating the nitrogen pressure, which is a critical factor for avoiding gas bubble disease, the following equation may be used:

N2 = partial pressure of nitrogen gas in the water

by an oxygen meter (mg/L)

The two numbers in the equation are conversion factors.

There are also other instruments available for monitoring the nitrogen gas saturation which are simpler to use. 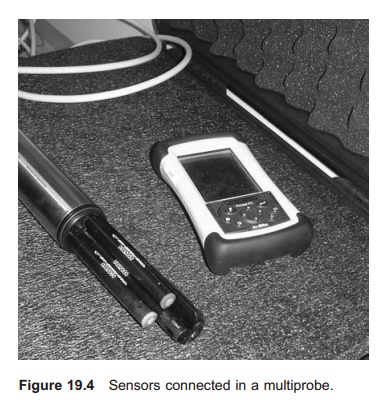 Instruments using traditional chemical laboratory methods have also been developed for use under field conditions; for instance there are special types for aquaculture facilities. One commonly used instrument is based on a spectrophotometer, in which the sample is illuminated by light of a specific wavelength and the amount of light passing through is monitored. Before putting the sample in the spectrophotometer a chemical is added and so that a colour change will occur, the size of which will depend on the amount of substance to be measured in the sample. To avoid much work with weighing out of chemicals specially prepared ampoules, each with the correct amount of chemical for one water sample, are delivered with the instrument. Many chemical analyses can be run in such instruments which are quite simple to use