To count fish manually on large aquaculture farms is very labour intensive; for example, a juve-nile production plant delivering 1 million juveniles to an on-growing plant. Therefore it is beneficial to do this automatically. The problem when counting fish automatically is to separate the individuals and to avoid two or more fish coming together and being counted as one. One challenge when developing equipment for counting fish is therefore to find a way to separate the fish on an individual basis.

Counting can be done when the fish are in or out of the water. Self-counting of the fish when they are put into water has been very difficult in practice because the fish are reluctant to pass any obstacle voluntarily. Some of the equipment used for counting fish can also be used for measuring the size of the fish (see section 19.5.2).

A suitable place to count the fish is in connection with internal transport or grading. Here the fish are normally taken out of the water and it is quite easy to count them and carry out the other operations, most of which will also require counting to control the number of fish.

One fairly cheap and simple method used to sepa-rate the individual fish is to let them slide in a convex V-shaped channel (Fig. 19.10). By having a convex channel the velocity of the sliding fish will gradually increase. This will separate the individuals and it is now quite easy to count the single fish, for instance with the use of light sensitive cells. The light diodes create a beam that is broken by the sliding fish, which is thus counted. Counting of the fish in water is normally done in connection with pumping or transport through pipes. Some kind of camera is commonly employed, either a video camera or a linear camera.

During the past few years camera technology has developed rapidly together with the use of image analysis, which has also been utilized for counting fish (Fig. 19.11). The challenge when using cameras is to achieve good pictures, with sufficient contrast to the background because black and white images are commonly used. A chamber with proper light conditions is therefore required. This may be included on the pump pipe as a separate unit. To avoid two fish coming together and being counted as one, image analysis, either with two cameras or one camera and a mirror to give two pictures, is employed. This system may also be used to calculate the size of the fish but then other algorithms are used. The difference in conductivity between water and fish may also be used to count them, but here also it will be difficult to separate the individuals.

It is no longer necessary to lift fish out of the water and weigh them to obtain a traditional weight sample, or to lift them into a calibrated tank and use Archimedes’ law to calculate the weight of the fish group. Archimedes law can be used because the fish will displace a volume of water equal to their own volume. If it is assumed that 1 l of water weighs 1 kg of water the volume displaced in litres will be equal to the weight of the fish in kilograms. By having a scale on the tank wall the increase in water level can be monitored and in this way the biomass found. Equipment for measuring fish size and total biomass is useful for production planning and control, and also for deciding when to size grade and for planning harvesting.

Today, various equipment is available for mea-suring fish size automatically whilst they remain in the water. The equipment used for automatic count-ing and weighing of the fish can be separated in two depending on whether: the fish stay in or are taken out of the production unit. The first category com-prises equipment that is lowered into the production unit and does not disturb the behaviour of the fish; the second normally comprises measuring equipment connected to a fish pump.

Measurements where the fish stay in the production unit

Several systems have been developed, mainly for sea cages, to measure either the single fish size or the total biomass of the fish in the cage, or a com-bination of the two. The reason for the interest in measuring in sea cages is due to the large amount of fish and high feed consumption. Good control of fish weight and development are therefore important. In a cage it is impossible to control totally environmental factors that affect the appetite of the fish. Neither is it possible to foresee exactly changes in environmental factors (i.e. the weather) for prognosis.

·  Detailed measurements obtained by leading the fish through a sensor for individual registration, e.g. by optical, impedance, capacitance or ultra-sounds techniques

One commonly used technique based on the second method is a measuring frame. This is a rectangular frame that is lowered into the cage. In the walls of the frame there are a number of light diodes placed in rows so they create a linear camera (Fig. 19.12). When the fish swim through the frame the light diodes create a shadow picture. Using a computer, the approximate size of the fish is calculated, based on image analysis of the shadow picture. The system is based on a random sample of fish voluntarily swimming through the frame during a given period. This will occur in cages because the fish are swimming voluntarily around in the cage. The number of passages through the frame depends on the fish density. At fish densities between 10 and 20 kg/m3 a typical swimming frequency is 30–200 fish per hour13. If two fish pass through the frame together, the image analyses will remove the picture as not being useful. Only the passages where a single fish passes through the frame and a good picture is achieved are used to calculate the average fish size. This is done based on a side view of the fish when it passes through the frame. The side area of the fish is highly correlated with its size. Based on the large number of measurements on single fish, the average fish weight with a standard deviation can be calculated for the total cage. Comparison of these data with the actual weight achieved at the slaughter house has shown good correlation. The standard deviation gives important information about the size variation of the fish in the cage and can be used to tell when size grading is necessary. If the average size of fish is known, it is possible to calculate the total biomass provided that the number of fish in the cage is known. When using such a system for calculating the total biomass, it is of course very important to account for the dead fish, and there must be no unregistered escape of fish from the cage. To use the frame it is necessary that the fish swim voluntarily around in the production unit; it is not possible to use the system in fish tanks with a water flow, because here the fish will stay still in the water flow.

Another method based on camera technology for finding the size of fish in a cage utilizes a stereo-video system14,15. Two video cameras sitting above each other in a rack with a known distance between them are used (Fig. 19.13). By taking pictures of the fish, with both cameras, it is possible to calculate the distance from each camera to every point on the fish; image analysis will give the length and height of the fish; there is a high correlation between these measurements and the weight of the fish. Experiments using three cameras simultaneously to count fish in cages have also been performed.

Video cameras like those used for counting fish can also be used for biomass estimation. This system is quite large for use in cages and it may be difficult to get the fish to swim through the unit or channel voluntarily. When using such a unit in con-nection with pumping, this does not present any problem because here the fish are moved by force. By taking a picture from the side when it passes the video camera and calculating the area of the fish, its weight can be found.

Hydroacoustics is a totally different principle used for measuring total fish biomass in a sea cage which employs an echo sounder.19This is actually the same method as used in traditional fishing to find where and at what depth the fish are swimming. It also gives some information about the amount of fish. An echo sounder contains a source that emits sound pulses at fixed intervals and a transducer which is normally placed below the cage. The source sends the sound pulses up to the water surface in the cage; this is the opposite direction to the echo sounders used for fishery which send sound pulses down to the bottom. When the sound pulse hits a fish it is reflected. A receiver fixed near the sound source beyond the cage receives this reflected signal (echo), which is travelling in the opposite direction to the sound pulse that was sent out (Fig. 19.14). The sound pulses are very short (1 ms is typical) and separated by longer intervals during which the receiver is listening for echoes before the next sound pulse is sent out. Therefore several echoes are received over the course of a minute. The size of the echo depends on the size of the individual fish or fish shoal. By using an echo sounder it is also possible to obtain information about the behaviour of the fish and the depth in the cage at which they are swimming under various environmental conditions. It is often the swim bladder of the fish that is the source of the echoes registered by the echo sounder; a good echo is generated here because the swim bladder is filled with air. Echo sounders are not used to measure the size of single fish with high accuracy because the magnitude of the echo is highly dependent on the direction of the swim bladder in relation to the sound source and will vary if the fish is swimming upwards, downwards or horizontally. For the whole fish group it will, however, give quite a good estimate. Echo sounders cannot so easily be used in tanks because sound reflections from the tank bottom and walls will interfere with the measurements.

Measurements where the fish are removed from the production unit

It is possible to install a video camera in a pipe used for pumping fish or an ordinary pipe. This takes pictures from the side and eventually above, and calculates the fish size from image analysis of the pictures (Fig. 19.15). The system is the same as described earlier for counting fish, the only differ-ence being the image analysis program used to calculate fish size. 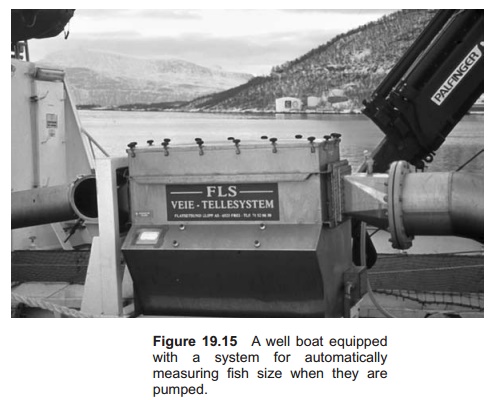