Induction from the Lysogenic State

In this section we discuss how lambda escapes from the lysogenic state and enters a lytic cycle. One time at which this occurs follows host DNA damage and repair.

Induction from the Lysogenic State

In this section we discuss how lambda escapes from the lysogenic state and enters a lytic cycle. One time at which this occurs follows host DNA damage and repair. The signal a phage uses for detection of this damage is the extensive binding of RecA protein to single-stranded DNA that accumulates at a replication site when extensive DNA damage is pre-sent. Apparently when polymerized along the single-stranded DNA, RecA is held in a shape that interacts with LexA and lambda repressor. The interaction stimulates the inherent self-cleavage activity of these repressors (Fig. 14.15). Once cleaved, these repressors are no longer able to repress.

In a nonlysogenic cell the genes that are normally repressed by LexA protein are the lexA gene itself, the recA gene, and a set of about 20 others that are part of the SOS system. Known functions of this system are to repair damaged DNA and to postpone cell division until repair is completed. Once repair is completed, the single-stranded DNA no longer available to activate RecA. Consequently, newly synthesized LexA pro-tein is no longer cleaved and it therefore represses synthesis of RecA and the other proteins of the SOS system. In a normal nonlysogenic cell, the SOS system switches off when it is no longer needed. 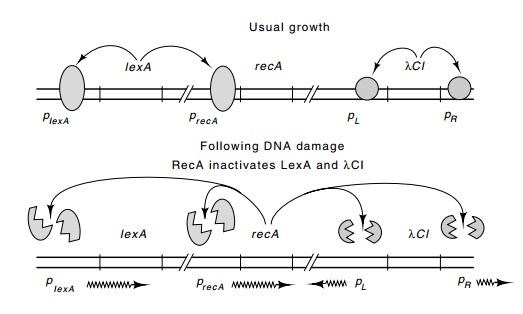 Figure 14.15 LexA protein represses its own synthesis as well as that of RecAprotein. Cleavage of LexA and lambda repressor activated by RecA derepresses the lexA, recA, and lambda operons.

Figure 14.16 Representation of the structure of lambda repressor and theeffects of cleavage by RecA protease. The DNA-binding domains are shown contacting one another while on DNA because a small bit of the dimerization energy derives from such an interaction. 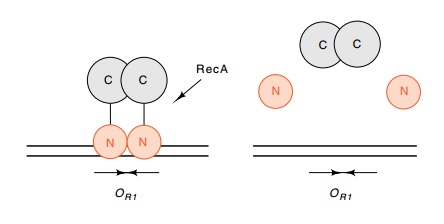 As required for induction, the affinity of the monomeric N-terminal domain for operator is much lower than that of the intact dimeric repressor. Furthermore, the N-terminal domains do not show strong cooperativity in their binding to adjacent operators. In the next section we will see why the proteolytic cleavage and elimination of dimeric DNA-binding domains greatly reduce the affinity of repressor for opera-tor. As a result of this reduced affinity, repressor comes off the DNA and the phage induces.

The N-terminal domain of repressor makes protein-protein contacts with RNA polymerase when it stimulates transcription from the pRM promoter (Fig. 14.17). The stimulation provided by this positive-acting factor is similar to the stimulation provided by CRP protein. The repressor accelerates the isomerization rate by RNA polymerase after it has bound to pRM. CRP bound near position -41 on promoters also stimulates isomerization.

Figure 14.17 The activation of RNA polymerase atpRMby two repressordimers bound at OR1 and OR2.