In Situ and Ex Situ Techniques

A common way in which all forms of remediation are often characterised is as in situ or ex situ approaches.

In Situ and Ex Situ Techniques

A common way in which all forms of remediation are often characterised is as in situ or ex situ approaches. These represent largely artificial classes, based on no more than where the treatment takes place – on the site or off it – but since the techniques within each do share certain fundamental operational sim-ilarities, the classification has some merit. Accordingly, and since the division is widely understood within the industry, these terms will be used within the present discussion.

The major benefit of approaches which leave the soil where it is for treatment, is the low site disturbance that this represents, which enables existing build-ings and features to remain undisturbed, in many cases. They also avoid many of the potential delays with methods requiring excavation and removal, while additionally reducing the risk of spreading contamination and the likelihood of exposing workers to volatiles. Generally speaking, in situ methods are suited to instances where the contamination is widespread throughout, and often at some depth within, a site, and of low to medium concentration. Additionally, since they are relatively slow to act, they are of most use when the available time for treatment is not restricted.

These methods are not, however, without their disadvantages and chief amongst them is the stringent requirement for thorough site investigation and survey, almost invariably demanding a high level of resources by way of both desktop and intrusive methods. In addition, since reaction conditions are not readily controlled, the supposed process ‘optimisation’ may, in practice, be less than optimum and the true end-point may be difficult to determine. Finally, it is inescapable that all site monitoring has an in-built time lag and is heavily protocol dependent.

The main characteristic of ex situ methods is that the soil is removed from where it originally lay, for treatment. Strictly speaking this description applies whether the material is taken to another venue for clean-up, or simply to another part of the same site. The main benefits are that the conditions are more readily optimised, process control is easier to maintain and monitoring is more accurate and simpler to achieve. In addition, the introduction of specialist organisms, on those occasions when they may be required, is easier and/or safer and generally these approaches tend to be faster than corresponding in situ techniques. They are best suited to instances of relatively localised pollution within a site, typically in ‘hot-spots’ of medium to relatively high concentration which are fairly near to the surface.

Amongst the main disadvantages are the additional transport costs and the inevitably increased likelihood of spillage, or potential secondary pollution, rep-resented by such movement. Obviously these approaches require a supplementary area of land for treatment and hence they are typically more expensive options. 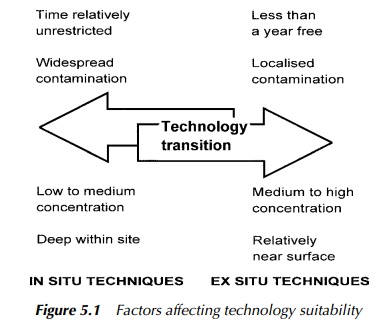 As Figure 5.1 illustrates, the decision to use in situ or ex situ techniques is a comparatively straightforward ‘black-or-white’ issue at the extremes for either option. However, the middle ground between them comprises many more shades of grey, and the ultimate resolution in these cases is, again, largely dependent on individual circumstance.