The major benefits of ex situ methods are the greater ease of process optimisation and control, relatively shorter treatment time and the increased potential for the safe introduction of specialised organisms, if and as required.

Again, there are three principal approaches in common use, namely land farming, soil banking and soil slurry bioreactors. Though inevitably there are distinct similarities between all applications of bioremediation, for obvious reasons of fundamental biology, these techniques are generally more distinct and separate.

The major benefits of ex situ methods are the greater ease of process optimisation and control, relatively shorter treatment time and the increased potential for the safe introduction of specialised organisms, if and as required. However, the increased transport costs, additional land requirement and higher levels of engineering often combine to make these technologies more costly options.

This technique is effectively accelerated natural attenuation, taking place offsite, within constructed earthwork banking to provide what is essentially a low-tech bioreactor. The pretreatment stage involves the soil being excavated from site, screened for rocks, rubble and any other oversize inclusions before typically being stored prior to the commencement of actual remediation, either at the original location or on arrival at the treatment site.

The processing itself takes place in lined earthworks isolated from the sur-roundings by an impermeable clay or high density polyethylene (HDPE) liner, as shown diagrammatically in Figure 5.8, and typically relies on the activities 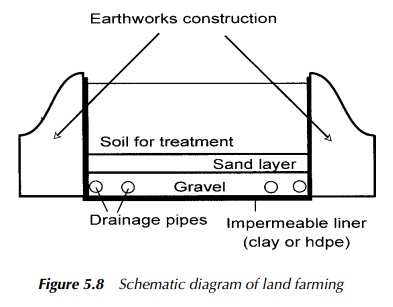 of indigenous micro-organisms to bring about the remediation, though specialist bacteria or fungi can be added if required. The soil to be treated is laid on a sand layer, which itself stands on a gravel bed, through which a series of drainage pipes have been laid. An impermeable clay or polymer lining isolates the whole system from direct contact with the underlying ground. Water and nutrients are added to stimulate biological activity and soil aeration is maintained by means of turning or ploughing.

The inherent simplicity of the process, however, makes its effectiveness highly dependent on soil characteristics and climatic conditions. For example, heavy clay soils, make attaining adequate oxygenation difficult and uniform nutrient distribution is almost impossible to achieve. In colder climes, it may be necessary to cover the soil to overcome the worst effects of the weather.

Throughout the treatment itself, a process of sampling and monitoring helps to assess progress and compliance with required standards and, at completion, the treated soil can be removed either for return to original site or use elsewhere.

In some respects, soil banking is an inverted version of the previous system, ranging from a long row of soil at its simplest, to a more engineered approach, with aeration pipes, a drainage layer, impermeable liner and a reservoir to col-lect leachate.

Just as with the previous approach, soil is excavated and screened, often also being stored prior to treatment. As the name suggests, the soil to be processed is formed into banks, sometimes with the addition of filler material like chaff, wood chips or shredded organic matter, if the character of the contaminated soil requires it to improve the overall texture, ease of aeration, water-holding capacity or organic matter content. This technique is sometimes termed ‘soil composting’ because of the similarity it has with the windrow method of treatment for biowaste material. It is not a true example of the compost process, though there are many functional parallels between these procedures and the same windrow turning equipment may be used in either. Often these rows are covered, either with straw or synthetic blanketing materials, to conserve heat and reduce wash-out. Accordingly, this method is generally better suited to colder and wetter climates and is typically faster than land farming. Indigenous micro-organisms are again the principal agents of remediation, though specialised bacterial or fungal cultures can be introduced as required, and nutrients added to optimise and enhance their activities.

To further boost the speed and efficiency of this treatment approach, partic-ularly when space is limited, a more sophisticated version, often termed ‘engi-neered biopiling’, is sometimes used to ensure greater process control. Leachate is collected in a reservoir and recirculated through the pile to keep the soil moist and return the microbes it contains and a series of pipes within the pile or the underlying drainage layer forces air through the biopile itself. The increased air flow also permits VOCs to be managed more efficiently and having the whole system above an impermeable geotextile liner prevents leachate migration to the underlying ground.

In both versions of soil banking, a regime of sampling and monitoring is established which again aids process assessment and control. After treatment is concluded, the soil may be returned to the original site for use, or taken elsewhere.

Both land farming and soil banking are relatively unsophisticated approaches, effectively utilising the mechanisms of natural attenuation to bring about the necessary clean-up, though enhancing and accelerating the process, having first isolated, concentrated and contained the material to be treated. The final com-monly encountered technology to be described in this section is a more engineered approach, which works by increasing the levels of water, nutrients and dissolved oxygen available to the microbes.

In most respects, this system shares essentially similar operating principles to the activated sludge system described in the next, which is used in treating effluents. Figure 5.9 shows a schematic representation of this method. 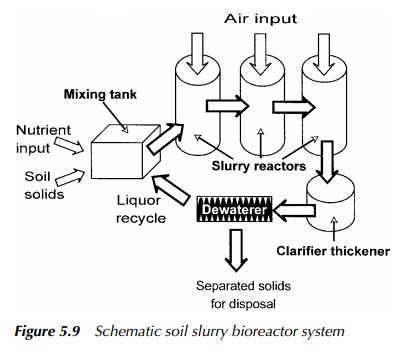 After excavation, the soil is introduced into a mixing tank, where a slurry is produced by combining it with water. Nutrients are then added to stimulate microbial growth. The suspension formed is transferred to a linked series of well-aerated slurry reactors, and micro-organisms within them progressively treat the contaminants. Clarifiers and presses thicken the treated slurry and dewater it, the recovered liquid component being recirculated to the mixing tank to act as the wetting agent for the next incoming batch of soil, while the separated solids are removed for further drying followed by reuse or disposal.