Factors Affecting the use of Bioremediation

It is possible to divide these into two broad groups; those which relate to the character of the contamination itself and those which depend on environmental conditions.

Factors Affecting the use of Bioremediation

It is possible to divide these into two broad groups; those which relate to the character of the contamination itself and those which depend on environmental conditions. The former encompass both the chemical nature of the pollutants and the physical state in which they are found in a given incident. Thus, in order for a given substance to be open to bioremediation, clearly it must be both susceptible to, and readily available for, biological decomposition. Generally it must also be dissolved, or at the very least, in contact with soil water and typ-ically of a low – medium toxicity range. The principal environmental factors of significance are temperature, pH and soil type. As was stated previously, biore-mediation tends to rely on the natural abilities of indigenous soil organisms and so treatment can occur between 0 – 50 ◦C, since these temperatures will be tol-erated. However, for greatest efficiency, the ideal range is around 20 – 30 ◦ C, as this tends to optimise enzyme activity. In much the same way, a pH of 6.5 – 7.5 would be seen as optimum, though ranges of 5.0 – 9.0 may be acceptable, depen-dent on the individual species involved. Generally speaking, sands and gravels are the most suitable soil types for bioremediation, while heavy clays and those with a high organic content, like peaty soils, are less well indicated. However, this is not an absolute restriction, particularly since developments in bioremedi-ation techniques have removed the one-time industry maxim that clay soils were impossible to treat biologically.

It should be apparent that these are by no means the only aspects which influence the use of remediation biotechnologies. Dependent on the circum-stances; nutrient availability, oxygenation and the presence of other inhibitory contaminants can all play an important role in determining the suitability of bioremediation, but these are more specific to the individual application. A num-ber of general questions are relevant for judging the suitability of biological treatment. The areas of relevance are the likes of the site character, whether it is contained or if the groundwater runs off, what contaminants are present, where they are, in what concentrations and whether they are biodegradable. Other typi-cal considerations would be the required remediation targets and how much time is available to achieve them, how much soil requires treatment, what alternative treatment methods are available and at what cost.

Clearly then, there are benefits to the biological approach in terms of sus-tainability, contaminant removal or destruction and the fact that it is possible to treat large areas with low impact or disturbance. However, it is not without its limitations. For one thing, compared with other technologies, bioremediation is often relatively slower, especially in situ, and as has been discussed, it is not equally suitable for all soils. Indeed, soil properties may often be the largest sin-gle influence, in practical terms, on the overall functional character of pollution, since they are major factors in modifying the empirical contamination effect. The whole issue may be viewed as hierarchical. The primary influence consists of the contaminants themselves and actual origin of the contamination, which clearly have a major bearing on the overall picture. However, edaphic factors such as the soil type, depth, porosity, texture, moisture content, water-holding capacity, humus content and biological activity may all interact with the primary influences, and/or with each other, to modify the contamination effect, for better or worse. Figure 5.3 is a simplified illustration of this relationship. 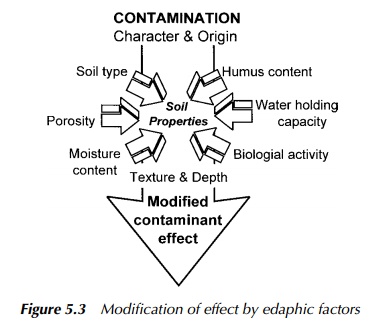 Hence, it is not enough simply to consider these elements in isolation; the functional outcome of the same contaminant may vary markedly, dependent on such site-specific differences.

After consideration of the generalised issues of suitability, the decision remains as to which technique is the most appropriate. This is a site-specific issue, for all of the reasons discussed, and must be made on the basis of the edaphic matters mentioned previously, together with proper risk assessment and site surveys.

At the end of all these studies and assessments, the site has been investigated by desk top and practical means, empirical data has been obtained, the resident con-tamination has been characterised and quantified, its extent determined, relevant risk factors identified and risk assessment has been performed. The next stage is the formulation of a remediation action plan, making use of the data obtained to design a response to the contamination which is appropriate, responsible and safe. At this point, having obtained the clearest possible overview, technology selection forms a major part of this process.

When this has been done, and approval has been gained from the relevant statu-tory, regulatory or licensing bodies, as applicable, the last phase is to implement the remediation work itself.