1. What are the advantages of CMOS?

The advantages of CMOS are

Its Propagation delay is low with improved noise margin.

These circuits take advantage of the fact that NMOS and PMOS Transistors can be fabricated on the same substrate. It has lowest packaging density, high speed and improved noise immunity.

ROM or Read Only Memory, Computers almost always contain a small amount of read-only memory that holds instructions for starting up the computer. Unlike RAM, ROM cannot be written to. It is non-volatile which means once you turn off the computer the information is still there.

PROM, short for programmable read-only memory A PROM is a memory chip on which data can be written only once. Once a program has been written onto a PROM, it remains there forever. Unlike RAM, PROM's retain their contents when the computer is turned off. The difference between a PROM and a ROM (read-only memory) is that a PROM is manufactured as blank memory, whereas a ROM is programmed during the manufacturing process. To write data onto a PROM chip, you need a special device called a PROM programmer or PROM burner. The process of programming a PROM is sometimes called burning the PROM.

4. Classify the basic families that belong to the bipolar families and to the MOS families. 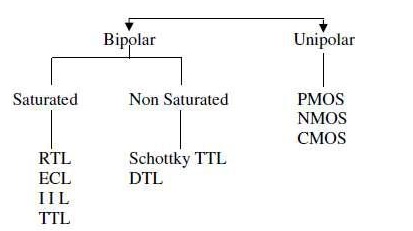 FPGA refers to Field Programmable Gate Array. The field-programmable gate array (FPGA) is an integrated circuit designed to be configured by the customer or designer after manufacturing—hence "field-programmable". The FPGA configuration is generally specified using a hardware description language (HDL), similar to that used for an application-specific integrated circuit (ASIC). FPGAs can be used to implement any logical function that an ASIC could perform. The ability to update the functionality after shipping, and the low non recurring engineering costs relative to an ASIC design (not withstanding the generally higher unit cost).

FPGAs contain programmable logic components called "logic blocks", and a hierarchy of reconfigurable interconnects that allow the blocks to be "wired together" somewhat like a one-chip programmable breadboard. Logic blocks can be configured to

perform complex combinational functions, or merely simple logic gates like AND and XOR. In most FPGAs, the logic blocks also include memory elements, which may be simple flipflops or more complete blocks of memory.

6. Draw the general structure of PAL. 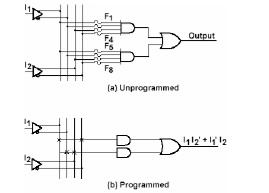 7. Which memory is called volatile? Why?

RAM is called volatile memory, because the content stored in this will be erased when power is switched off.

Programmable logic Array (PLA) is a type of fixed architecture logic devices with programmable AND gates followed by programmable OR gates.

No of address lines required = 12

Memories that consist of circuits capable of retaining their state as long as power is applied are known as static memories. Eg RAM

We can read from and write into the RAM, so it is called as read/write memory. It is a volatile memory, i.e. it cannot hold data when power is turned off.

15.   How is individual location in a EEPROM programmed or erased?

Data is stored as charge or no charge on an insulated layer. The insulating layer is made very thin therefore a voltage as low as 20 to 25V can be used to move charges across the thin barrier in either direction for programming or erased. EEPROM allows selective erasing at the register level.

16.   What is meant by static and dynamic memories?

Memories that consist of circuits capable of retaining their state as long as power is applied are known as static memories. Dynamic RAM stores the data as a charge in capacitor.

17. Whether ROM is classified as a nonvolatile storage device? Why?

It stores data that are used repeatedly in system applications such as tables, conversions or programmed instruction for system initialization and operations. ROM retains stored data when power is off and are therefore nonvolatile memory.