Communication may be broadly defined as the transfer of information from one point to another. When the information is to be conveyed over any distance a communication system is usually required.

For optical fiber communications the system shown in Figure 1.1(a) may be considered in slightly greater detail, as given in Figure 1.1(b). In this case the information source pro- vides an electrical signal to a transmitter comprising an electrical stage which drives an optical source to give modulation of the light wave carrier. The optical source which pro- vides the electrical–optical conversion may be either a semiconductor laser or light-emitting diode (LED). 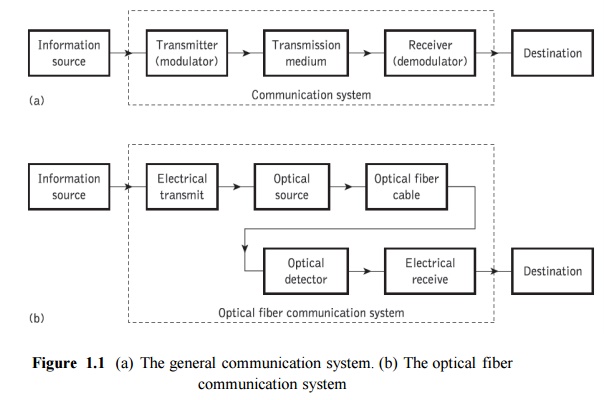 The optical carrier may be modulated using either an analog or digital information signal. In the system shown in Figure 1.1(b) analog modulation involves the variation of the light emitted from the optical source in a continuous manner. With digital modulation, however, discrete changes in the light intensity are obtained (i.e. on–off pulses). Although often simpler to implement, analog modulation with an optical fiber communication sys- tem is less efficient, requiring a far higher signal-to-noise ratio at the receiver than digital modulation. Also, the linearity needed for analog modulation is not always provided by semiconductor optical sources, especially at high modulation frequencies. For these reasons, analog optical fiber communication links are generally limited to shorter distances and lower bandwidth operation than digital links.

The transmission of light via a dielectric waveguide structure was first proposed and investigated at the beginning of the twentieth century. In 1910 Hondros and Debye conducted a theoretical study, and experimental work was reported by Schriever in 1920. However, a transparent dielectric rod, typically of silica glass with a refractive index of around 1.5, surrounded by air, proved to be an impractical waveguide due to its unsupported structure (especially when very thin waveguides were considered in order to limit the number of optical modes propagated) and the excessive losses at any dis- continuities of the glass–air interface. Nevertheless, interest in the application of dielectric optical waveguides in such areas as optical imaging and medical diagnosis (e.g. endoscopes) led to proposals for a clad dielectric rod in the mid-1950s in order to overcome these problems. This structure is illustrated in Figure 2.1, which shows a trans- parent core with a refractive index n1 surrounded by a transparent cladding of slightly lower refractive index n2. Theinvention of the clad waveguide structure led to the first serious proposals by Kao and Hockham and Werts, in 1966, to utilize optical fibers as a communications medium, even though they had losses in excess of 1000 dB km−1.

These proposals stimulated tremendous efforts to reduce the attenuation by purification of the materials. This has resulted in improved conventional glass refining techniques giving fibers

with losses of around 4.2 dB km. Also, progress in glass refining processes such as depositing vapor-phase reagents to form silice allowed fibers with losses below 1 dB km to be fabricated.

Most of this work was focused on the 0.8 to 0.9 μm wavelength band because the first generation of optical sources fabricated from gallium aluminum arsenide alloys operated in this region. However, as silica fibers were studied in further detail it became apparent that transmission at longer wavelengths (1.1 to 1.6 μm) would result in lower losses and reduced signal dispersion. This produced a shift in optical fiber source and detector technology in order to provide operation at these longer wavelengths. Hence at longer wavelengths, especially around 1.55 μm, typical high-performance fibers have losses of 0.2 dB km.

As such losses are very close to the theoretical lower limit for silicate glass fiber, there is interest in glass-forming systems which can provide low-loss transmission in the mid infrared (2 to 5 µm) optical wavelength regions. Although a system based on fluoride glass offers the potential for ultra-low-loss transmission of 0.01 dB kmat a wavelength of 2.55 μm, such fibers still exhibit losses of at least 0.65 dB km properties of silica fibers.

In order to appreciate the transmission mechanism of optical fibers with dimensions approximating to those of a human hair, it is necessary to consider the optical waveguideing of a cylindrical glass fiber. Such a fiber acts as an open optical waveguide, which may be analyzed utilizing simple ray theory. However, the concepts of geometric optics are not sufficient when considering all types of optical fiber, and electromagnetic mode theory must be used to give a complete picture. The following sections will therefore outline the transmission of light in optical fibers prior to a more detailed discussion of the various types of fiber.