The materials in which the electrical conductivity lies between conductors and insulators are called semiconductors. They have resistivity value between 10–4 to 0.5 m . The electrical conductivity of semiconductor increases, when we added to impurities and by increasing the temperature and it is contrary to the metals. They have negative temperature Coefficient of resistance and which are formed by covalent bonds. 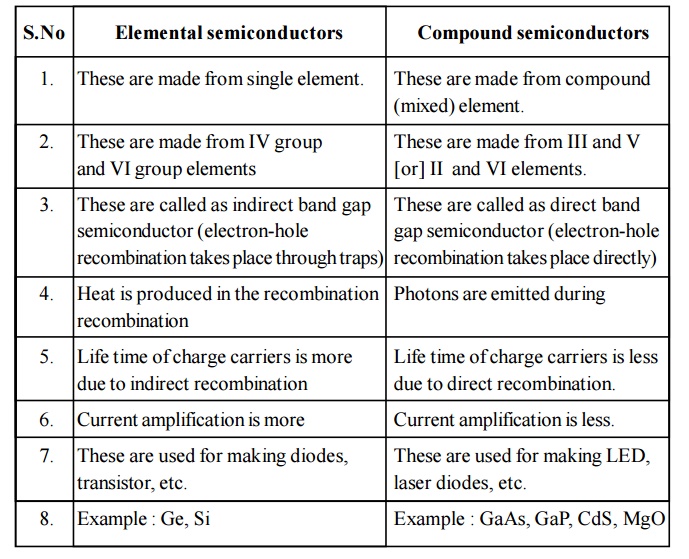 These are made from single element. (mixed) element.

These are made from IV group and VI group elements

Heat is produced in the recombination

Life time of charge carriers is more due to indirect recombination

These are used for making diodes, transistor, etc.

These are made from compound

These are made from III and V [or] II and VI elements.

Photons are emitted during recombination

Life time of charge carriers is less due to direct recombination.

These are used for making LED, laser diodes, etc.

3 What are intrinsic semiconductors?

4 What is meant by compound semiconductor? Give an example.

The compound Semiconductor is a semiconductor compound composed of elements from two or more different groups of the periodic table.

It is an impure semiconductor made by doping process thereby reducing the band gap up to 0.01 eV.

In this case of N-type semiconductor, the donar energy level is very close to the unfilled energy band (Conduction band). So it can easily donate an electron to that unfilled state.

In this case of P-type semiconductor, the acceptor energy level is very close to the filled energy band (Valance band). So it can easily accept the electrons from the filled state.

3.  Donor level lies close to the bottom of the conduction band

3.  Acceptor level lies close to the top of the valence band.

7.  Sketch the variation of Fermi level in intrinisic semiconductor. 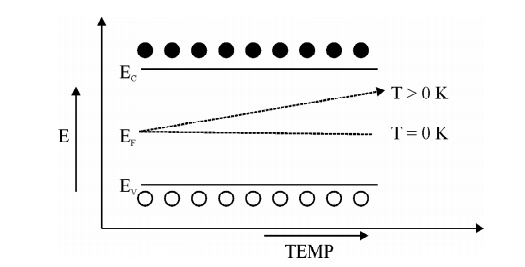 At T = 0 K, the Fermi level lies exactly in midway between conduction band and Valence band.

At T > 0 K, the Fermi level rises slightly upward since.

8.What are donor and acceptor impurities?

A semiconductor in which the impurity atoms are added by doping process is called Extrinsic semiconductor. The addition of impurities increases the carrier concentration and conductivity. There are two types of impurities.

Therefore for intrinsic semiconductor even it impurity is added to increase ne there will be decrease in nh and hence the product nenh will remain constant. This is called Law of mass action.

10. Sketch the variation of Fermi level with temperature for various concentration in P-type semiconductor.

mid way between the acceptor level and valence level.

If the impurity atoms are increased from 10 21 atoms / m3 to 10 24 atoms / m3, the hole concentration increases and hence the Fermi level decrease.

11. Sketch the variation of Fermi level with temperature for various concentration in N-type semiconductor. 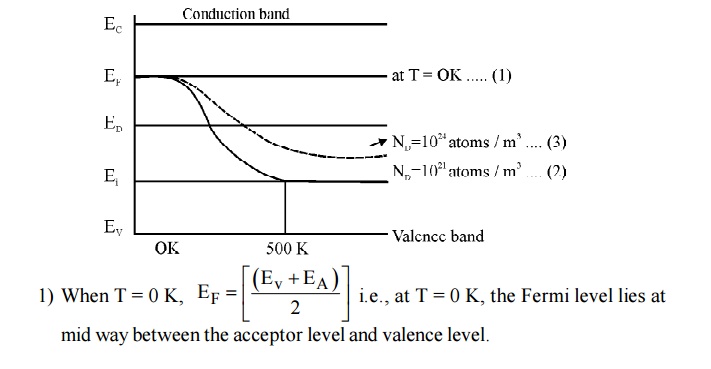 If the impurity atoms are increased from 10 21 atoms / m3 to 10 24 atoms / m3 , the hole concentration increases and hence the Fermi level decrease.

12.What is pair production or generation?

When an energy is supplied to the semiconductor, the covalent bonds are broken and the electrons are raised from valence band to conduction band and a vacant site is created in the valence band. It is called pair production or generation of electron-hole pair.

Recombination is the conversion of a free electron into a bound electron by occupying a vacant site. An electron jumps from the conduction band to the valence band vacant site is called as band to band recombination of electron-hole pair.

If a semiconductor or a conductor carrying current (I) is placed in a magnetic field (B), an electric field is produced in the direction normal to both the current and magnetic field. The generated voltage is called the Hall voltage (VH) and the field is called Hall field(EH).

15. What are the applications of hall effect?

It can be used to determine whether the given material is metal, insulator, or semiconductor and the type of the semiconductor.

It can be used to determine the power flow in an electromagnetic wave.

16. Give on externisic semiconductor. How will you find whether it is n-type (or) P type.

18. State the properties of Semiconductors.

They are formed by covalent bonds.

They have small energy gap.

They have an empty conduction band and almost filled valence band 0K.

They have negative temperature coefficient of resistance.

At 0 K it behave as insulator.

19.What are the differences between conductor and a semiconductor?

The conductor is a material which has low resistivity

They will not behave as an insulator at any temperature.

They have positive coefficient of resistance

The semiconductor is a material which has resistivity lying between the conductor and an insulator.

The pure form of semiconductor can behave as an insulator at 0K.

They have negative temperature coefficient of resistance.

20. Why do we prefer silicon for transistor and Ga As for Laser diodes?

Silicon in an indirect band gap semiconductor for which the life time of the charge carriers is more and the current amplification is also very high. Hence it is preferable for use it in transistor.

Ga As is a direct band gap semiconductor, in which electrons and holes recombine directly to produce photons and hence used in laser diodes.

21. What happens when the temperature increase in the case of semiconductor and conductor?

With increase of temperature the conductivity of semiconductor increase and hence resistivity decrease because more and more charge carriers are created by the temperature.

22. Write the expression for electrical conductivity of an intrinsic semiconductor.

23.Give the carrier concentration of an intrinsic semiconductor.

The carrier concentration A an intrinsic semiconductor is